Dojo Danger from Kihon is the kind of game you can't wait to be good at. One part strategy and one part arcade physics, the setup is a bit reminiscent of the SQUIDS series, putting you in control of a group of heroes who can be shot around the screen in order to defeat the bad guys. This time around, though, you get to play as a band of ninjas ridding the world of a zombie invasion by smacking into them and knocking them into spike traps! 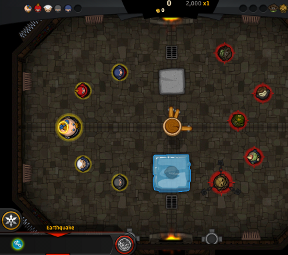 The simple aim and fling gameplay of Dojo Danger means you'll be able to pick it up and start having fun right away. Your team of ninjas take turns making their moves before the enemy team makes their own moves. Tap and drag an active member to set direction and velocity, then release and watch them fly. It's a bit like a hands-on version of a billiards game, though instead of colored balls and safe little pockets it's just killer ninjas and dead zombies left and right.

Spicing things up beyond the normal fling-based gameplay, Dojo Danger features a massive variety of power-ups ( called boosters) you can unlock or purchase via the in-game store. Everything from healing powers to force fields and sniper-like laser aiming can be equipped and used during battle, and learning when to unleash these items is key to scoring victory and completing some of the more difficult mission challenges. 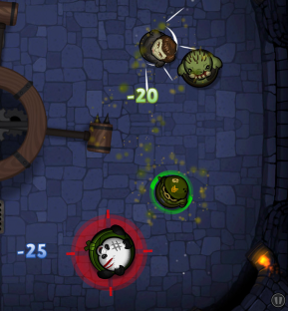 Analysis: Dojo Danger doesn't mess around when it comes to content. The game features over 100 levels, 30 unique characters to unlock, local multiplayer with a set of dedicated maps, 20 different power-ups, and plenty of things to buy in the shop. You even get to play as the zombies in the second campaign, exacting a bit of revenge on those do-gooding ninja folk.

Strategy is a big part of the Dojo experience, making the game much more than a blind arcade romp with gigantic eyeballs bouncing around. You have to think about how to attack, where to move, which power-ups to use, which parts of the environment to break and which to use as shielding. It's surprisingly difficult, but just the sort of difficulty that encourages you to keep playing until you get good at it.

The interface in Dojo Danger leaves a bit to be desired, as most of the menu screens and inventory areas feel like a clustered mess of icons and information. It's overwhelming at first, but once you get into the finer details of the game, you'll actually put some of these extras to use. Don't be frightened by scary mystery icons!

A nice premise with balanced gameplay that walks the line between crazy action and thoughtful tactics. Dojo Danger is filled with content and has a lot of replay value, making it an easy escape from the humdrum of your average workday.