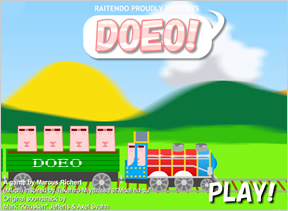 One sign that someone has done something right in the world is when someone creates a tribute to them. There are lots of bands out there that pay homage to legends like The Beatles, The Stones, and Chicago, for example. Tributes even happen in the gaming world, such as the tribute to On's Grow series, and Raitendo's Doeo is no different.

A tribute to SKT's Moai series, Doeo takes the same basic principle of frantically mousing over moving targets while racking up enough points to move to the next level. Instead of the statuesque Moai that inhabit previous games, here you try to collect as many pink and blue Doeo as quickly as possible. 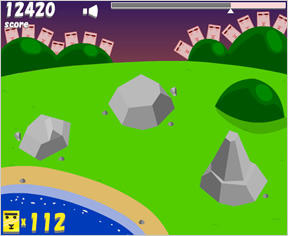 This take on the game has two levels of difficulty to choose from, easy and hard. While the easy level challenges you to grab 100 pink Doeo in 40 seconds (remember, no clicking required, just mouse over them to nab them), the hard level ups the ante by throwing in strings of blue Doeo that appear for less time, but are worth more points. These blue Doeo are important because in the hard mode, you have to find 200 Doeo in the same amount of time... good luck!

Analysis: While most tribute games are carbon copies of their predecessors, Doeo seems to add a few new elements to the Moai standard. Having two levels of difficulty creates for some variation in the challenge, because your mind has to work faster to grab the extra Doeos as they fly on and off the screen in a split second. While similar to the "zoom" function in New Nest of Moai, adding a second color of Doeo to the mix works better because you don't have to remember to click to find more targets. (Or was I the only one who forgot to zoom in for more Moai?)

The original Moai was quirky, random, and humorous. Doeo seems to have all those same features plus a bag of chips. While Moai levels focused mostly on one scene of gameplay, the Doeo environments are constantly changing and you'll find yourself moving rapidly from a conference room table to an airborne adventure, all within the same level. And while I do miss the a cappella music of the original Moai series, the Doeo instrumental soundtrack has enough pizzazz and variety to keep me bouncing in my seat. As a devout fan of the original Moai games, Doeo does an excellent job of maintaining the same jubilant mood in such a hilarious game as its inspiration.

That much said, get ready and Go Doeo!

Well, that was fun. 39460 on my first try in easy. Haven't tried hard, but I'm not sure if I need that much of a challenge this early in the morning.

Well I found it quite easy and a good timewaster.

...And thus begins the oversaturation of "Grab-the-Thingy" Flash games. Oh well, at least this one got rid of the Zoom feature and gave a delightfully diverse selection of stages (and events that happened in them).

I'd rather not find out what a Doeo is, if there is a reason behind it; this is one of those things that's funnier when it doesn't make sense.

It did indeed make me laugh out loud...especially when I lost the last stage with only 95! ACK!!! Very cute, very nice waste of a few minutes.

"While the easy level challenges you to grab 100 pink Doeo in 40 seconds,the EASY level ups the ante by throwing in strings of blue Doeo that appear for less time, but are worth more points."

I guess you wanted to say HARD level there.

And let me grab this opportunity to tell you that I like your revisions a lot. There is something in the wording of these that grab me.

Wow. This game is so popular, it reached their bandwidth limit.

Actually, the game isn't really that popular, I think it was jayisgames.com alone that brought the site down (I had a ridiculously low bandwidth limit, upgraded the account now). Embarrassing but true :)

The site should be back up now.

Is anyone else unable to make the Raitendo site display with Firefox?

It worked allright under Firefox here.

I liked the defense against the "tab" exploit, but it would be really nice if I could pause between levels

I absolutely enjoyed this game, it was a lot of fun! :D

I love how little sense this makes. Especially stage 3. I thought nothing would top Nest of Moai, but this is just as good as SKT's games.

Just wanted to let people know that a non-site-locked version of Doeo has been released, and is available for download.

Get it from Newgrounds.com here

If your reading this, Raitendo, can you tell me where I can get the music or the name of the music? Thanks!

Wait, uheh, Raitendo? Is this a joke? The file linked to pictures of Doeo, not the game...

Duz anyone know how to get the music??? I love ALL uv the music in it!!! I want it!! Especially the music from the level with the news persons!!!

Linkzcap, it's a download package with a couple of thumbs for webmasters who want to put the game online, but it contains an swf-file as well (i.e. the game)

Oh, well I geuss I don't have the program needed to open the game then...

I can't get enough of that awesome music! And the little doeos are cute in a wierd kind of way. I can beat EASY with doeos to spare, but I've tried HARD and found it to dificult. Ah well, very nice game.

haha I really like the, what should we call it? level design. My favorite is the one with the two commentators.