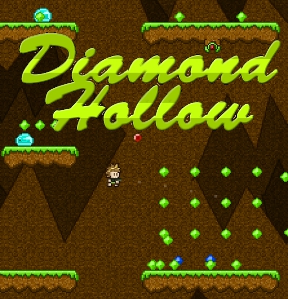 Since the dawn of time, man has collected. From the day the first humans started picking up mammoth bones because one might make a better club than another to the modern Pokémon craze, collection has ingrained itself in the human psyche. Diamond Hollow, a new arcade platformer created by Arkeus for the 48-hour game development competition Ludum Dare, plays right to this compulsion by encouraging players to load up on diamonds like it's going out of style as they try to climb to the top of an endless cavern.

Use the [WASD] or [arrow] keys to move your little diamond-grabbing dude around while using the [mouse] to aim and fire your weapon. You can shoot in any direction regardless of the way you're moving, which is not only convenient but a lifesaver when you're being assaulted by turrets on the walls and ceiling and pesky slimes on the platforms that you're trying to climb on.

Colored diamonds are strewn throughout the cavern and enemies that you blast will also explode into piles of bling. You can collect these to spend on upgrades for your character after each death. There are a wide variety of upgrades available that will improve traits like your speed, jump height, weapon damage and resilience to knockback. As you improve your character, it becomes easier to climb higher and in turn gather more valuable diamonds to improve your character even further. 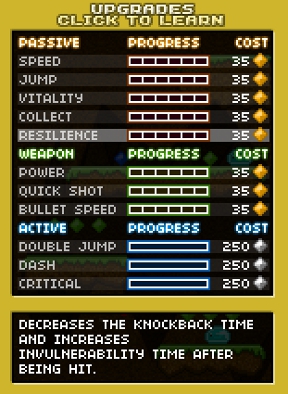 Analysis: You might not think that an enjoyable and complete game could come out of only 48 hours of development time, but Ludum Dare entries tend to be solid and Diamond Hollow is no exception. This isn't a pretentious art game or a brain-wracking escape, this is down-and-dirty arcade action through and through and it succeeds spectacularly on that level.

The most enjoyable aspect of Diamond Hollow is the upgrade system. Without it, the game would be, well...hollow. The ability to upgrade your character keeps you pushing to grab more and more diamonds and climb higher and higher just to see how powerful you can get. At the same time, this might be the game's biggest flaw, because your character can get pretty darned powerful. By the time you've played five or six rounds you could be able to leap nearly the screen's height, double-jump, defeat early enemies in a single shot and fire bullets at a hilariously fast rate. The enemies become more damaging but not any smarter or more difficult to avoid, so it's easy enough to rack up crazy heights and diamond hauls after a few upgrades. At that point the game is essentially a high score competition to see how far you can get, which may or may not appeal to players who enjoyed upgrading.

Your character is also a bit too weak early on, especially since most enemy attacks pre-upgrade will launch you back into another zip code and send you careening off the side of platforms, but the upgrades come quickly enough that this isn't a huge issue. By the time you've played long enough to get upset about seemingly cheap deaths, you've racked up enough diamonds to remove the problem.

Diamond Hollow is one of those games that takes a fairly simple concept and runs with it. This is no-frills platforming at its finest and any fans of the genre should give it a shot. The upgrade system keeps the game fresh for awhile and after the upgrades run out perfectionists can still aim for the top. Diamonds are a gamer's best friend, after all, so start looting!

By the look of some aspects, this guy loves Portal 2.

Very impressive effort for a 48 hour design process. Well done to the creators.

Fun game. Perfectionists will love recognizing the patterns for the land shapes and remebering what way to go. The upgrading is in depth, and detailed. I'm pretty sure that there's no end though...it's always just 20 more meters.

I died at 10 meters, and it told me 20 more meters XD I'm fairly confident it's endless. My best is 1113m. It's too bad it doesn't tell you your best run for diamond-collecting, or have anything you can do with hard-earned diamonds after you've gotten all the upgrades. Pretty great for Ludum Dare, though!

Unplayable for me. It's so processor intensive it makes my dual-core 2.4GHz machine grind to a halt.

Quite a good game. A little too short on upgrades, and it gets really difficult at 1500+ meters. I just loved the Portal 2 references ( SPAAAAAAACE ).

New rule of thumb for me and flash games: If the designer can't figure out how to let players separately control the music and the sound fx, it is automatically an unplayable game. I abhor head-pounding techno beats, but I also dislike playing games without sounds.

From the other comments, I'm sure this game (and others without separate sound & music controls) is great fun to play, but not for me.