[Please note that this game received its rating due to gore, violence, cannibalism, a passing mention of a sexual assault, and several scenes of animal cruelty which may be upsetting to certain players.]

Desperate Love Feast, a freeware indie horror adventure game by Akira Takaba (and translated by Hiroko), is about what happens when love and obsession are dialed up to eleven. Takuma awakens in a basement somewhere, with writing on the wall inviting him to come play. He quickly realises this has everything to do with the brutal murder of his family several years ago by someone he thought was a friend, but will he find answers and justice, or is there no way to escape from someone who loves you more than anything? Use the [arrow] keys to move and the [spacebar] to interact, while [ESC] opens the menu where you can save your game any time you like. There are five different endings to uncover, and some of them will end the game sooner than others, so make sure you save in different slots and think carefully about what you decide to do. 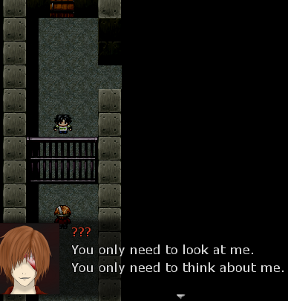 Takuma will usually prompt you to use the correct item whenever you need to, making him approximately 100% more useful than your average adventure game protagonist. Unfortunately, this also makes the game 100% easier than your average adventure game, with most of the challenge coming from figuring out how to get the game's "true" (still insane) ending. Most of that winds down to backtracking over and over, which isn't anywhere near as intuitive as the first half of the game. Still, it's short at less than an hour for your average playthrough, and extremely creepy even though the plot's supernatural elements could have used some better development. If you're looking for an unsettling horror story with a few supernatural twists you can complete in a single sitting, Desperate Love Feast is worth checking out... and hopefully we see both more from the developer (who still has several untranslated horror games), and a sequel, in the future.

You might want to mention Cannibalism (though stupid me should've figured that out from the title).

I want to like this game, but there's just too many missteps.

Other then flashbacks, and reading some notes, you only interact with Chihiro once before the ending. If we had more interactions with their present versions to contrast with the flashbacks, it'd make the impact stronger

Your main antagonist (after the black dog) is an utterly ridiculous-looking doll who only chase you in one screen, and all other encounters are set events that are easy to escape from with smashing the Z button. It completely killed any tension I might've had because I'm either laughing or just confused at who'd thought that would be scary.

Sometimes - especially with going for Common/True ending, it feels like there's too much backtracking and wandering around for the next flag - while this game is pretty short, that's just not good.

I pretty much got stuck.
I need to find

Any help?
(I got a little problem with my account, so it shows only question marks instead of my name. My name is Noam Ottolenghi.)

Besides from the easiness of the game, I really loved the story of this game. It's only an hour or so of game play, but the story behind it stays in your heart.

Hello Dora, I'm Hiroko who worked on the localization of this game. I wonder if you do not use my whole name there. That's how I had it under credit as well and that's the name "Hiroko" I go by. I really appreciate it if you can edit that.

Thanks, Hiroko, I apologise for the mistake and have corrected it. :) Hopefully you translate more games in the future for us to write about!

I have added a cannibalism warning to the note in the review, though I was mostly interested in bringing up the mention of sexual assault (although it is just a mention) because I know some people find that very upsetting.

Hi Noam. Not sure what's going on with your account, though it looks to be a problem with how Facebook is displaying your name since you're logged in with that. :) As to your question,

if it's the eye I'm thinking of, you're looking for the one that's somewhere "sweet". One of the two wineglasses on the table in the room (I believe) adjacent or nearby the doll's room says it has a "sweet smell" if you examine it. That's where one of the eyes is, and the one that gave me the most trouble.

Dora, thank you so much!

But most of all thank you so much for playing the game and it is rather exciting that the game was picked up to be reviewed by you. :)
I hope you'll play the the sequel too!

You must free the white dog, Shin, without him eating you.

There is a piece of meat on the kitchen table that you can take and give to him. The key to his cage is in the hole in the wall by the Whisper Room. Interact with the bars of his cage to give him the food BEFORE you unlock his cage, otherwise he'll think you're dinner!

Then you must follow him around until all his cut scenes are finished.

You must also have two items in your possession:

The baseball and the sword. Although you get the baseball earlier, the dog will take it from you at some point in its cut scenes. You need to take it from the dungeon room (by the bed) in order to be ready for the end of the game. However if you haven't taken the sword yet you must leave to the hallway and then come back in order to find it. Picking it up triggers the dog's last cut scene.

In addition to the criteria for the Common Ending, there is a small side plot you must complete. There is a strange man in the house who doesn't say much and seems to be looking for something. You were warned earlier not to talk to him but you should follow him around, talking to him at least twice each time to develop his plot.

Turns out he's looking for that frightening Satan book that seems fairly out of place in the game. When he says he will remember your name, you are finished with his side plot.

Now at the final showdown, choose Don't Give Up, and when Chihiro tells you to kill him, you have a choice to kill him or not kill him. Choose to not kill him and you will get the True Ending (killing him triggers the Common Ending).

Watch until the very end because after the credits there is a suggestion of a really creepy sequel.

There are really no happy endings in this game, but some are happier than others. Neat little game, very well done!

Finished it a few minutes ago. This is what I think about it.

This is an excellent game. The story is beautiful, and very sad, and it blends pretty well in the game. I really liked that the game starts without giving any information about the characters and the story, and you need to uncover it by yourself.

The characters are great. I liked that both the protagonist and antagonist are neither fully good nor bad.

The atmosphere is well made, though it's mainly unsettling and not really scary.

And about the endings.
The bad endings are mainly disgusting.
The common ending is just really really sad.
The true ending is sad, but it has a little hope and happiness in it, just enough to be perfect.

And for the endings, I can just tell you this: (HINTS)

And the better ending you get, the more you uncover from the story.

For the common ending youll need Shin. Look for him and follow him. He will tell you a lot, and will give you

the power not to give up

But if you want to end it for real. I can just say that you'll need Shin and a very strange man that will remember your name. He will give you

the power of forgivness, the power not to kill

I'll be waiting for more.

While I obviously enjoyed the game enough to review it, I have to say, I'm completely disinclined to sympathize with the antagonist AT ALL.

While it's true he had a fairly crazy, miserable childhood, he also RAPED, MURDERED, AND ATE Takuma's entire family because Takuma had to miss meeting up with him ONE TIME, and murdered, dismembered, and reanimated his sister as a demonic doll just because she was a spoiled brat. That's not tragic. That's INSANE. Right around the time the game told me he had brutally murdered, ate, and also sexually assaulted every member of Takuma's family (the newspaper clippings you find specify the sexual assault), INCLUDING HIS BABY SISTER, I lost all sympathy for him whatsoever, regardless of what happened to him growing up, which is why the "true" ending acting like he was some sort of poor tragic figure baffled me.

People are, of course, entitled to their own opinions and I'm not saying anyone is wrong in their own estimation of Chihiro if they perceive him otherwise, but to me there are some things you can't and shouldn't forgive, and I didn't feel there was sufficient characterisation to make me feel otherwise.

I agree with you that it is pretty impossible to symphathize with the antagonist. He is a bad, and mad, peson who did horrible things because of his madness, and even he himself doesn't deny that he is mad.
But still, the portagonist and antagonist of this game aren't the classical ones. The protagonist is not the all-good hero, but a normal kid, who is undoubtfuly good, but isn't full-good.
The antagonist isn't the all-evil villian either. He is mad, he really is MAD, and he did horrible things, but he did them not from evilness, but other thing, twisted and mad as it is.
I think that added a lot to the game and made it pretty different from most games.