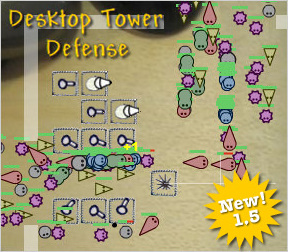 One of our favorite desktop tower defense games, Desktop TD by HandDrawnGames, has just received a substantial upgrade. Along with kicking the visuals and audio up a notch with new sounds and a better interface, Desktop Tower Defense 1.5 includes several new (and expanded) challenge modes to twist your brain in a knot and/or induce frustration. New towers, such as the Boost unit that increases damage nearby towers dish out, helping you combat new enemies such as the morph and dark creeps. The game is also available in five languages, including English, Spanish, German, French and Italian.

It is a great game.

I'd like some more documentation on the new features - particularly the enemies. I've figured out how all the new towers work (I recommend starting a 10K game in order to test them all out before starting a real game), but I have no idea what makes the new critters special (the dark critters seem to have a lot of HP, but is that the only difference? What about the morph critters?)

It's functionally similar to the previous versions of DTD. Only hardcore fans will notice major differences between this version and previous ones.

Boost Tower (only available in hard, challenge, and fun modes): +10-50% damage to touching towers. Ignore the range, if it isn't physically touching (a corner is enough) then it won't work.

Snap Tower (only available where the Boost Tower is): damages everything in its range when you click fire, but is destroyed, making it essentially a bomb. The creator will possibly change it to be more functional, as right now it's mostly useful to get accustomed to juggling.

Dark: Has armor, so only high damage towers will affect them, especially in the boss and later stages. They're also substantially slower than the other creeps, which can actually be detrimental as towers focus on older creeps, not ones farther along into the maze.
(an ability like the towers in Vector TD to pick targets based on speed, strongest, weakest, or closest would alleviate a lot of aggravation)

Morph: Changes into various other creeps as it moves around the field.

There's not a lot of new strategy here, except in the 100 challenges (including the 10k). But there's nothing wrong with that, this is still an amazing game with a breath of fresh air.

There is also a highly active forum community accessible from a tab above the game window.

I was just playing this (version 1) the other day - I can't get enough of TDs! I even cracked open the ol' Warcraft III CD case to play some TDs. Good times... This is a fun upgrade to an already fun game.

I think many of us would strongly disagree with that.

Poor graphics? Quirkly graphics perhaps, but certainly not poor. I find them rather humorous and slightly tongue-in-cheek.

Poor sound? Minimal sound. It can be repetitive, but again, I find it humorous.

Poor strategy? It's up to the player to determine his or her own strategy (through building an adequate maze).

Although, there are some of us who are just die-hard (Desktop) Tower Defense lovers!

I, for one, definitely agree with Ryan. i like the graphics (and am sure many others feel the same) in that the simplicity adds a nice touch to the overall game. also, the strategy is far from poor. the freedom of the game (i.e. how you can choose the path of the creeps by strategically placing your buildings) creates much more strategy than your average TD. this is a great game, and i am not seeing how you find it poor.

I have to say I love the improvements to this game (the sound change is growing on me) it's a lot more polished.

I've played the previous versions loads (and thoroughly enjoyed them with no complaints!), and this is certainly a nice improvement. :)

Doc, I'm down with Ryan. DTD is one of the most interesting games ever posted on JIG, I'd be surprised if it doesn't get an award at the end of the year. In terms of strategy, try to conquer the top of the ladder (or even get the best score for the "jayisgames" group) and we'll talk.

But is there an alternate link? I played it last night, but now that I try to get back on it today, the game won't load for me.

Dr_Pangloss - perhaps it was just a temporary issue? I just tried and the game loaded fine for me. If you do encounter trouble again, I've posted an alternative link above to a version hosted at Kongregate.

Ahh...now it's loading fine. Of course, right? Thanks for the alternate...all the Googles were leading me back to the site that wouldn't load for me. Must have been my Gremlins again. :)

The game has loaded, but there's only a screen with some words: "To play Desktop Tower Defense, please go to: www.handdrawngames.com Paul Pierce 2007 All Rights Reserved - Hot link only please!" What to do, now?

The best part is how they say "doh!" when you kill them.

I really like this game. Highly enjoyable, quirky, fun and a great way to pass the long hours at work. To whichever person created this, I am sincerely grateful, although not grateful enough to bother to find your name. ;)

has anybody beaten the 10k on v1.5
i can only get to level 91 and the air creeps kill me

Nah, the flying ones get me, too. I try to me a column about three towers thick with boost towers-that helps!

Snap towers also stun. Stunning is necessary to kill high-level flying creeps in the 10K and the 100 and maybe Hard.

Boosts do stack, but boosts don't boost other boost towers.

The flying creeps are easy. I like their pizza shape.. makes me want to pick the phone, press 62353535 (pizza hut hotline in Singapore) and say.. "Can I destroy a pizza?"

IF you want to destroy the Flying Creeps easy, just put four of the anti-air towers in the middle where the cross shape is. Upgrade them every few air levels (etc, 1st air level, build 4, 2nd air level, stay, 3rd air level, upgrade all to level 3 and the like.)

Dark enemies are immune to damage from a tower that is the same as the one it last took damage from. IE, 20 pellet towers will only do damage once, as they become immune after the first, but 1 pellet and 1 squirt tower do damage as it changes its immunity after it takes damage from something else. Or at least that's what I think...

got myself and two freinds hooked on this already :)

This is on Rampage mode by the way.

(To get Rampage mode you have to complete all modes, fun, difficult ones, etc) you get 1/4 points in Rampage mode and at the end, as the name implies somewhere around a 50 level amount of creeps charge through in one go.

Did anyone notice that this game is lucky enough to get a Wikipedia page? Seriously.
Go to en.wikipedia.org/wiki/Desktop_Tower_Defense

It's a very awesome game, played many times and it just never runs out of new stuff. But a question: what are immune creeps all about?
PS: To whoever thinks this game has bad graphics... seriously? It's intentional! It's part of the game's design style. Pshaw on those of you.

The dark enemies can only take damage from leveled up towers, which prevents you from spamming level 1 pellet towers to create a maze. I think that the calculated damage uses some formula like

where d is the damage done, p is how much base damage the tower does, and t is the level of the tower (I didn't use the letter l because that letter looks almost exactly like the number 1.)

2,866 Views
5 Comments
chrpa— Jayisgames needs your help to continue providing quality content. Click for details Hi! Weekday Escape has just arrived! This time brings three games only - last week was not a fruitful week. With Selfdefiant we go to another field...  ...

1,443 Views
1 Comment
chrpa— Jayisgames needs your help to continue providing quality content. Click for details Welcome to Mobile Monday! If you are fond of Nicolet's and/or GBFinger Studio's games, there's no point to uninstall their apps after finishing them. The newest games...  ...

2,925 Views
5 Comments
chrpa— Jayisgames needs your help to continue providing quality content. Click for details Good news - Robamimi is still active and creating in Unity! This escape game is a remake of her old game from 2009 - must be one...  ...