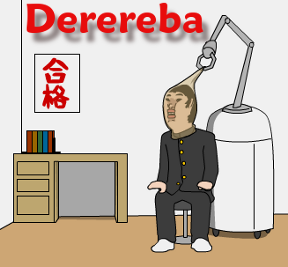 Dereba... Dererereba... Derereba! I don't know how to pronounce it, or even what it means but I love the game! Detarou's latest release is completely Detarou; in other words, it's a wonderfully weird, surreal, delightfully presented and maybe even a little unsettling point-and-click game with three endings to discover.

The goal, of course, is to escape using your mouse to click on objects, add them to your inventory and use them to interact with the characters and the environment. There's also a little puzzle solving to do, but it's really only a smidgeon. In typical Detarou style, collecting and using items is a one-click delight. The trick is figuring out what to use and where, resulting in some of those nice moments of "oohh, right..." The logic is a tad bewildering, but it's there.

Those familiar with Detarou's previous games, Henna Escape and Gold Door, will know how confusing and surreal these games are. I would suggest that quite a bit of the confusion lies in the presence of items that appear to be clickable, but really are not. Many of the items and characters present in the environment are included simply as detail. And some of them, despite their benign presence, lend a wonderful quirkiness to the game. It's worth clicking everywhere just to find them.

Much of the appeal of Detarou games lies in the surprisingly realistic artwork; the posturings of each character and their facial expressions convey so much mood, and despite the apparent lack of a storyline you can't help but feel your imagination stirred into wondering about what the heck is really going on in this house. There's also a delicious anticipation of what lies around each corner, because you know that what's next is will be utterly bizarre and either funny in a left-field kind of way, or almost poignant.

I've Google'd Derereba until my fingers were sore, and I still don't know what it means. The game itself defies any sense of reality, but it's funny, quirky, surprising and a real pleasure to play. And each ending only adds to the enjoyment of play with startling humour.

Located in the cupboard below the stereo.

Located in the Code Box once the code has been entered.

Bottom drawer in the bedroom

The three clues to solving the code box are located:

Pay a coin to get a hint

HaHaHa! I love it! Okay, sorry. This is a dead-end. But it was funny, dontcha think?

Thanks, Chiktionary, for the walkthrough!

Ooh, already stuck. I've clicked everywhere, it seems. I guess I'll just wait for the walkthrough.
I have

Derereba = in this context, "if I can escape" (in a more general context, I would translate as "if I can get out").

a cup, a t-shirt with a code on the back, a device that requires a code and a screwdriver.

a stocking on the schoolboy - face smush! - to get the screwdriver, and a coin on the hint machine - what a disappointment that was.

I'm guessing the next move involves the screwdriver or the cup but no idea where to use them :(

Look carefully in the cupboard under the music system.

Maybe the first number is 8? The torn page stub in the blue book says 8 for me, followed by the edge of a black box, so I've been assuming 8 was the first number - although I haven't found the page itself yet, so I'm fumbling in the dark here! Mind if I ask where you got it from?

I'm out. Not entirely sure how i would go about getting other endings, though.. There must be some stuff i missed.

Ah, cheers Mudeth. Everything makes a lot more sense now (for a given value of sense.)

Except now I've run into the same problem as you had, vis a vis the code. C'est la room escaping vie, I suppose.

turns out my first instinct about the code was right, despite evidence to the contrary. Not sure I follow the logic on the one

@Xixen: You were right about the first digit.

It's 8. Rest remains the same. But then, I got a key, and it opens a door, and it's all very unsatisfying. I'm guessing there's another more comprehensive ending

same here. Although then after I opened the door I went and pottered around the house again without going through it. Now it appears to be locked again, only the key is greyed out and I can't seem to find anything else to interact with. Hmm.

When the Viking lady is looking to her right, hang the red cloth on the hooks.

Man this game is weird.

examine the drawer with the 3 color code on it closely.

I can't figured out the code to the box

I have the note

So that means the code should be

But it doesn't do anything when I put in the code and hit the button.

Got it
Not sure why, but the code is actually

Located in the cupboard below the stereo.

Located in the Code Box once the code has been entered.

Bottom drawer in the bedroom

The three clues to solving the code box are located:

Pay a coin to get a hint

HaHaHa! I love it! Okay, sorry. This is a dead-end. But it was funny, dontcha think?

Thanks, Chiktionary, for the walkthrough!

@Zero-K About the code to the box:

I suspect the intention is that the 8 in a square be read as standing in for the first black square, rather than the black squares themselves being assigned a specific value. Needlessly ambiguous, I think - having the shirt code be clear square, black square, triangle etc. would have been clearer. Or maybe not having that 8 there at all - it doesn't actually help in solving the puzzle.

Also, I found the second ending thanks to mudeth and Zero-K, anyone have any luck on the third?

Being led into traps by pandas makes God cry. And there I was thinking God wasn't going to make a cameo in this game.

The Coin Hint? That is EVIL!

Suggesting that you get a hint by paying a coin but the timer runs out!

Does anyone know what to do with the

So the Fish, the dancing plant, and the 3 orange-people are just for decoration? Same as the Priest, TV, Worm, and impatient guy?

Somehow one of my comments got posted twice. Weird.

Chiktionary, via "Mike" - the guy in a bull costume is the horned lady.

What did I just play?

Sorry, but I just cannot see how the code isn't

One big complaint about this game: that code box.

It made no sense for the code to be 82591. The code on the shirt started with two black squares, and we found out the black square is 2, so the code should have been 22591. If the square with the 8 in it had been black, it would have made sense. But the 8 was in a white square, and I assumed it had nothing to do with the code on the shirt, since there were no white squares there.

That just ruined the game for me. A pity, because I really enjoyed the rest of the game.

I just played the game six times trying to get the secret 3rd ending, and every time I try

there is simply no "panel" by God's head even though I had the coin.

I had to look around on a different forum to figure out why:

You must not use the key in the brown door before you click the green door, and then you will get the "best" ending with happy God!

remind anyone else of the Sudowoodo in Poke'mon Gold and Silver?

That was fun - but I confess I had the walkthrough open entire time!

It looked like there was a small door to the right of the "exit" door. It never came into play, though ,..

Thanks for a fun game and a very helpful walkthrough!

@SkylerF - Thanks for clarifying about the lady. That makes sense! : )

@Lynne - Thanks so much for your kind words. Nothing warms the cockles of a reveiwer's heart more than when people enjoy a game as much as we do, and even better, when they find the walkthrough helps. Thanks! : )

I'd really love to be able to be around when people are playing to assist a la GrinnyP, unfortunately the timezone difference means I'd have to stay up waaaaay later than my bedtime (read: "until the sun comes up").
Glad everyone enjoyed the game though, despite the 'evil' bits. :D

Thanks Islander for the translation! :)
Now I can stop wondering...

Nice little game with original ambiance, just a pity for the codebox enigma.