When you think of rabbits, the thoughts that run through your head probably include carrots, soft cotton tails, big floppy ears and cute widdle bunny wunnies! But as countless TV shows and movies have taught us, woodland creatures have their own secret lives unfolding when they're not scampering around foraging for food. In this case, it involves digging their way through caves and crypts down to hell to rescue their kidnapped bunny rabbit kin from a deranged sorceress. Developed by veteran casual game developer Elliot Pace, Demons Down Under plays like the now-classic roguelike The Binding of Issac, meaning that you'll spend your time exploring baddie-infested rooms in search of keys, potions, and sweet, shiny gold. The [arrow] keys or [WASD] moves your character and the [spacebar] is used to drink potions, while clicking the mouse will employ your weapon, be it a sword, dagger, blunderbuss, or magical laser of doom. What makes Demons Down Under so much fun is the wide variety of weapons and items you can use in each run—killing enemies grants experience and gold, which unlocks a plethora of fancy upgrades. This allows for a bit of replay value, making up for the game's comparatively mild difficulty. Combining this with a collection of unique enemies, a procedurally generated map, and a charming and delightful presentation means that Demons Down Under is a good bit of fun for casual audiences anywhere. 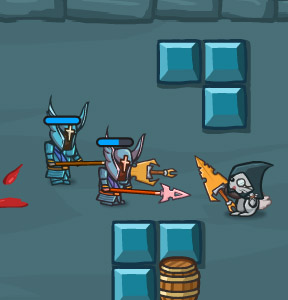 When we say that Demons Down Under plays like The Binding of Issac, we really mean it. From the control scheme to certain areas to the very concept of digging down towards hell, it is immediately obvious where developer Elliot Pace found his inspiration. However, finding inspiration in a modern indie classic is not unheard of, nor by any means a terrible thing. Demons Down Under adopts its own distinct tone. While The Binding of Isaac dealt with dark humour, nightmarish monsters and some serious parental issues, Demons Down Under is about adventure and bunny rabbits, making it immediately more accessible to casual gamers and younger players. Barring a bit of cartoony blood and violence, the game wears this distinction with pride, and its simple, forgiving gameplay reflects that. Though it leaves out the secret rooms, bosses, and strategy that made Issac so wonderfully complex, it is also far less alienating to new players as a result. Those new to roguelikes or simply seeking a casual experience may take their time beating the game, while veterans of the genre could power through it quickly, especially with the right upgrades. In either case, the experience is polished and the gameplay is addicting. The game's biggest flaw is that it can feel very imbalanced; items like the raven and the fully upgraded sword are notably overpowered, and the final boss is rather anti-climactic. Still, with so many secret items to unlock and a whole colony of rabbits to rescue, Demons Down Under is a wonderful experience that will appeal to just about anyone.

Play Demons Down Under

Does anyone know the name of the game this music came from? I used to play it long ago, and have lost track of it. This game is fun. really reminds me of Zelda.

The orb with higher base damage (grimoire in stash) works pretty well for The Throne level.

Even though I have to manual click because tapping on a laptop does not seem to work on this game it was not too difficult to maneuver. It was harder than I would have liked because of the no tapping issue, but I managed.

Is there a way to return to the surface without dying? I don't see what role the priest has otherwise.

The music was used in games like The Moron Test, Defend Your Nuts, Zombie Situation. Licensed royalty free from Pond5.com and SoundLoopStudio.com.

The potions are a little bit over powered. Pink makes you into a wrecking ball and speed run throughout the map to kill as much a possible. Blue and green are a one room kill. Yellow gives you some weapons. Red gives you plenty of hearts.

The weapons have a nice variety to make the game a bit more interesting.

Tower of the Archmage

> Lori.h— Climb up twenty-five floors, gaining powers, fighting bad guys, and customizing spells to be ready to face off with the evil Archmage who waits at the top. Chose from four different mage classes, gather ruins to build up your spells and try to ward off death in this roguelike rpg.  ...

> Dora— Available in action-RPG or classic turn-based flavour, this moody roguelike from Aaron Steed and music maestro Nathan Gallardo is deliberately mysterious. Descend into a dungeon searching for an amulet with your undead minion, figuring everything from the backstory to the deeper gameplay mechanics as you go. Oh, and tearing off the faces of your enemies and wearing them for bonuses and enchantments. Hooray!  ...

> Kimberly— Choose your hero and embark upon a dungeon crawl in Dungelot. In this roguelike you'll face a myriad of monsters as you fight your way deeper into the dungeon. Collect items to increase your stats as you find the key needed to exit each level. How deep can you delve?  ...

> Dora— Love roguelikes but wish all that permadeath would lighten up a little? This fabulously retro and witty game might just be for you. Venture deep into dungeons and other areas populated by bizarre monsters and strange people as you quest towards one of four different endings and unlock a total of 20 classes. Offering a surprising amount of depth, laughs, and addictiveness, it's a great casual introduction to the roguelike genre, and a lot of fun for fans.  ...