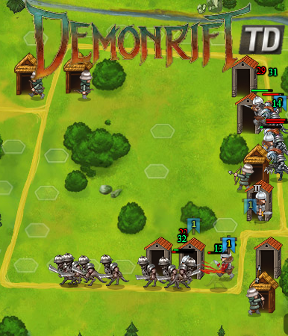 It was the best of times, it was the worst of times... No, actually it's just the worst of times. How else could you describe the situation in Menara Games' turn-based strategy/tower defense mix Demonrift TD? As the Baroness Milena, you command the last of the troops of the kingdom of Emaeron, which has fallen to the forces of a demon horde. Using your mouse to control the various aspects of the game, it is your duty to restore the empire and send the enemy back to whatever depths from which they came.

The turn-based portion of the game is played from the map screen. This is the lighter of the hybrid halves as there's not much strategy involved in it. Once you've recaptured a town (in the tower defense part) you earn one of three different types of resources from that town, the type indicated in the corner of the town's icon. The resources (coin, anvil and crystal) can be spent in the Training Camp to improve and purchase unit types for the tower defense levels. They can also be used to construct a building in your towns, each of which give different benefits to your game in both strategy and tower defense.

Most of your efforts toward glory for Emaeron will be spent in the tower defense levels, which are entered by clicking a town on the map screen with a red flag by it. While there are four total 'towers' to build, the game starts you out with just two: the cheap swordsmen and the archers, which are your only defense against flying creatures. Towers can only be built on the hexagons indicated on the level screen. The thing to figure out is whether it's better to build more towers to attack a greater number of enemies or to upgrade your existing towers to create up to three units (all the defenders from a particular tower attack the same enemy). 'And what are we defending exactly?' you may be asking. Well, you're protecting ancient shrines which provide vital information toward permanently defeating these vile demons. The shrines have a specific defense counter which runs down for each enemy that reaches it. The number of counters left at the end of the level determines your rank for the level, and thus the amount of resources you're rewarded for your win. It's not clear how defending these shrines regains the town for you, but a win's a win, right? 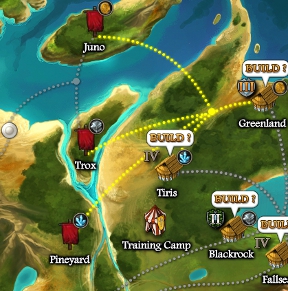 Analysis: The tower defense portion of Demonrift TD lives up to expectations. It's nice to see a tweak to the usual formula. The graphics are nice with a mélange of paint-like backgrounds and cute character sprites. Even the enemies are cute in a demonic, 'I'm going to eat your face' kind of way. Where this game struggles is the imbalance between the two aspects of the game. It posits itself as a mix, but the strategy portion is so light as to be unnecessary to even mention. There are times when your towns can be attacked by the enemy, but you don't see the enemy movements or any other indicator of what they're doing, so it's more of a random event.

It's great to see a developer make the effort to update a game after its release based on player feedback, which Menara Games kindly did on this title. It shows humility and a true desire to create a game people will enjoy. Despite a few issues with the turn-based strategy side of this game, and the fact that the combat is on the easy side for a tower defense, it's definitely a solid play with an interesting story and cast of characters. Will you be able to fight back the demons, and what will become of Emaeron if you do?

Ah, it does me good to see a little turn-based strategy going on. Always been a fan from XCom through the Fallout and Jagged Alliance games. It would be great to see more new games in that vein, seems like it would be easy to put together these days (but then again, I know nothing about making a game).

It's mentioned in the review that the developers made changes after the release, based on user feedback.
Any info available as to what changes were made?
I played through this game before, when it was first released, so would be nice to know if it's worth another play through or if the changes are marginal only.

wow wow wow wow. about 5 hours straight now, this game is good. td is about average to easy, but the story mode and resource gathering make this game 5 'shrooms.

Question: I have noticed that everytime I don't buck up to defend the town, I lose. I thought that perhaps it was based on a rng system, but I have yet to win. I have also lost when I did buck up, but just once.

So I'm curious if anyone has won when they didn't pay to defend the town?

@ Prawn: I copied this from what the developers had posted on Kongregate:

Sub-par TD at best. There are SO many little things they could do here and there to make it better.

All the defenders from a particular tower attack the same enemy, but that does not mean that different towers will attack different enemies. If you have a cluster of towers and get two heavy enemies at the same time, one will take the hits while the other walks right through. User defined tower priorities (e.g. target first, last, strongest...) would make this incredibly better. At the beginning of the tutorial it says that towers close to each other will make a "formation", which helps them attack better. There should be some sort of graphic showing at a glance which towers are in formation with which ones. Speaking of the tutorial, would it be that difficult to add an "end tutorial" button? Or did I just miss that? Because that one seems like a no brainer to me. Kudos to the developer to update it based on feedback, but it feels to me like there is a whole lot more they could have changed.

I thought it was a pretty fun game. There is more grinding than I would like though.

Half the time your cities come under attack. You have to pay a bunch of resources to hopefully not lose.

If you lose, they steal a massive chunk out of 1 of your resource types.

The only way to make resources realistically is to replay the same ole maps over and over.
Furthermore, ALL MAPS are the same value!! So you clearly want to replay the easiest one, where you will win flawlessly for the big reward, vs a more challenging one that you might lose or barely win and get little for it.

Also, avoid the SOLDIER upgrades at all cost as they are a NOOB TRAP. I would actually say the same about the knights. They seem solid, but golems are wayyy better and their speed is actually utterly useless.

So protip is to get the archer upgrades since they are good all game long. Then get to like the 8th town or so, and you can unlock the GOLEMS. Then upgrade them to the MULTI-BLOCK talent and the STOMP, then whatever else.

Also, you CAN NOT DESTROY buildings in towns, so don't mess em up! A tower isnt a terrible start for the 1st town, but after that you want to focus solely on the one that gives more army points at the beginning and gives more army points over time, and finally makes golems cheaper.
Forget about building mines...they just aren't very worthwhile in my opinion.

Final hint: Upgrading is actually BAD. It is not cost effective at all. It is better to spam towers all over the place which will actually do better at stopping the foes and not letting them squeak through.
Try the spam approach instead of the strategic tower placement approach and see how much better you do, sadly...

Quite enjoyable, I think Kingdom Rush does the same concept better but I really like the development of TD games using actual soldiers as a means of crowd control, hope the idea is expanded upon...

There really isn't any turn-based aspect. Every two "actions". You have to hit an "End Turn" button. That's it.

The grammar is pretty bad, though definitely not the worst I've seen. Still, it's disappointing to see yet another good game with poor writing.

Gameplay is decent. It's fun. There is some challenge, though I suspect that a lot of players will feel it's on the easy side. It's missing a lot of TD basics: a next wave button/call, a way to see the stats of an incoming wave, and a way to see the stats of your towers. It could really be improved by some sort of optional challenges (I'm thinking like Kingdom Rush or Gemcraft). Also, more tower types or even just a variety of effects on existing ones.

screen goes black after the tutorial stage. i have reloaded by cache updated my flash. nothing. pls help