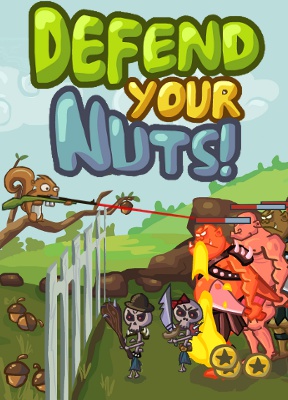 Hey! Orcs, skeletons, giants, mosquitoes, bunnies, and evil bees! Those acorns are mine! Armed with a bow and arrows and a few other more boom-inducing weapons, Elliot Pace's Defend Your Nuts is a fast-paced defense game that puts you in the furry shoes of a squirrel perched on a tree. As evil minions tromp in from the right side of the screen, take aim and fire to send them back to the flames of Hades where they belong, keeping your winter stash safe and secure from their muck-covered paws!

When it comes to shooting armies of undead, you can't go wrong with a bow and arrow. But pointy sticks aren't always the best thing when the bad guys start to get bigger and tougher. Defend Your Nuts employs a coin-based upgrades system that allows you to improve weapons that unlock after you've played through a certain number of days. First, the shotgun becomes available, allowing you a more powerful spread shot to deal with clumps of evils. Next, a precise rifle, and finally, a big ole rocket launcher. Each weapon can be charged to full power by clicking and holding the [left] mouse button, so charge up, take aim, and clear out some bad guys.

Headshots deal more damage than body blows, so go for their noggins to deal maximum damage. Keep an eye out for coins and ammunition icons that drop from defeated enemies. You can collect them by swiping the cursor over top, and you'll need every extra shot and every coin you can get. You can also buy and upgrade land mines and a protective fence to keep your acorns safe for as long as possible!

Analysis: Mmm, artillery plus squirrels plus zombie skeletons! You can't go wrong with a starting formula like that, and Defend Your Nuts does indeed hit all the right marks in its design. Good visuals, a simple but nice upgrades system, intuitive progression and selectable difficulty levels make it easy to get into, and everything culminates in a final battle that's perfectly suited for a defense game.

Defend Your Nuts can drag a little bit around the dozen-day mark, a point when you've managed to upgrade a few weapons to give you a big advantage over the baddies and you can pretty much coast for a few levels, racking up coins to upgrade the rest of your inventory. You'll need things as maxed out as possible, too, as a few days later, you'll meet the game's final boss. Eeep!

If you need practice defending your stash of acorns and all you've got is a bazooka, consider Defend Your Nuts the finest browser-based training routine you can adopt!

It was pretty easy with an upgraded bow and arrows as a spammed artillery, and switching to other weapons when needed.

I might attempt to do it on hard mode but I'm not really motivated on repeating what I just did.

The "Normal Mode" in this game seems a lot like the easy mode in many others. I was expecting more of a challenge, and I was hoping for more levels. It's cute though. Considering the minimum threshold for even getting onto JIG in the first place, I'd have to give it two mushrooms.