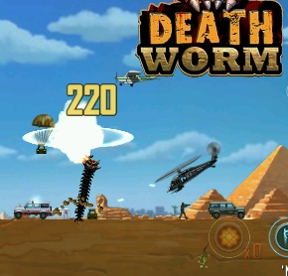 The say size isn't everything, but that only applies if you aren't a massive, carnivorous, desert-dwelling hell-worm that needs a steady diet of camels, civilians, ambulances, and jaguars to survive. Oh... sorry, did I say hell-worm? I meant to say Death Worm! Play Creek's surprise hit 2007 indie download gnaws its way into your browser with 15 levels, 30 different enemies, achievements, and a whole lotta explosions. And we wouldn't have it any other way.

Turns out steering a Death Worm is only slightly more complicated than riding a bike; use the [arrow] keys to maneuver and build up momentum, popping up out of the ground to snatch your unwary prey, and burrow down deep within the earth to reach even higher when you burst out next. While your foes start off small-time the ante is quickly upped as everything from tigers to soldiers to helicopters and detonators roll out to put an end to your feasting. Which would be discouraging if not for the fact that you're a Death Worm, and can upgrade your abilities between levels and even gather power ups to let you put on a burst of speed or spit freakin' fireballs. (Still not as freaky as Goblin Sharks, though.) To pass each stage you'll need to meet the requirements, usually "eat some dudes" and "eat even more dudes".

Once you've mastered the controls, you're golden. Death Worm isn't actually that difficult, apart from a few frustrating levels where you're required to devour a certain amount of enemies without taking damage (and the count resets if you do). It's actually fairly easy to coast along beneath the surface and peek just the top of your head up to snack on some poor sap, then duck back down before anyone else can react. Of course, that's if yer yella. Death Worm's real entertainment shines when you rocket out of the ground and rack up big combos for higher scores, sending limbs flying and causing helicopters to careen out of control into a pack of terrified tigers. Compared to its original release, Death Worm has undergone a significant visual upgrade, but still retains that fast-paced monster worm action that captured the hearts of men and women everywhere. Sometimes you want complex strategy or a deeply moving story that changes your personal outlook; Death Worm has neither, but it does have the ability to swallow you whole, so maybe you shouldn't tell it that. For awesome arcade action, Death Worm satisfies.

Didn't Nitrome release a game like this a while ago?

Not only Nitrome I think there are two others or more, but there are differences.

Okay, I can barely play this game on my laptop! There is way too much lag. Nothing against the developers, it's just that my laptop is cheap. I'll try this again on the desktop, but it would be nice for there to be a graphics quality setting (unless there already is one, via right clicking).

This game is the diggity! I love the upgrades, so addictive. luv luv luv it

Happened to complete this just now on a first attempt. It was fun for about 10 levels, then 'meh' until the end (which came early - I would have liked to keep upgrading the Death Worm).

* The worm was a little fiddly to control, though I suppose that's the point of the game so I shouldn't complain.
* I have to squint to see some of the enemies - do they have to be so small?
* Power-ups were not exactly plentiful which really discouraged me from using them, in case I needed to hoard fireballs to beat a difficult level.
* Sometimes you don't eat/destroy a target directly, but 'cause' it to be destroyed by an explosion or falling enemy. Often I found that the latter doesn't get counted as your kills, unless it's part of a chain/combo recognised by the game. Bizarre.

Much better on the desktop and... this game is awesome!!... and tough. And the "one or the other" upgrade system really adds to the challenge. Thanks for this recommendation, JiG!

I clicked and gave it a drive. The first thing I noticed was the absolutely adolescent graphics and sound. And then TIGERS? Walking the streets in Egypt? Wha...? Sloppy, cheap, almost insulting, said I. Of course after about FOUR HOURS OF INTERRUPTED PLAY, I was ready to give it a chance. :D

Level 15 is HARD.
I keep dying instead of running out of time. And I've been going for the health (length) and defense (skin) boosts whenever possible. Stupid UFOs.

The power-ups don't work properly at all - though I killed three lizards for a powerup like the instructions said, "eating" a power-up didn't get me any fireballs or nitros. I'd have to collect three of those (total NINE lizards) to get ONE powerup. Fail.

Also, when I upgraded my fireballs, I was given the option of +1 fireballs per powerup. Unfortunately, I gained only the normal four fireballs per three powerups. I could have used those upgrades for something else.

This looks an awful lot like the arcade version of Silkworm by Tecmo, from 1988. Coincidence? It was pretty rad and the graphics/sound were great for the time.

I got to level 12 or so before I finally died for the first time, and figured I should do something else with my time. Kinda fun while it lasted, though.