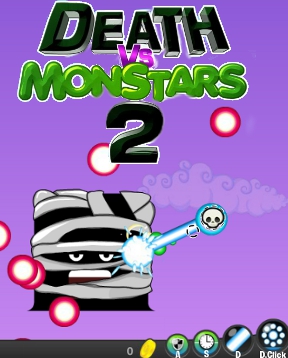 GameReclaim's bullet-filled arcade shooter makes a comeback in the chaotic, addictive Death vs. Monsters 2, where you play a skull with a passion for shooting things a lot while they try to shoot you. Hey, I ain't judging. Everyone needs a hobby. Some people juggle geese. The game controls almost entirely with the mouse, which is used for movement, and you'll automatically fire in the opposite direction you're moving... which takes some getting used to, so you can also hold down the left mouse button to lock your fire in the current direction. Baddies will appear all over the screen in waves, and your job is to take 'em out and survive 'til the end. Avoid enemies and bullets, but nab coins whenever possible, since you'll need them to spend on upgrades and new abilities at the shop between levels. If you feel up to it, the Challenge Levels also provide a creative but brutal addition by forcing you to meet specific requirements on those stages with only specific equipment, or without getting hit.

It's rare to find a sequel that makes the original game look like a prototype, but Death vs. Monstars 2 manages to do just that by being much more polished and piling on the challenge. The new abilities like the laser, bullet time, and shield add a new layer of strategy, since you really need to master their use to progress, and as a result, despite its chaotic appearance, the game actually punishes mindless, erratic play by killing you over and over. Certain upgrades that would be helpful are still missing, like a coin magnet, and a box of tissues for you to cry into when you come this close to beating the boss over and over, but on the whole, this is a fantastic and smartly designed arcade experience for the bullet enthusiast in your family.

playing in firefox, and levels keep hanging up. They'll just stop progressing and I have to pause and exit to the campaign menu and restart the level.

This is great, everything about it is great.

Hi neo1973! I played the game in FireFox as well and had no problems whatsoever. Have you made sure you're upgraded to the latest version of flash?

This game needs a coin magnet...

I only got to play for a few minutes, but I also had the problem that neo1973 had. I had paused the game for about five minutes, came back, and after the current wave was completed, no more creatures spawned. I played on Chrome. It's only happened once, though, and I haven't paused the game since.

ok, I haven't had the glitch in a while, HOWEVER... I have a serious gripe.

I just played the 2nd boss about 30 times to finally beat him, and then I get zapped out of the stage before I even get a chance to collect the loot!! I got maybe 2 gems. What a bummer!

I can't believe this game doesn't have any sort of upgrade for attracting cash. I spend all my time avoiding enemies, so picking up money is super slow, and makes the game not as good as it could be.

When a game gives you no coins for almost finishing a level, it is basically telling you to grind the easier levels for cash. This is either high stakes or no fun, depending upon how you look at it.

Wait... maybe you do get points for trying.

The level hang issue happened to me as well. I was just playing the second level when enemies stopped spawning with the counter saying 2 Waves Left.

The odd manner of aiming in this game is horrible. And the lack of a "coin magnet" is kind of annoying. If the game didn't have a somewhat charming style I'd give it a 1/5. Since I can't pick a half-shroom I'm rounding my 2.5 rating down.

I'm also using Firefox, and I didn't experience any issues.

This game was really easy. All I did was

buy level 1 of every upgrade, buy the first weapon, buy the gentleman outfit to double my money, and I farmed level 3 until I could buy the final weapon.

By the second boss, I had bought everything. The whole game took maybe an hour to beat including the challenge levels.

Also, the level 7 challenge level can be more easily beaten by

wearing the medieval helmet. It allows you to take multiple hits.

Scrolling around with the mouse and clicking, went just outside the box I suppose and clicked a link. Oh, mouse control, what a horrible design decision for an action game you are.

@Ten - was a frustration for me too, as it is with most mouse/ action games. when you have to move all over the screen, you will eventually mouse outside of the screen, leaving your avatar as a sitting duck in the game play field. If you are also clicking, chances are you just clicked a link as well, and made your gaming experience a real mess.

fun game. got stuck on level though when no more waves came (similar problems to others - using firefox). had to refresh then lost all progress :( a save feature would be nice.

I agree a coin magnet would be great. Also I really don't like the mouse when it leave the game screen. Since the game has no pointer to follow death resets to 0,0(the top left corner), by going directly to that point. It will hit anything while it goes there. A very annoying flaw when you need to loop around the walls to avoid enemies.

The level hang thing happened to me right away after the first level. Grrrr!

New version uploaded: Fixed bugs mentioned in the comments above.

Considering that I spent hours on the other bosses the final boss was way to easy, he is a lot easier than the second to last boss.