The iOS platform has needed a really good original adventure game for a while now rather than just subsisting on a meager diet of ports of preexisting titles. Has Phosphor Games swung to our rescue? After all, dropping you in a hospital crawling with unspeakable horrors and an unstable narrator is how game developers say "I like you", right? The Dark Meadow is an action adventure point-and-click-ish type game with horror elements. As mentioned, you find yourself in a decaying hospital where only one person doesn't seem to be trying to kill you, and he isn't much help. Finn, as he's called, babbles about a witch trapping you both there... and you are well and truly trapped since not even dying will set you free. Find out the truth about the walls you're trapped within, the bleak meadow you can glimpse outside, and the horrible things men do for power. 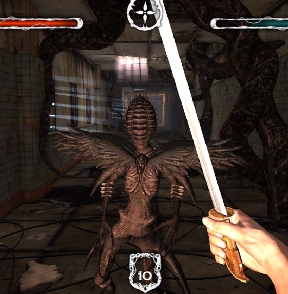 The Dark Meadow isn't a free-roaming adventure game; you can only move to places the game will let you, a sort of "on rails with options" experience. Navigation is easy; just click on the glowing green circles to move, and on any containers to open them or items, mainly sacks of gold, to pick them up. Gold is important since you'll need it to buy new equipment to increase your health and stats, but don't forget to grab first aid kits, which you can only use outside of battle, and gems; find ten of them and get ten attribute points to disperse as you see fit. Almost more important than gems and equipment, however, are books and bits of paper lying around that will gradually fill you in on the story; there are almost sixty to find, and since Finn's reliability seems... questionable... you might want to hunt them down whenever possible for your own answers.

When a monster appears, usually randomly, you'll shift into combat mode whereupon you can drag your weapon of choice (and by this I mean your finger) around the screen to slash and shoot as you see fit. When enemies are at a distance you can peg them with crossbow bolts, but once they get close enough you'll shift to melee. It's actually a pared down Infinity Blade; you use the arrows on either side of the screen to dodge enemy attacks, and swipe at the screen to slash them when you have an opening. Just remember; dodge towards the arm the big baddie is using to take a swipe at you, and wait to strike until you get the "Attack Now!" message. There are even special combos to use if you find the clues for them. Gain enough experience to level up and you'll get points you can spend in several attributes. If you do die (or take a break from playing), however, it's not the end of the world; you'll just reawaken allllllll the way back in the starting room with all your equipment and levels, and at least you'll find more gold and items randomly dispersed throughout the whole building again when you do. You can also buy large amounts of gold via an in-app purchase if you so desire, but that's entirely optional. 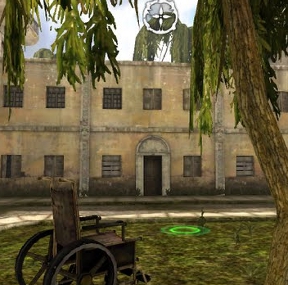 Analysis: The Dark Meadow is powered by the Unreal Engine, and it's clear that the game takes advantage of this. It both looks and sounds great, apart from some slightly muddy textures on iPad Uno, and by and large is very responsive during gameplay. While it really is more of an an action game than anything else, there's a fairly strong emphasis on story as well, and having the notes and papers randomly dispersed throughout the game provides great incentive to explore. Finn's increasingly inane ramblings, threats, insults, and praise can sometimes be goofy enough that they almost feel like they don't fit the setting, but the voice acting and writing is actually very well done and he never repeats himself.

The downside, however, is that Dark Meadow just isn't very scary. It's dark at times throughout the course of its narrative, sure, but that's not the same thing. Nothing jumps out at you, nothing goes bump in the night. The biggest culprit is actually the combat which, while easy, is also more than a little repetitive and honestly just feels like its dragging out the gameplay by making you grind for levels and cash to get past certain encounters. It also really hamstrings the whole atmosphere the game seems to be trying so hard to achieve, making it less creepy adventure and more hacky-slashy-ready-notey. Maybe if death carried a harsher penalty... although making you drag your sorry butt all the way back through each area whenever you get knocked out is admittedly a pretty gross punishment as it stands. Can't you just, like... slap us around a little?

Despite this, The Dark Meadow has a lot going for it. The simplified Infinity Blade combat is easy to get the hang of, the monster designs are varied enough that it helps to take the sting out of how often you'll get in slap fights with them, and the story is actually very well told. Fans of the oppressive horror in, say, Amnesia may be disappointed in the frequent combat and the grinding, and it really feels as if the game might have benefited more from more varied gameplay, but if you go into this knowing what to expect and even anticipating it, then The Dark Meadow has a lot to offer you. It's well written, beautifully visualized, and Phosphor Games clearly has a lot of talent and a lot of potential hits in their future.

The fountain in the courtyard will help keep you from having to trudge up all the flights of stairs. Click on it.

You can earn sun coins and such by completing tasks outside the game.