Dark Fall: The Journal is a creepy first-person point-and-click adventure game originally released independently in 2002, and then re-released globally by the Adventure Company a year later. In this classic digitized ghost story, everything begins with a panicked phone call in the middle of the night... 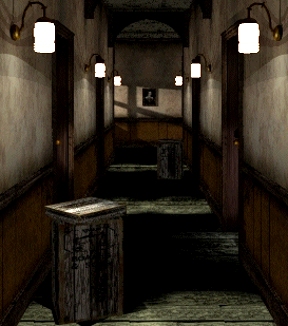 Pete, your brother, has gained quite a reputation for himself as an architect, and he has chosen The Station as his next big project. Once a quaint hotel in the English countryside, The Station is unique in that it is built quite literally over the train tracks of a now defunct train station. Back in the early twentieth century both station and hotel bustled with activity and even served as something of a social hub for the locals. But then six people disappeared from there never to be heard from again. The Station never recovered from that, and it seemed it would be closed forever. Until your brother came along with his hopes of resurrecting the old abandoned hotel as a night club.

This is the business that brought Pete out to The Station in the first place where he ran into Polly and Nigel, two college students turned amateur ghost hunters. But by the time you arrive to the abandoned hotel, neither your brother nor his two new friends are anywhere to be seen. Like those six people from six decades ago, Pete, Polly and Nigel seem to have disappeared without a trace. Instead, as you walk through the shadow-laden train tunnels to The Station, you are greeted by the disembodied voice of a young boy, yet another victim of the hotel's dark secrets. As he guides you to the hotel, he explains that it is up to you to help not just your brother, but everyone else who has fallen prey to whatever it is that stalks the halls of the hotel.

Compared to modern point-and-click adventures of this type, Dark Fall is positively streamlined with a very simple interface. The cursor automatically changes to indicate if you can move to a certain place, use an item, perform an action, or investigate closer. Your inventory will remain at the top of the screen, and all you need to do is click on an item in your inventory when you are on a screen that requires the usage of an inventory item. There are no independent inventory or status screens to navigate. Of particular note is that the game also does not keep track of any dialogue or documents you come across along the way, and given the sheer volume of information available here, it is highly recommended that you start up a journal of your own as you play. Also of note is that your game is saved as a notepad file and you will be asked where you want the game to be saved. As a result it's also recommended that you create an independent save folder so you don't have to go hunting when you want to load your game later. 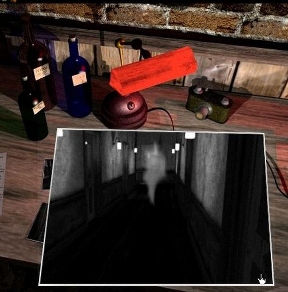 As you explore The Station, not only will you piece together what happened to your brother and the two college students, but you will also meet the six missing persons of yesteryear as well. You'll uncover the stories of a failed actress and a bank robber, an overworked young woman secreting her boyfriend away under her mother's nose, and an odd pair of friends whose own explorations have uncovered something great and terrible somewhere in the bowels of The Station. Can you unlock the mysteries of this once thriving hotel? More importantly, can you lock its darkest secrets back up before it's too late?

Analysis: Dark Fall: The Journal offers up a deliciously eerie adventure experience that is chock full of atmosphere and immersion. Despite some fairly obvious flaws, this story-driven spine-tingler tells a hauntingly good ghost tale that raises goose bumps without resorting to buckets of gore or cheap jump scares. Instead, mood, excellent story choreography, immersion, pitch perfect puzzles, and a subtle approach to spinning fear weave together to form this wonderfully creepy ghost hunt.

Dark Fall started life not as a computer game but as short story penned by creator Jonathan Boakes. He then built the computer game based on the story to be shared with friends and family until it was published by The Adventure Company. That The Journal had such a literary infancy may explain one of Dark Fall's greatest strengths; it's just amazingly well written and choreographed. Granted, the story is told almost completely using the old video game trope of discovering documents lying around, but while this style of story telling may be tired elsewhere, it works magnificently here. It is this aspect of the game that gives it so much depth and dimension as we are slowly and gradually introduced to the surprisingly complex tales of a rather diverse cast. In this way, the main story is a ghost story, but it is also a composite of all these other stories braided together. Each individual thread draws you in and ultimately strengthens your attachment to the main plot.

Providing nearly as large an impact on the gameplay is the extremely bare bones approach to adventuring on display here. There's no separate inventory or status screen, no cursors to manually cycle through, and most importantly no automated method of keeping track of the scores upon scores of documents, letters, narratives, journals, etc., that you will come across. This will force most who play Dark Fall to keep their own journal which might seem at first to be a decided negative, but I can say with confidence that being forced to take my own exhaustive notes throughout the game added immensely to the experience. Indeed, I credit this aspect of the game for making this the most fun I've had playing an adventure game in a very long time because I not only felt more invested than I usually do with these kinds of games, but I felt more a part of the entire process. Couple that with the fact that the inventory is on screen meaning that you never navigate away from the main playing screen and you have a game that doesn't let you walk away and hide in some options menu or status screen somewhere. 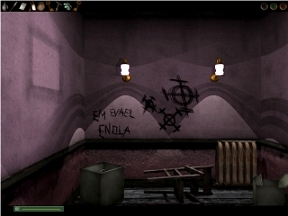 There are plenty of other goodies waiting inside the haunted halls of The Station. You won't be collecting a great deal of items like in many other adventure games. This is because while many adventure games rely upon finding items and figuring out where they go to supply many if not most of the puzzles, Dark Fall offers up a host of excellent and original pen and paper style puzzles that are challenging, but not so much that you'll be running for a walkthrough. Also, Dark Fall is significantly non-linear and gives you an amazingly large amount of area to explore right from the beginning. Instead of having to solve three puzzles just to get out of the first room, you have free reign over about sixty percent of the game world from the beginning (and trust me, it will still take you a while to explore that much). Finally, the audio and subtle special effects come together to create an astoundingly eerie experience. Doors that open by themselves, whispers that creep through the hallways, and silhouettes that appear for only a fraction of a second only to disappear after you blink may not leave you soiling your undergarments, exactly, but will keep you most definitely on edge.

Dark Fall's largest weakness, perhaps, is its graphics. Actually, I would say that Dark Fall has a similar visual look as the original Myst which wouldn't be so bad except for the fact that Myst is about ten years older. In fact, one could argue that Dark Fall has a lot of similarities to Myst, some good. Unfortunately, the visual similarities aren't. Actually, the graphics aren't absolutely terrible, but there are more than a few instances where they are clearly not where they could or should be (I cringed every time I saw hair brush bristles represented as a single solid mottled object). Along with the poor visuals comes the sometimes frustrating navigation. As is common of many games of this type, all the available exits in any given place are not always clearly marked. Not being able to reach vital parts of the game due to poorly mapped hotspots and a tetchy navigation system can definitely lead to undue frustration. Indeed, the entire interface, though simple, can feel somewhat clunky and unforgiving until you have gotten used to it.

Ultimately, the choice of playing Dark Fall rests on everything above as well as what kind of scare you enjoy. If you like slasher flick gore, or carnival haunted house jump scares, Dark Fall doesn't have a whole lot to offer you. If you like a good ghost hunt, though, you're definitely in the right neighborhood. It's true that this game can be rough around the edges, and I won't deny that. Nor will I deny that taking your own notes can sometimes seem like a lot of work, but in the end, all that work is most definitely worth it. No the ending is nothing to really write home about, but that doesn't matter either because in Dark Fall: The Journal, it's the journey that is everything, and as journeys go, it's one bumpy, scary ride.

Oh, wow. I remember playing this when it came out. It was very fun indeed!

I personally blame The Adventure Company for much of the reason why the adventure game market is what it is. Basically, IMO they flooded with low-quality games.

That said, this one wasn't too bad.

Hey guys, looks like you forgot an 'affiliate' tag there. :-)

Also, a game that makes players take extensive notes outside the game is not the first thing that comes to my mind when I think 'casual'.

I bought this years ago and had to borrow a friend's PC to play it (I'm another Mac zombie.) It was spooky as all get-out and I loved it! I was psyched to see it here and thought it was online-- until I saw the 'Download (Windows)' tag. So sad...