With the success of music games on every platform, it was inevitable that iOS devices would see a few as well. While the range in quality is as variable as ever, Cytus from Rayark is on the high end of the scale. With clear, fantasy-futuristic graphics the game catches attention from the title screen simply by looking different, and gameplay doesn't disappoint either!

Similar to other rhythm games in basic design, the idea is to hit notes in time with the beat of the track. In this case, a bar moves vertically on the screen, and as it passes over glowing markers, you need to tap, hold, or drag them, according to their icon. The full width and height of the screen is used for this, giving you more to do than just staying in time, and on the harder difficulty, your screen will be full of markers needing attention. 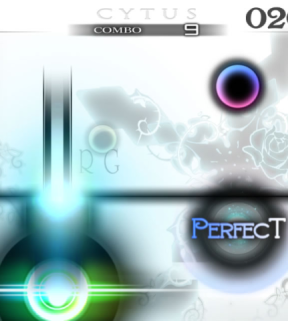 This can feel a little ambitious on the iPad versus the smaller-screened iPhone or iPod Touch. At times the size of the screen left me feeling like I needed comically huge hands to reach all the buttons, and the optimal way to play, with the iPad flat and both hands used above it, is probably the least comfortable. That said, it's not impossible to play more comfortably with practice, and there's always easy mode if you need to relax a little. The choice of music is also debatable, with a distinctively J-pop theme. Fans may recognize a few of the artists, including Miku, but it's not a well known genre outside the Far East. Extra music packs are being added for free every 10,000 sales of the game, which is a great idea by the developers, so hopefully the variety will improve as more content is included.

Regardless of a little hiccup here or there, Cytus is a great game, visually appealing and inherently playable. The board shimmers and shines as you play, light rippling across it with every beat. It's responsive, and the tracks are generally well synced, each one having two difficulty modes to keep the replay value high. Included in the asking price are 30 tracks, with up to seventy more on the way should sales keep pace. If you're a fan of J-pop, or can at least tolerate the synthesized vocals and light dance style of music, Cytus is highly recommende!

NOTE: This game was played and reviewed on an iPad 3. Game was available in the North American market at the time of publication, but may not be available in other territories. Please see individual app market pages for purchasing info.