It's been three years since the first Cut the Rope game, but our little green buddy is still hungry! When a time machine so rudely nabs his next snack, Om Nom jumps in and chases after it. But really, can you blame him? Cut the Rope: Time Travel follows the well-established formula from the previous games, adding themed levels that take us through the history of the human race one era at a time. 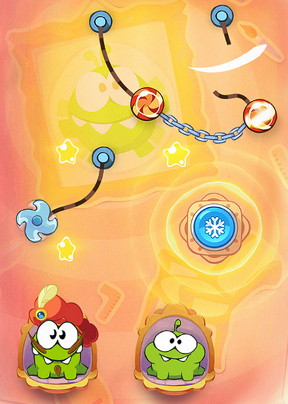 Here's our super-exclusive special protip for playing Cut the Rope: Time Travel: use your finger to cut the rope! Get the candy to Om Nom and his hungry ancestor at the bottom of the screen by slicing supports and timing your moves so the candy falls right into their mouths. Just about everything can be touched, poked, pushed and prodded, making each level a puzzle waiting to be solved. Depending on which era you're in you'll have different sorts of obstacles to deal with. In the Middle Ages, for example, you'll need to release blades to slice through chains, and on the Pirate Ship, keep an eye out for mines!

Developer ZeptoLab is in a great position with the Cut the Rope franchise. New releases don't have to reinvent the series in order to entertain, they just have to live up to the high standards set by the original. Cut the Rope: Time Travel definitely does that, providing the same responsive, realistic physics and cartoon-like graphics that never cease to entertain. The time travel mechanic is a great excuse to add themed level packs, and with two Om Noms to feed, things can get a little more complicated in later stages. There are nearly 100 levels to work your way through, which is probably all the excuse you needed to start up your rope cutting addition again!

Gosh darn it, don't these people have enough of my money already?