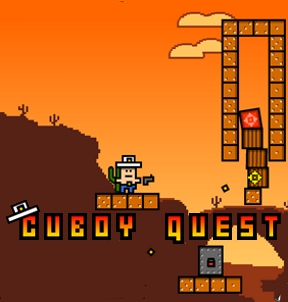 While there is no mistaking who Cuboy might be, given the angular features of the main protagonist in this puzzle/platform game, it is not entirely clear what his quest is. Not that it matters - if you can spare thirty minutes or he'll jump around and shoot at targets. But if you care how many bullets it takes, you'll spend a bit more time with Cuboy Quest from Rigolab.

There is no lack of phuzzle (physics puzzle) games on the web, but they come in an amazing variety, from destroying castles to bouncing an object down a ramp before the time runs out. Cuboy Quest adds another twist to the genre, blending platform, physics and shooting. You are a stetson-donned, pistol-armed fellow called Cuboy and you have to navigate thirty levels by shooting targets, which in turn opens up the exit to the level. This often involves shooting the targets while they move and sometimes requires things to be shifted in place. While moving with the [WASD] keys and shooting with the mouse, Cuboy has to jump platforms and hit the targets in certain sequences to unlock the exit.

But unlike many phuzzle games, Cuboy doesn't challenge you by limiting shots. Instead, much in the tradition of games in the One Button genre, you tally up shots. The real challenge is to use as few bullets as possible. This makes the game pretty easy and why you will breeze through it the first time. It really only demands some rudimentary puzzle-solving and reflex skills. But if you want to see if you are really good, reduce the number of shots it takes to finish the game.

The controls are very tight and responsive and graphically Cuboy Quest is nice looking. It has a low difficulty curve, but that is obviously not the point. If one aspect had to be picked, it's that it makes very little fanfair at the end around the number of shots you expended during the game. And unlike games that tally up a number of actions, the levels aren't seamless. Much like a regular puzzle game you progress from challenge to challenge. This duality might put some off Cuboy Quest, but it honestly is a nice idea that has been executed well. Perhaps not everyone's cup of tea, but that's because not everyone likes tea.

Viva caffè! This is not my cup of tea.

I'm a little disappointed mainly because I loved the other Cuboy games so much that my expectations soared too high for this. There was nothing at all wrong with this game, it just... was.

@Dandy - This is not the same Cuboy from Edible Castle's Back the Cubeature and other animations/games. This is a different Cuboy flash game with the same name.

"The controls are very tight and responsive..."

I was thinking the exact opposite. I felt like the character had too much momentum; slow to start moving and hard to control once he was, especially in levels that require precise jumps.

Wasn't this exact game featured earlier? I remember all the levels...

I agree with Neddo, at times the controls felt *very* clunky in a sense... :(

I also agree about the controls. And I've got to say, I was a bit disappointed to realize that it wasn't the same Cuboy, despite the Wild West theme. Some humor would have gone a long way to ameliorate my frustration with the unstoppable momentum carrying apparently-faux-Cuboy past the edge of the platform once again.

I also found the controls to be painfully annoying because of the ridiculous momentum. That even made levels that looked pretty easy and normally would be really hard for no reason.

I guess the first line of the review is a bit redundant seeing as I mistook this Cuboy for the other Cuboy. *Facepalm*

Cleared all boards in 45 shots! Can anyone do better?

"The controls are very tight and responsive..."

I too agree with neddo, I liked the game, but found jumping to be very frustrating.

Controls NOT tight and responsive. Cuboy slides around like a duck on ice. Also: Trackpad adds a significant level of difficulty on this one.

4,815 Views
6 Comments
chrpa— Jayisgames needs your help to continue providing quality content. Click for details The latest escape game by Rinnogogo arrived! The magical land you are supposed to escape, hides many secrets and some stay unexplained...maybe you are trying to leave...  ...