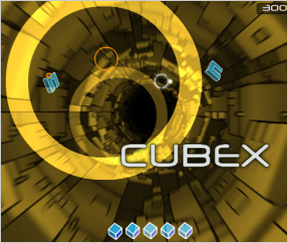 One part shooter, one part visual/audio toy, Cubex by RoboJAM is a stunning Flash game reminiscent of the Dreamcast/PS2 musical shooter Rez. The first person view sends you flying through a futuristic corridor defending yourself against polygonal enemies that appear in the distance. With the mouse, simply move the target around the screen and pelt your foes with weapons fire. The throbbing techno beat in the background keeps things running right along, and each time you fire and destroy an enemy you add to the music.

Between levels where the only goal is to destroy everything you see, Cubex adds a little brain twist action to keep you alert. Instead of randomly destroying enemies, the game asks you to shoot the shape that doesn't match, throwing a handful of similar foes at you and forcing you to decide and fire within a few seconds. These require split-second decision making but add a nice pseudo-puzzle touch to an otherwise reflex-based game.

Where Cubex really shines is the audio and visual presentation. You couldn't ask for more svelte graphics, though after a few levels they feel a tad repetitive. The techno backbeat is excellent, and the subtle interaction between your playing and the game's music helps draw you in.

Analysis: Cubex is a simple game with widely varying difficulty levels. Sometimes it's easy, and the rest of the time it's extremely difficult. Hit detection in Cubex is a bit ambiguous, and I was never quite sure when and where I would take damage. Enemies turn red when they're about to hurt you, but by that time it's too late to defend yourself. In the end, the best strategy I could come up with was to keep covering the screen with weapons fire between targeting stray foes. Odds are I'd come out on top.

I find this game incredibly difficult. For one, it's hard to tell how close the objects are to hitting you (if this is indeed what they do), because they just kind of fly out to the periphery, hang there for a while, and then turn red. Once the objects start avoiding my shots (level 4, I think), I'm pretty much toast. I can hit the ones near the edges of the screen, but the ones in the middle--I've tried leading them, firing a spread of shots... nothing seems to work.

So, while the game looks nice, I didn't find it too much fun. I think my complete inability to judge the depth of the objects is what killed it for me.

I'm a bit puzzled by how I managed to get 103% accuracy for stage one.

I agree with Suho- although the graphics are pretty, the gameplay suffers from the lack of clarity when shooting. It's difficult to tell when your own missiles will hit, and I couldn't tell at all when enemies were getting close until it was too late.

And I got %136 accuracy after stage one? Whaaaat?

You can score greater than 100% accuracy by hitting more than a single target with one shot. :)

And I found it easier to just play the game by allowing myself to become immersed within the movement through the tunnel. When aiming in this way, you will want to aim 'ahead' of the target's path since your shot will take a bit to arrive at that point, and the target will have moved.

Of course that changes with the "hit the one that's different" level, but I enjoyed those as well because they made me think differently, too.

thanks for the review and comments, I've been working on the game for about 2 months so I kind of lost objectivity in terms of difficulty. Its not quite the game I wanted to make in terms of game play. Hopefully i'll get time to make a sequel taking on board all the feedback from this version.