When you hear the phrase "the best things come in small packages", you should mentally amend that to "the best things come in small cube packages". Cubemen is a no-bloat tower defense game that tries to do one thing and do that one thing well: strategy. Forget mini-games, artificially inflated campaigns, and storylines that make about as much sense as a koala flight attendant. Cubemen delivers pure, raw tower defense strategy, and it does it so well, you'll lose yourself each time you play. 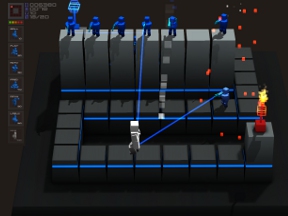 Cubemen is a smart blend between tower defense and real-time strategy genres, losing stationary buildings in favor of mobile units that must fight their way to their destination. In defense mode, the game's classic tower defense set-up, you choose between half a dozen deployable troops, ranging from basic units to rocket launcher-toting warriors, strategic ice-bearing soldiers, and even a medic. Where you put units and what type you use is the central focus of the game, and as you defend yourself against wave upon wave of enemy creeps, you'll have to adjust and re-deploy as needed.

In defense mode, units can be placed anywhere on the map, even on high terrain squares that make attacking (and being attacked) difficult. In skirmish mode, Cubemen's real-time strategy-style experience, it's a different sort of story. Here, both teams send out waves of creeps that slowly work their way to the other team's base. You deploy the same units but are limited in where you can place them. Money (in the form of cubes, naturally) is also limited, so you have to be very picky about what you deploy, where you deploy it, and when you do so. 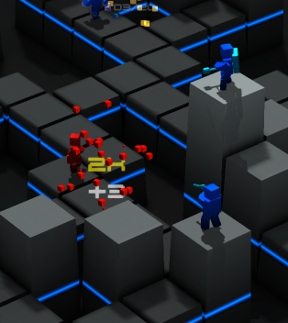 Analysis: No upgrades, no spells, no special abilities, no power-ups, no garbage. And that's so nice! Cubemen is a much better game because it eschews those frivolities in favor of a basic, strategy-centric set-up. It's such a blissfully simple experience you'll get completely carried away by the tactics of it all, even if you're a casual gamer who only has half a mind for these sorts of games.

The two main modes of play offer some sub-modes as well. Multiplayer is available for skirmish mode, and you can both join and create your own games. Defense mode has half a dozen sub-modes ranging from classic TD to rockets only, limited funds, and endless, all of which take place across almost 50 different maps. It's a lot of variety for a game that sticks so closely to one or two simple gameplay directions!

Cubemen is a great strategy/tower defense game that will be enjoyable for anyone to play. It's a budget title in price only, as you'll easily get dozens of hours of enjoyment out of it simply because there's so much to learn. It looks great, sounds great, is simple to play and fun to master.

Mac OS X:
Get the full version (via Steam)