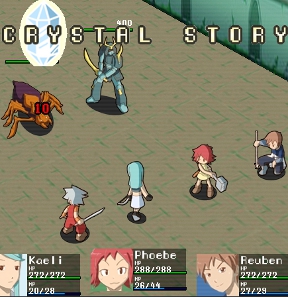 Oh man, it's the start of another week, and you're chained back to your obligations instead of running around enjoying yourself. Guess there's nothing left to do but suck it up, right? Wrong! Why give up when there's still salvation in the form of the solid, entertaining Crystal Story, an RPG by Emmanuel Salva Cruz? Play as the lovable cast of Mercenary, Inc. as they do their best to defeat the evil witch, Rita, down the depths of the Evil Cave. They don't do this for the glory but for the money (they are mercenaries after all) provided by the gallant yet lazy Hiro the hero. Gotta love a pun!

The controls of Crystal Story should be familiar to regular players of RPGs. Use your mouse to navigate the various menus, and while in dungeon mode, which is an overhead view of the party, click the mouse over the area where you'd like them to go. This could involve running into an enemy to enter the combat screen, hitting a treasure chest to collect its contents or entering an opening in the wall to go to the next area of the level. Combat is one of the few times there are keyboard shortcuts available, [1] - [4] represents the different actions available to your characters, though you still have to click the target of your actions to execute them. At most times, [ESC] can be used to access the main menu. Hey, the fewer keyboard shortcuts, the less likely you are to play the game two-handed, great for when you're feeling lazy. But don't be too lazy about exploring the levels. They're randomly generated, and the only way to save a particular layout is to completely explore it. Great for when you need to go back to a level or load a game after a gaming break for that thing people call 'sleep'.

While dungeon crawling, you'll encounter warp points which can transport you back to the town where you can restore your stats in the inn, sell your loot at the aptly named shop and take on sidequests at the tavern. The sidequests take several forms from the match-3 zombie defense mini-game to the tamagotchi style pet slime that will spew a treasure once it's feed meter is filled. Eat up these bones, little slimey. Mama needs a new Wind Slasher! Also at the tavern is a Wanted List with most of the mini bosses listed. That's right, when you've defeated each of the ten underlings (not mandatory as combat can mostly be evaded when you want) you get a cash prize and complimentary equipment. Yay! 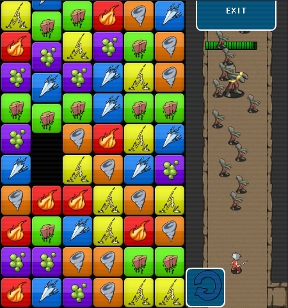 Analysis: As with all RPGs, the combat plays a big role and being able to pick what class of magic each character can put their ability points into is a nice way of stepping back from the restrictions of picking a specific class that's usually encountered. On the other hand, not having your characters have a specialization can cause some combat confusion. Attack with melee, attack with magic? It's up in the air, because they're balanced and neither is stronger in a given character. The back and forth between the town and dungeon occupies most of the gameplay, but the well balanced combat doesn't drone on as every few levels you'll get a funny cut scene to keep you motivated to continue descending. The sidequests keep it fun too; you can't help but laugh at Reuben's efforts to woo Miss Bubbles.

There is a minor bug when healing your party in the skill or inventory submenu as the changes are not reflected in the main menu stats (though they do still occur). Crystal Story isn't innovative, but it is a good RPG. It has anime style graphics that fit right in with the humor, epic music by Morgan King that will take you back to when you played Final Fantasy (the number depending on your age) and a storyline to put a smile on your face. It's a lazy few hours of gaming that await you, so put on some comfy clothes and grab a bag of snacks. You'll be glad you did.

The character names are the secondary characters from Final Fantasy: Mystic Quest. Interesting....

I've noticed a handful of such "genre mash" RPG games being released lately. What happened to the old-school RPG genre?

@bwansy: have you even tried playing this game? I think you'll find a pretty classic RPG experience.

One thing it really badly needs is the ability to check the bestiary in combat; otherwise you've no incentive to play particularly tactically.

Heh, I took a glance at the game on the main page, and at the picture--and realized all the characters' names were from Final Fantasy: Mystic Quest. I've thinking for a while that someone should make a game as homage to Mystic Quest for its 20th or 25th anniversary . . . not that it was a great game, but it was my first RPG, and probably a lot of other people's too, plus it was memorable, even if it wasn't so great. So maybe I'll take a shot at this.

Very adorable, but be careful! There's no conformation for (m)any thing(s). So, hypothetically speaking, you could go to the inn and reset your points by accident instead of resting your party like you intended.

There's a new version up now that should fix a few bugs.

Aw, drat. I saw the screenshots and hoped it'd be an RPG with a combat system that doesn't involve choosing "attack" from a menu a hundred thousand times.

Here's an interesting little bug. When you travel from screen to screen in a dungeon it randomly respawns chests. If you keep hopping back and fore between two empty screens you could eventually have all of the money in the world.

For a game about a company of mercenaries, money seems particularly useless. I played through to lvl 33, skipping almost all of the fights, and still had enough to upgrade all of my equipment at the blacksmith (about 1/10 of what I accumulated) and grab far more potions and ethers than I could use; It'd be nice to have expensive items in the shop to work toward or something.

I want to be able to buy a lvl 1 Ragnarok sword for 1000000! Can't find one except for through random drops now.

Speaking of which, after getting about mid-lvl (enough to where you could have 20 AP), every enemy team will fall to you if you fight intelligently (stuns, debuffs, party buffs, ect.) and you can go as deep as you want without having to worry about new enemies to crush you.
It's a good way to get equipment many levels above your parties.

And then, sidequests having a level requirement before you can attempt them annoys me to no end. A floor reached requirement I can see, but I dodge the random encounters, and rather well I might say. I'm deeper than the final boss (should the fact there's a final boss be spoiled?) and still can't save the kitty. D:

Is the fact that the weapons have levels normal for an RPG? I've played a few and I've never seen this before. It is annoying to me, to not be able to tell if one thing is better than another because of the fact that it is actually better or if it is simply because it is at a higher level. Meaning, I would want to be able to compare the two things at the same level - the better item might come off as worse just because it isn't upgraded.

Is there any way to tell which level you haven't fully explored? Status keeps telling me I'm one short,and I don't know which one it is.

I've noticed that how well I do against monsters often depends on who goes first. If I go first, I can kill them all most of the time without getting hurt. If they go first, an area attack can annihilate my entire party or most of it, leaving the rest extremely vulnerable.

Disgaea is the first rpg I know of to implement such a mechanic (you would literally travel into the item and go down 'levels' aka random maps. Leveling an item from 1-100 could take awhile, though there were ways of streamlining the process for maximum stat gain. Combined with the myriad of other leveling mechanics, Disgaea might as well be known as "Level Up: The Game". Fun times though.

As for determining item worth regardless of level, it seems that every item of the same type and rarity will have the equal core stats (mdef for head gear, def for armor, etc.). The same stat growths per level for the additional stats the equipment might raise are likewise similar. For example: if one armor raises speed +10 while another raises crit +5, you can assume the crit would be +10 when that item is the same level as the other (assuming same rarity).

It is a pretty basic system, but it seems to work well enough. I agree it could be presented in a bit more user friendly manner, though considering how forgiving the game is overall, a few stat points here and there are really a minor issue at best.

Still have plenty left to do with this game, and I wager it will eat up yet more of my time. I hope to see more games from the creator in the future.

Whats a good easy way to lvl up?

Oh c'mon, "as with all RPGs, the combat plays a big role"? Either you have never played a real CRPG or forgotten about it. Try Planescape: Torment or Baldur's Gate 2 and repeat that. You can get through those games with very little grinding and mostly talking and character development, as opposed to Crystal Story as a typical JPRG which tells a fixed story with a little combat inbetween. This doesn't mean Crystal Story is bad, but it's a very different genre and has little to do with true roleplaying. Even Nethack has more intricate story development than this one, and there aren't even any characters in there...

I don't understand how I'm supposed to beat the expert lvl of Zombie Defense when the game doesn't register half of my clicks.

What's up with that lag?