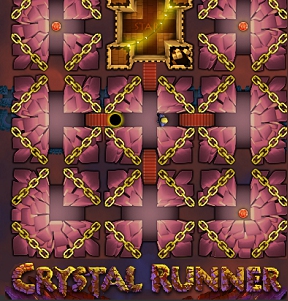 Crystal Runner, the new topdown action game release from Lionwood Studios, has quite the classic arcade sensibility. In it, you run around "Crystal World" collecting coins, rescuing people, rotating rooms, and exploding bombs in order to avoid being fried by malevolent black holes... I think Kevin Flynn was playing something like that back in 1982. However, while its inspirations are clearly old-school, its visuals and gameplay make for a modern remix.

Using the [arrow] keys to navigate from room to room in each angularly-pathed level, the goal is to collect all the coins and make your way to the escape ship. Each level consists of numerous square rooms, the blue ones of which can be rotated with the [spacebar], and yellow ones that rotate on their own. Keep in mind that the walk-ways between each room disappear when you move away from them. Other than falling off the levels, the main threat is black holes. They will chase you if they spot you down a corridor, and spit chunks of flame at you. They can be stopped with the bombs planted with the [crtl] or [X] key, but watch out, because said bombs can hurt you too. Collecting keys will open new rooms, some of which contain captives that can be returned to your ship for bonus points. The [Z] key zooms the camera out, allowing you to view the whole level. Oh, and be quick... you're racing the clock!

Despite how repetitive they can get, I have always enjoyed maze games. By their very structure they combine the thrill of discovery and exploration with the high-stakes drama of being chased by something sinister through unfamiliar territory. Crystal Runner takes clear inspiration from the two most successful maze games, Pac-Man and Bomberman, and even if a few of the mechanics aren't particularly original, at least the developers knew to steal from the best.

One original thing about Crystal Runner that I did enjoy was how it caters to multiple playing styles. The fact that the black hole baddies can be neutralized in different ways make for interesting variety. Some levels I found I spent most my time evading them, in others I used my bombs to dispatch them, and other I spent my time using the rotating rooms to trap or deflect them. This may not seem like much, but considering the varying level designs, it added a nice dose of strategy to the action.

The flaws of Crystal Runner are minor but frustrating. Each of its levels resets your progress upon death. This makes it simultaneously frustratingly difficult and frustratingly easy: difficult, as you would think that the time you spent completing the level to near-perfection should count for something; easy since the extra lives are reset as well, and often times there are more than one per level. This mean it often feels like there's no real danger of a game over, and repeating levels from the start just gets annoying. After all, when Pac-Man ate a dot, it stayed eaten. When Crystal Runner grabs a coin, why not let him keep it? Likewise, the time-limits on some levels feel quite unforgiving, and the rate at which black holes respawn makes bombs feel a little useless. Maybe I just don't have Billy Mitchell levels of arcade skills, but Crystal Runner's challenge often feels artificial in nature.

If you don't mind a little cheap difficulty though, there's a lot to like in Crystal Runner. The graphics and music are quite cool, the tutorials are snarky (if not always helpful), and the victory noise at the end of each level is catchy. Really, The only thing missing from this coin-filled crystal maze is Richard O'Brien.

Kevin Flynn AND Billy Mitchell in one article?! Too much 1337 for one review, Tricky.

I can't load the game at all.

Working on a Mac, latest OS version, no matter if I try with FF, Safari or Google Chrome, the game window doesn't even load at all.

I guess I'll try on my PC later when I get home.

[I'm also on a Mac and it's loading just fine in all the browsers listed above. Please update your Flash Player and disable browser extensions (like ad blockers) as these free Flash games are ad supported. Thank you. :) -Jay]

I've seen this game on other sites - with an odd description. It bills itself as a 'non-trivial' game. What do they mean by that? It seems like a weird descriptor.

Anyhow, I had fun playing through. Some levels the time limit made for intense close-calls.

I really wanted to like this game, but I don't.

At its heart, the gameplay is Pac-Man, plus some user-controlled intersections in the maze, plus bombs. That's a fairly elegant concept, with a lot of potential. Sadly, everything else in the game, more than anything else, just seems to get in the way.

First, the gameplay itself. The grid squares are overly large, which makes it hard to turn corners quickly with anything less than pixel-perfect precision--this makes timed levels far harder than they really need to be (see Level 16 for an example). The concept that "the bridges between grid squares disappear when you don't need them" does nothing to contribute to the game, and this in fact makes the effective size of the grid squares even smaller when you need to dodge projectiles (see Level 19).

Second, the theming seems all wrong for a game with this sort of gameplay. Why do we begin in a castle? Why do we end in a boat? It feels like a much more minimalist approach would have complemented the gameplay better.

Third...well, if they put so much effort into the graphics for everything else, why are the enemies...plain ol' black circles? Given everything else they'd presented, I would've expected big lumbering demons or something...

I beat the game with every trophy except two, "Unlock 10 trofies" and "Unlock 15 trofies" but somehow--unbeknown to me--I managed to achieve "Unlock 5 trofies"...what exactly is it that i did to get that, and how do i get the other two??