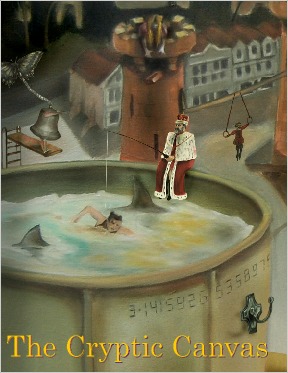 In the tradition of 50 Dark Movies, Hidden in a Painting and 50 Comedies, here's another great game about identifying the titles of movies from a drawing full of visual puns. While I recognize that the previous sentence stretches the definition of both "game" and "great", I just can't resist a smorgasbord of rebuses. I can't even resist saying "a smorgasbord of rebuses". I've been saying it non-stop for the last half-hour, sometimes in a falsetto cockney accent, and the spider who lives in the upper-Northwest corner of my office is looking at me a little nervously. Feel free to set up shop under the porch instead, Mrs. Webberdasher. I won't change who I am.

So, Cryptic Canvas lets you guess the titles of 50 more movies from clues sprinkled throughout a handsome illustration by Amie Bolissian, and gathered under the theme of "great movies". This is again an abuse of the word "great", because Bolt is in there. That's not a spoiler; there's a big ol' unmistakable picture of a bolt, just sitting there on the grass, and the only reason I had a hard time solving that mysterious riddle is that my fingers kept typing "Wall-E" instead, out of principle.

That's not the only easy clue in the painting. Depending on how well you know your recent Hollywood hits, this could keep you occupied for a very short time indeed. But there are some very clever hints as well, and the interface is pleasant enough (the manual zoom feature is a blessing), and the artist commits herself to each gag, so even the brain-coagulatingly simple ones may satisfy you on the "lol easy riddle is easy" level.

A Note About the Sign-In: Cryptic Canvas asks you for your email address, as a reference so that you don't lose your progress. However, I gave it a fake address, and I was able to quit and resume my game later from the same computer without having to input the address again. So if you want to remain the anonymous cinephile, you can.

You, ahem, named the spider in the corner of your office?

I'm at 29 correct guesses and I'm stuck. Can anyone think of what the dragon stands for?

Now THIS game I like. I think the clues and movies are much better than in 50 comedies.

I love how you'll be looking at a clue, wondering what movie it is, when suddenly you notice something you hadn't seen before, and it all makes sense. Well, at least it happens to ME a lot XD

So far I have found:

Karo, I just figured out the dragon:

and I can't find

Look in the sky

I can't find it either. There are three things in the sky-

snakes on a plane, eagle eye, and some other bird with a flower in it's mouth.

Whoops! I got my movie titles confused. As far as I can tell there is no:

iron eagle -- I was directing you eagle eye.

I can't find the thing that Linus is after either.

I was so sure those cheerleaders were 'girlfight' :( boo.

okay, I am left with

but that's only 6 things and I need 8 more things.

I was sure they were Ninja Cheerleaders. But nooooo XD

Pirates of the Caribbean

I keep thinking some pictures are linked and they're not. That might help...

The bird with the flowers is

What is the two guys moving a painting?

what is the painting of?

Okay I give up.

So I don't know why I seem to have four things not three. Any help?

I couldn't have gotten moulin rouge or the attack of the clones without looking at the spoilers.

I never knew that moulin was french for mill.

OK the high kicking girls and the object/person in front of them are one clue.
Answer is

Attack of the Clones

The lady at the front with the books:

As always with this sort of thing, it's sometimes hard to work around the perfectly legitimate alternate answers like "Airplane!" and "Man on Wire".

Cool game! I started making a hint-thru for it but I realized how ridiculous some of the hints would be =P. For example:

The black bird: What type of bird is it? > It is a crow > There was a movie named after this bird > Answer: The Crow

The bi-plane: Look closely at the plane > Notice anything slithering near the nose? > There are snakes on this plane! > Answer: Snakes on a Plane

Yeah, can't get it to load on Firefox either. (Yes, Jay, I moved to Firefox, great browser - I scammed my employer into giving my admin rights to my PC and laptop so I could install it myself...)

That's strange, I played it just fine on Firefox 3. Well, other than figuring out the cheerleaders ...

Firefox users: Adblock Plus causes this game not to run on my computer, this might be the problem you're running into. Turn it off or open up the blockable items menu and disable the filter for the topmost item (It should be type: Hidden)

I hope this helps.

I didn't get or like this game....I don't watch enough films to play it :(

I know that the solution is based on the actual movie names which sometimes contain the "THE" and sometimes not, but the designer *should* have let both choices work. Now I am forced either to try almost every solution twice or constantly ping IMDB to see if the title has the darn "THE" or not.

Won't load, All I get is a black screen.

At the moment they asked for my email adress, I closed the page. I can't accept that kinda stuff, even when I can just put a fake one.

I don't get the

one. English isn't my mother tongue, so maybe I'm missing something, but aren't those called "lutes"?

JIGuest: They are also called

I played this a little while ago and was rather baffled to discover there's actually more than 50 movies hidden there. I had finally figured out that damn cheerleaders one when I spotted one that had been staring me in the face but I didn't get to check it because it said I had finished!

There's also one you can only enter midway through the game, it's a little buggy - it's the one with the girl dropping the brick.

They have Stardust! One of my favorite movies :)

square of math-ish stuff on the tank.

Hint for the tiny girls?

Maths on the tank:

What's another word for "tiny", and what if they were not just girls but boys and girls?

Thanks, paolo. The all girls thing threw me off. Plus, I've never heard of that movie!

There are some where I think I'm right, but I can't get it to work!
Like

Heh, I used a fresh e-mail address as "login" and what do you know - spam almost immediately started arriving. It's current rate is about 2 per day.

I SO hate that.

I thought the train with the red dots, was "train spotting", but thats not working
and the lady interviwing dracula i thought that was "interview with a vampire"

The Fisher King and The Green Mile (note the color of the sign; it says nothing about altitude)

Sully
You're SO close.

Trainspotting (one word) and Interview with THE Vampire

After reading a few spoilers I realized I would need my glasses--I'm missing some pretty simple details, but they are just so small and fuzzy!!

The cheerleaders are Attack of the Clones.

The C's should be interpreted within the same vein as the movie they represent, or at least in the same relative time period.

I liked the clue, but I didn't get why Enter the Dragon was included - it's well over 20 years old (unless there's been a remake).

I still don't know what the thing in front of the cheerleaders is.

A just finished this and managed to get 49 out of 50.
It's a great and addicting puzzle, but I would be remiss if I didn't point out a few aspects of this puzzle that are "unfair."

The "pirates", "scream" and "brick" clues are inconsistent with the rest of the puzzle, in that they *add* features which point you *away* from the correct title.

The one with the cheerleaders is flat out ridiculous and makes no sense. I only stumbled on the correct answer by accident and even as I was typing it in, I thought to myself "this *can't* be it."

One of them requires knowledge of a foreign language... not fair! (this is the one I couldn't get)

The one for "Scream" didn't have something extra. The painting "The Scream" was stolen, so the people holding it (who I assumed were stealing it) would've been an extra hint (which I nevertheless missed). One of those "now that I think about it" things.

Though the "pirates" one did throw me for a while. Why were they playing marbles?

What I really didn't like were the ones that required pretty obscure (to me) knowledge:

Like the ones to do with flags, such as "The Last King of Scotland". I didn't recognize the flag, and I chose to consult the walkthrough rather than scour my encyclopedia.

Also, the lyres. I don't know what a lyre looks like, so I couldn't get the "Liar Liar" one on my own. Again, I didn't feel like googling "stringed instruments" to find out what the heck they were.

But all in all, this was pretty enjoyable.

IN the walkthrough, it says as one of the choices, Pianist, it's supposed to be the pianist. I feel kinda silly but I spent about five minutes trying to figure out how on earth I was spelling it wrong... ^_^

They're not marbles, they're Carib-beans! :D

Note: Not sure if those actually exist.

There totally are such things as carob beans! It all makes sense now!