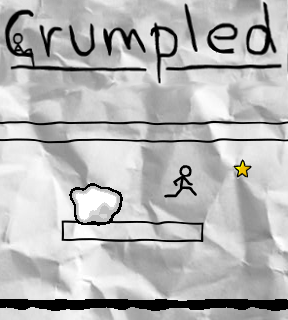 Ever since the NES days, gamers have known that there is no greater friendship than that of a boy and his blob. It's as true for Fancy Pants Styled stickmen living in a world of notebook paper, as it was in Blobolonia. And considering how crazy that notebook paper world can get, they'll need to push their teamwork skills to the limit. Otherwise... they'll just end up Crumpled.

An artistic platformer by Oslo Albet, Crumpled purports to have a little of everything, including, quote, "parkour, cooperative puzzles, bullet time, combos..." That's a pretty accurate description, and it's always fun when a minimalistic game packs itself to the brim with movement mechanics. Movement is fluid, and the levels are cleverly designed. The big negative though is the controls. Albet has done the "control two characters at the same time" thing quite well in the Fireboy and Watergirl series. Here though, the mouse/keyboard integration is wonky, and, since the stick figure is moved with the [WASD] keys, having jump be the [spacebar] instead of the [W] feels weird and often breaks the flow. Combine that with some shoddy hit detection when you make platforms with the blob, and you have a recipe for frustration. If you can acclimate yourself to wonkiness, though, you'll find Crumpled to be a neat little gem that you'll want to stick with.

Update: Oslo has responded to the frustration players were having with the controls and has improved them significantly so they are now much more intuitive, making Crumpled a lot more enjoyable and accessible to a wider audience. Press [A] and [D] to move the character left and right, [W] for jump. Press [S] to hang down when on a ledge, and to slide down when on a wall. Wall jumping is as easy as pressing [W] to jump, then alternating [A] and [D].

This is an interesting game, but there is some awkwardness with the controls. In addition to those mentioned in the review:

-- Third levels instruction to "take a run-up to jump farther" fails to mention that momentum is lost completely upon reaching the end of a platform. You'll need to jump while running a bit before reaching the edge. This should be explained, as it's an idiosyncratic sort of behavior for a platformer. (General habits would dictate that if you failed to make a jump, it likely means you've jumped too early, rather than too late.)

-- C key and Scroll Wheel are both awkward to manipulate in the middle of a combo, and those are the only options for switching the color of the blob. The best solution would be to use the right mouse-button, but of course that's unavailable in a flash game, since it's reserved for bringing up the flash settings contextual menu. Shift or Control would also be better than C, as neither force you to move your fingers off the directional WASD keys.

Combo #2 in level 8 requires the green blob, but I don't see the green power-up anywhere in the level. Am I just being daft, or is this a game-design mistake.

Lastly, and most damningly for a game with this many collectibles, speed-runs, and combo-runs to complete, upon reloading the browser window (after Flash had crashed in Chrome) all progress has been reset. I guess I won't be continuing with this one. Oh, well. It was enjoyable while it lasted...

Talking of level 8 did you get the flat yellow?

Yup, got the flat yellow and the weighted square, but didn't see any green to be found.

Again with the games that hate me for having a trackpad.

E for Explore Mode would have been really helpful to know on the first level, which I restarted twice because I'd misplaced my blob.

I really, really wanted to like this game. I really did. Unfortunately, the controls seem to be too much for me. I could barely get through even the first level merely trying to differentiate between up (W) and jump (Space) and needing to press S to slide down a wall was frustrating. Why can't I just walk off the ledge and fall!?
And...

...in the third (yes, the THIRD) level, the only way I could get past the "Take a run-up to jump farther" section was to (E)xplore ahead to get the yellow blob and come back to make a ledge to get over the pillar...? Obviously I'm missing the whole "run-up" thing that lets you "jump farther."

Once I got to level 4... forget it. Too many keys to know and remember to make the game fun. It turned more into an exercise in frustration to me than anything.

If the developer could find a way to simplify the controls I would probably find this game much more enjoyable. I am *NOT* saying it's a bad game, but it's just simply too complex for me.

I think I'd have enjoyed this game, but the space bar to jump thing is too awkward for me. It'd feel more natural with W for jump, it doesn't conflict with the current purpose of the button anyway. Perhaps it conflicts with the wall jump, but that'd be solved by just requiring A or D to be held together with W to perform a wall jump in that direction.

Very good game!
But I have to ask: Why not to give us the option WASD/ARROW KEYS?
Is it so hard or it's just laziness?
This is a good way to ruin a great game.

I have to agree with Nando. I'm a left handed mouser, and the whole WASD thing is difficult if you need to use the mouse at the same time. *Also* needing the space to jump just makes it impossible, and I'm not going to reconfigure just for a game. This is a fun game, despite the hand cramp I got trying to play, but I couldn't make it past level 4 with all the hand gymnastics. Shame :( Simplify, or allow key customization, and I think this would be an astounding game.

Also, the game is rather buggy. Not only level 8 doesn't have green blob, finishing the training for combo #2 crashes the game and resets the achievement.

I'll favorite the link for this game and come back to it in a month or so. Hopefully it gets tweaked, fixed and debugged.

I was happy to see the qwerty/azerty command, since it's not there often in games. But it doesn't work, too bad for my hope to be able to play this game.

Has the issue of game crashing and achievement resetting also been fixed?