Pipkin Games' little red chomper guy is back for another round of Boulder Dash-like arcade fun, in Crazy Digger 2! Use the [WASD] or [arrow] keys to guide the digger around each of the 25 levels, with the goal of eating all the gems. You are able chomp through the green dirt and push around blue rocks in pursuit of your goal, but be warned: while the digger is not affected by gravity, a rock or gem will roll on curved surfaces, and without any support, it will start plummeting to the bottom of the screen. That can lead to a painful squishing or a cracking of gems, so watch out! There are enemies to avoid as well, including new spinning ones which will follow a path along the ever-changing wall layout. However, they are also vulnerable to squishing... though dropping a gem on them will crack the gem, ending the level. New to this installment are Locked Crystals, which must be unlocked with a collision with a wall or other object, before being collectible. 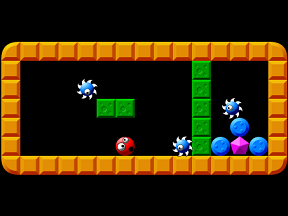 Call it shallow, but the grating music of the original Crazy Digger made us little uncertain about how the game would be received. At the very least, Crazy Digger 2 upgrades the soundtrack from "obnoxious" to "cloying", which is as good a start as any. However, the rest of the experience has been kicked up a notch as well: the puzzles are a good deal cleverer, while being much fairer with enemy placement, meaning fewer lost lives as the result of not being fast enough on the keys. This, along with the new inclusion of a level editor and new levels being shared on the game's main website, marks Crazy Digger 2 as the kind of sequel that even those who skipped the original will totally dig.

I liked the last one, so I tried this right away. It was fun for a few levels until the

turned up.
Then I clicked away.
Btw this has some annoying sexist ad while loading.

Hi Hespetre. Can you please be more specific? Without screenshots we can't do anything about it because we have no idea what to look for. Unfortunately, however, if it's within the game itself, those ads are delivered by a network chosen by the developer and out of our control.

Sorry, I tried to load it again and then I didn´t see it. The first time the ad showed "on top of" the game while loading. So I suppose it was "in" the game? There was some scantily clad action figure-like female with *balloons* on the front.

I've said it before and I'll say it again: I hate games that base your score on how fast you complete a level.

6,845 Views
5 Comments
chrpa— Jayisgames needs your help to continue providing quality content. Click for details This is the fourth installment of Rinnogogo's Holy Night series (links to previous games you find below) and it is again lovely and delicate game with an...  ...

6,161 Views
0 Comments
chrpa— Jayisgames needs your help to continue providing quality content. Click for details Welcome to Weekday Puzzle! We start with Babarageo's cute rabbit in a role of Pacman who tries to eat his way through a maze and get to...  ...

6,636 Views
18 Comments
chrpa— Jayisgames needs your help to continue providing quality content. Click for details Hi, it's the time for a Christmas special and it's here... ...and it's very plain, I'm sorry. There just aren't new Christmas games out - Flash games...  ...

3,031 Views
0 Comments
jayisgames.com— If you are a gamer or have done gaming in the past, most certainly you would have come across the word Auto Clicker. What is that tool? What are its features? What are its advantages? We will discuss each aspect...  ...