A new collection of levels for Pipkin Games' Crazy Digger 2? That's balderdash! Or Boulder Dash, rather, since that's what this arcade puzzle game essentially is. But as they say, if you build a level editor, players will come... and essentially build an expansion pack for you if you let them. And let's be glad they have, because the Crazy Digger 2 Level Pack is sure to satiate all the red-circle-chomping, gem-dropping, saw-blade spinning cravings we've all been having. Or maybe that was just me. 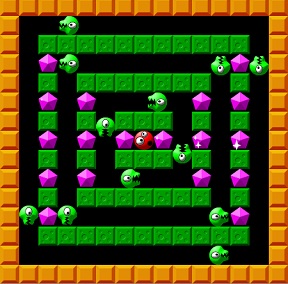 Being essentially a collection of new levels, Crazy Digger 2 Level Pack plays just like the original. Use the [WASD] or [arrow] keys to guide the digger around each of the 25 levels, with the goal of eating all the gems. You are able chomp through the green dirt and push the blue rocks around, but be warned... while the Digger is not affected by gravity, a rock or gem will roll off of unsupported curved surfaces, plummeting down to the screen. That can lead to a painful squishing or a cracking of gems, so watch out! There are enemies to avoid as well, each with their own patterns of movement. But while they too are vulnerable to squishing, dropping a gem on them will crack the gem, ending the level. And, of course, there are those Locked Crystals, which must be unlocked with a collision with a wall or other object, before being collectible. Be warned: if you thought level 25 of the original Crazy Digger 2 was, well, crazy, things only get, dare I say, crazier in this level pack. Expect enemies galore, and to be ingduck falling blocks left and right. Those new to the series will definitely want to start with the original, but fans ready to pick up right where they left off, challenge-wise, should waste no time sinking their teeth in. Can you dig it?

Sadly this picks up about where the previous version started to get really annoying. I like the puzzle side of this, and some avoidance is ok, but there's just too much running from 'enemies'. And it starts almost immediately.

3,683 Views
2 Comments
chrpa— Jayisgames needs your help to continue providing quality content. Click for details Forgotten Hill is a strange place, but most of all, a dangerous one, especially for servants. Archibald could tell you things - and he does in this...  ...