Moonloop's retro shooter Counter Terror is so packed with action and bullets they probably have to plug its orifices to keep its manliness from running out all over the carpet. Your job, as part of an elite squad of heroes, is to execute missions to take out the bad guys and rescue hostages, leading up to a final confrontation with an evil scientist who knows all that strange and mystifying dangerous stuff like "chemistry" and "math". Use the [arrow] keys to move, [Z] to jump, and [X] to shoot. [S] will cycle through your special weapons like grenades, deployable ropes, and flashbangs, while [C] will use whichever is equipped. You'll need to use cover, cunning, and the advanced technique known as "spraying everything ahead of you with bullets" in order to save the day... as long as you don't fall and break your own neck in the process. 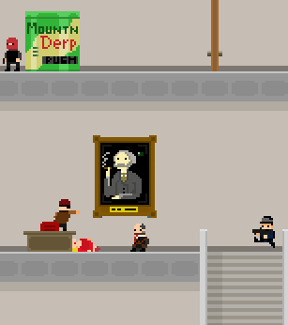 Counter Terror is one of those weird little games that is only really as difficult as you make it... literally since you can set the difficulty for each level. The game wants you to be careful and sneaky, but as long as you're not in danger of ventilating a hostage hopping around like a deranged armed rabbit will do just fine for a lot of the time. Hey, it's not my fault Leroy Jenkins is my spirit animal. If you were graded more on the finer points of your performance instead of just baddies shot and hostages rescued you might be more motivated to think strategically, and you really should try to since the levels tend to be laid out for it in some really clever ways with lots of opportunity to tackle rooms from different angles. A bigger challenge for some might be getting used to the game's control scheme, with firing and jumping being bound to different buttons from your typical shooter in a way that might be counter-intuitive. If it pushes all the right buttons for you, however, Counter Terror is a gleefully goofy and fun little shooter with opportunities for strategy, shooting, and kicking keisters and chewing gum all at one.

Okay, how are you supposed to take care of those red-hatted baddies like the one shown standing on the desk in the picture when they've got a hostage? If you try to get close enough to lob a flashbang, they start tossing grenades & BOOM, dead hostages.

Hi Rygar! I used the "bounce and run" technique. You don't actually need the flashbang to land that close to be effective, but I just shot downwards from mid-jump as I was leaping into range, which let me tag him before he could react and save the hostages. :) Not exactly realworld tactics, but eh, whatever works! Another thing to remember is that grenades can destroy the floor, so you can blow a hole through the floor above and try dropping in a flashbang or coming at him that way.

Thanks for the awesome review Dora! :D

@Ryan the red-hatted baddies are quite vicious, they have sunglasses so you cannot even use a flashbang with them, but they throw a nade only if you are very close to them, you have to get them from behind when possible or act quickly and eliminate them before they start to throw nades all over the place!
Every one of them is beatable just being fast enough, but you can also open a hole on the floor above them and bring them death from above, for example! :3

Had a lot of fun completing this, but it gets very buggy at the end. Somewhere around the switch on the last level I couldn't select grenades. It would just flash a stars/night sky screen. If I kept pressing it sometimes went permanently to the night screen. After completing I can't replay levels as I just get a horrible noise, and that same damn night screen.

But other than that, great game....

I'm stuck on the starry sky glitch too. Does this game just not like Google Chrome?

Got the star spangled screen a couple of times as well. I think it disappears when you cycle through your weapons.
Although it can almost instantly kill you as well.

Besides this and a couple of other flaws (falling through the bottom left corner of the cargo ship, for instance), this is actually a very entertaining piece of work, highly addicting. Imo the biggest flaw is that it's too short; dying (unexpectedly) isn't enough of a setback to be annoying, since the pace is fast and the levels are short.

One other bug to report: Closing the window after completing a few levels (a must when one is sneaking some gameplay into the workplace), all my progress was lost on two different occasions. It saves sometimes, though. Chrome, Mac OS 7.5

Any chance for Y to jump on QWERTZ?

Major problem: not enough checkpoints. Especially given their inappropriate locations. Well, on the 2nd cargo ship mission I ran into the check point very quickly, then painstakingly made it through the rest of the ship, only to stupidly fall to my death from sheer clumsiness. Am I going back to do it all over again? Nope! Thus, I am completely finished with the game, though I would enjoy exploring more. How many people go through this experience?

Another problem: can't turn music off without turning FX off. How can people still be making games with that feature? Especially when the music is endlessly repetitive. It's so bizarre to me. At no point do programmers think "Maybe someone will get tired of this music but will still like the FX"? I'd like to see JIG crusade for this one little requirement, as obvious as having seat belts in every car. Who's with me?

Thanks to everyone to have tried the game, we're sorry for the infamous starry-sky glitch :( the version uploaded by FOG got messed up somehow, even if you can still beat the game.
We're working on the sequel and it will be a HUGE step forward even compared to the first game :)