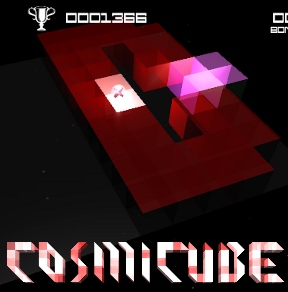 CosmiCube, by Patrick Richardson, is one of those 'older games with a new twist' releases that you see every once in a while. The game uses the Unity engine to render a 3-D take on Marble Madness. The marble's track is made of red cubes mounted on a larger black cube. Your goal is to get a marble from its starting point onto the goal by moving your mouse to tilt the playing field. You're aided (and hampered) by an impressive physics simulation that feels very authentic and real, all while listening to a fast-paced soundtrack that fits the action and setting well.

The difficulty of the game is that it's a very real simulation of a marble on a glass cube covered with oil. The edges of the marble's track aren't banked at all and friction isn't a factor, so it's easy to lose a marble to Newton's Third Law when you accidentally tilt the track a bit too far. The energy gained from your enthusiastic tilt often causes it to go off the edge in the other direction. Cue a deep breath and level restart.

Fortunately, you start with a lot of lives and you gain one every time you finish a level successfully. Run out of lives, however, and you have to start the entire game over from the beginning. There's a timer going that measures your entire playthrough, and although it gives you points for finishing a level quickly, there are no other penalties for taking it slow. As you get used to the controls, that's the strategy that works best. Like in most reflex-based games, however, you'll find that recklessness is your worst enemy as time and again, another marble spirals off into the void. It's not surprising that as of this writing, the main screen lists thousands of plays and 0 successful completions of CosmiCube's 25 levels.

Overall, CosmiCube is an interesting, frustrating, and yet strangely fun update to the classic Marble Madness. It'll entertain you... until you remember why "madness" was in the original's name to begin with.

CosmiCube is also available to download for both Mac and Windows.

ugh level 6 with the hills is impossible!

I can't seem to enter my name on the second screen. I can't continue with a blank name. Dang

I guess that's what I get for using a Mac.

[Please reload the page and try again. I think there may have been a problem with the embed code. I have a Mac and just tried and it worked for me. -Jay]

I've reloaded the page 3 different times, but the game never pops up. I get a nice empty space surrounded by ads and links to other games. :(

[The game is a Unity game and requires the Unity plug-in. Click "plug-in info" in the game header for the download page. -Jay]

Eek, way to difficult. I solved lvl 6 after a dozen tries, but lvl 7 is even more crazy. Can't imagine there are 25 lvls of this, frustrating indeed.

haha, this is totally hard. As soon as you get to level 6, you have to start developing a new set of skills.

I found that I could get over the hills by getting a little bit of momentum, rolling part way up and then flicking quickly backwards. This gets the ball over the hill without the momentum to throw it off the course.

and for the guest with the 'I guess that's what I get for using a Mac' comment - it sounds like you have confidence issues in your computer maybe you and your computer should go for counseling. ;-)

Same as JIGuest: I can start, get to a name entry screen and can't enter my name and the only button that works is 'Back'. On a Mac too, first time playing 5 minutes ago so I should have the fix for the embed code - John

if caps lock is on or the shift key is being held, it won't let you enter your name or press play.

That could be the first mouse-based game ever that was actually easier to control via touchpad. Quite accurate physics there! That fact cost me several lifes in level 6 - until I realized that the blocks can also be drawn away under the marble.

How am I supposed to jump over the gap? Probably I was too careful, but going as fast as I could didn't result in anything useful.

I have played Marble Madness on the C64 though, and must say the original game had more appeal. Large, beautiful landscapes with multiple paths to explore, no blindingly white reflections, different surface textures... plus the levels didn't expect you to stare at the junction of two segments for a couple of minutes while you make miniscule finger movements.

I tried toggling caps-lock on and off, was definitely not holding down shift, so it's not that. Odd as unity generally works for me - John

[I've made one more change to the embed code, I hope that works for you. If not, the game is also available to play here. -Jay]

The furthest that has achieved on CosmiCube is level 23 out of 25. I have a video of myself reaching level 19. I will link the video here.

PS If that Mac issue persists I'll be sure to fix it, it's hard for me to test it on a Mac since I have no Mac :(

Eric, that's what was doing it for me. Once I stopped typing things with Shift held, I noticed it worked. I'm using a Mac, and it works fine for me.

Level 6 was the one that killed me... This is a frustrating game. Challenging.

Yeah, I entered the "forget this noise" zone on level 6.