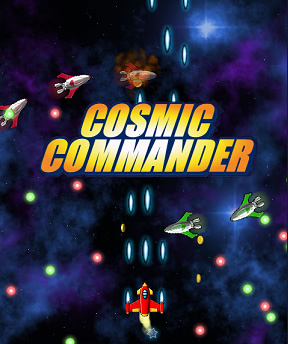 If there's one sci-fi rank that has the highest level of awesome associated with it, it's "commander". Some of the coolest protagonists of all space-time have it appended to their name: Riker, Sisko, Adama... Keen. So it's only fitting that when puzzle-master Johnathan May (The Dark Room) chooses to surprise us with rocking an arcade vertical-scrolling space shooter, that he should dub it Cosmic Commander. And, yep, it has challenge more than worthy of its station.

Cosmic Commander is played entirely with the [mouse], using it to control your spacecraft around the screen. Your weapons fire forward at a constant rate, making this a game of steering more than anything. Naturally, crashing into enemies or their bullets drain your health while shooting them nets you points. Blasted enemies release power-ups such as upgraded weapons, a temporary shield, and extra health. They also release coins which are used between levels to purchase upgrades to your ship, as well as extra lives. Also on-screen is a three stage power-up gauge, filled by blasting and used by clicking the mouse: the first stage damages all enemies on the screen, the second stage adds more damage, and the third even more, as well as giving you a shield. Using the gauge drains it. Now go! Only you can save mankind!

Analysis: A word of warning: I may be a little skewed in my opinions, since I love me some bullet-hells. As a subgenre, it's often seen as particularly casual-unfriendly, filled with terms like "hit-box" and gameplay that looks like this. I've always found this a little strange since, at it's base, bullet hells are a combination of two quite casual-friendly game-types: avoidance games and shooters. It's just that instead of shooting baddies while avoiding bullets, you're avoiding bullets while shooting baddies. That's kind of what I want in a shooter: while I see and enjoy the appeal of mowing down hordes of relatively helpless aliens until I'm taken down by a lucky shot, I sometimes want to feel like the lone guardian taking on what looks to be an unstoppable empire. I want to be Skywalker locking my s-foils into attack position and flying solo against the Death Star.

Cosmic Commander is sort of a bullet-hell-lite... a bullet heck, if you will. Certainly, its difficulty starts off strong and never relents, but it does modify typical elements of the genre to make it a little friendlier: The game is generous with its health and power-ups, the bullets follow clear, logical patterns (and are easily spotted against the background), and only direct hits to the center of your ship take away life. Throw in the thumping techno soundtrack and the cool explosion effects and you've got yourself a winner.

Cosmic Commander does have a few demerits in its record. The utter lack of any documentation is definitely a negative, meaning that for a couple of levels it is going to feel more than a little trial-and-error. Be sure to load up on those weapon upgrades! Otherwise the later baddies will be nigh-well invincible. Also, that your ship follows a mouse-controlled dot, rather than speeding along with it, means that the lag in movement might annoyingly steer you into more than a couple bullets before you get the hang of it. Finally, and this is a personal opinion, I found some of the enemy ship designs to be a little uninspired. I don't know if it would have been worth the processing to apply the same 2.5D effects to the mooks as your ship and the bosses, but as it stands, the minor baddies look a little out of place by comparison.

One of the more serious design flaws is that the gold coins look almost exactly like the golden bullets that some enemies shoot at you. Causing me to try to "collect" bullets into my ship's hull...

Minter lives!
(and he hates us poor gamers)

Yeah, even on the first level there were way too many bullets and gold coins on the screen for me... ._.

Jonathan May, one of the greatest puzzle game designers around, wizard of woolythinking, at long last comes back to us with . . . a mashup of Asteroids and Space Invaders?

Did I miss a memo here?

Or is this "Johnathan May" a different chap entirely?

He told me he had always wanted to make a shmup, and this is it.

But I don't see how you can even remotely call it a mashup of asteroids and space invaders. It's nothing like either of those two games.

One of just a few online browser games I found myself playing to the very end. One of the only online games I bothered to hit the "comment" button for.

It might be a familiar formula, but the quality as well as simplicity of each element makes it stand out. The graphics are colorful and sparky, but not painful for the eyes as some Japanese shooters can be. The minimalistic design works well and the music is frenetic. Addictive.

Another one that completely misses the point. If you're using a health bar to cover up for the fact that you're basically making things undodgeable, you're not really doing anything but adding fake difficulty. I'm not saying this needs to be a full-on Danmaku shooter or anything like that, but this one just doesn't work very well.

I liked it, but I don't like that you can't swap out upgrades. If you level something all the way up and trade it out for another upgrade, you can never get it again. Shame.

Is there anything but a blank screen after you beat it?

Apparently in classic bullet hell tradition, there's only a tiny spot on your ship that's actually vulnerable to enemy fire. Too bad you're never told what it is.

Making the movement of your ship vague and floaty in a game that's all about skittering your way through masses of enemy fire also seems a bit egregious.

All in all, this game is incredibly annoying first and everything else second.

Maybe he meant 'Galaga' instead of 'space invaders?

Anyhow, yeah, there's a lot of bullets! I agree that the coins shouldn't look like bullets, and the other commenter's statements about the upgrade system. (The 'free guy' purchase should NOT take up a slot, especially).

Yeah, there is more than a blank screen when you beat it, but not much more.

Still, it was fun to watch at times.

The game is too intense usually involving "V" shapes of bullets closing in on me and the before mentioned "collect the bullets".
I can't believe this came from the creator of Dark Room and other great games.

i know my computer isnt that super-uber anymore, but a 1.2GhZ CPU being brought down by a 2d shooter is bad. Thus I cant play this. (I know this is recurring complaint from me..., sorry, but I dont see why I need to buy a 3ghz one for flash games.)

Too easy to move the cursor outside of he play area since its hidden and so I too frequently am paralyzed before I realize what has happened. Mediocre at best. Lags severely on a 2.4Ghz dual-core

3rd place all time!! On my third or forth play-through ;)

The game starts our rather boring and hard, later it gets very interesting, and harder. The difficulty didn't ramp up with my skills (maybe because I used health+shield), so I ended up with an easy ride for the second half. Also, extra lives stay after you buy them, so buy one, then buy the next level weapon.

Short and sweet, no story or ending, but a great diversion and reminiscent of earlier fun. Thanks JayIsGames for the link!

Seriously, you call this casual?! It's called bullet {hell} for a reason. Waaay too many bullets and enemies that are too tough. If it wasn't for having more than 1 hp per life, I'd have gotten a game over on the first level.

I particularly love the

Having no instructions REALLY brings down this game. I love the graphics and music, but having no explanation, for example, of what the "energy" even does makes this game lose a lot potential fun, imho.