Quick, think of something you wouldn't be caught dead doing. Basketball? Springing off a trampoline? Mini golf? KabisCube has taken the concept literally in their refreshing platformer Corpse Box Racers, built with Unity. Your character is a ragdoll type stick figure whose time on this world may have come to an end, but fun with them is only beginning! Your objective is to keep their body safely inside a cardboard box as you race through levels and do all sorts of stunts, some no less than throwing the body through a hoop to score points. I recommend playing through the campaign mode first to familiarize yourself with the controls and mechanics, then moving on to some challenges or infinite mode.

Although there is quite a bit of enjoyment you can get from playing Corpse Box Racers solo, it really becomes a dead man's party when you invite some friends! Featuring up to four players, you can all locally share one keyboard to compete head-to-head. One thing I would really like to see from the developer in the future is an online multiplayer, allowing you to play with friends or random people online. 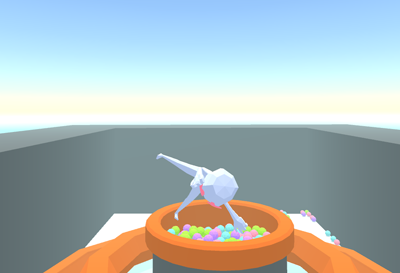 The controls are explained in more detail in the game, but for single player [WASD] controls movement (no arrow keys, unfortunately), E resets the body if you happen to fall out of your box, and Q restarts the level or loop, should you fall off the screen completely. There is also a pause menu accessible by pressing [Esc]. You will may find a few minor bugs and idiosyncrasies in this game, but as KabisCube mentions themselves, it is in early development and there seem to be many updates planned for the near future.

Thats definitely worth a dollar to me. As I explore more if I end up playing a lot I'll go back and donate more.