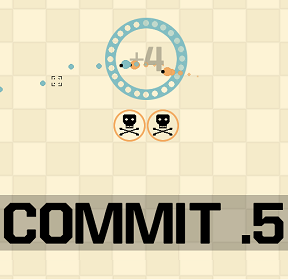 A topdown arena shooter by Daniel Twomey, Commit.5 is a game that's going to make it hard to stay in one place. As the little blue thingy in a world of other-colored thingies, you must survive as long as you can. Move with the [WASD] keys, and blast enemies either by clicking the mouse or by tapping the [arrow] keys for that ol' dual joystick feel. The more black dots an enemy has around its center, the more shots will be needed to take it out. To progress through the game, you must stay within the boundaries of numbered rings for a certain amount of time. Staying within the ring will add to the wave's completion percentage, and moving away from it will reduce it. Later waves will require you to "tag" padlocked rings to unlock the numbered one, or avoid stepping on orange poison rings. There are 25 waves in all, and while, in each, only a certain number of enemies will spawn, faster completion makes for a higher score multiplier.

The flaw of many arena shooters is that strategy can end up being reduced to "Run wherever enemies are not, and fire at the nearest clump." By giving players an incentive to stand their ground for bonus points, Commit.5 has a subtle defense game vibe, and is all the better for it. One life, and restarting from the beginning when you lose it, is probably a little harsh, difficulty-wise, but Commit.5 would fit in perfectly nestled next to the Robotron: 2084 and Smash TV cabinets at Flynn's Arcade.