From the creators of Tiny Castle, Canary, Fault Line, and many more...

In the aftermath of the terrible war that brought Europe to its knees, civilisation struggles to rebuild. Standing in their way is a barren landscape made feral and dangerous by roaming bands of pirates in massive steam tanks, and standing up for them is one lone mercenary tank commander in all of New Britannia... 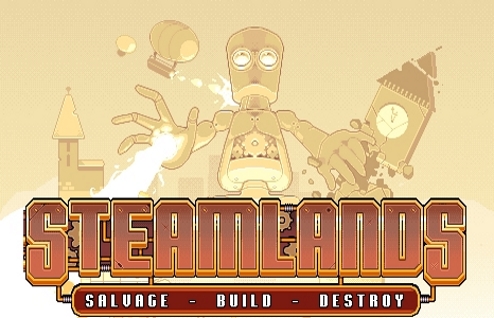 It's just you, a bunch of junk parts, and your trusty engineer in Nitrome's upcoming steampunk strategy/combat game, Steamlands. As you prowl about the dusty streets, you'll encounter pirates and fellow scavengers driving their own patchwork machinations. Using blocks, guns, and other bits of discovered salvage, piece together your own tank, placing weapons in strategic spots and keeping a strong front to protect your coal-shoveling engineer. As the battles wage on, you've got to work to keep shielding strong where it counts, all the while directing your weapons to send your opponent's tank to the scrap heap. When the combat dust settles, you get to pick up the pieces and strengthen your machine.

We had a chance to get our hands on a pre-release version of Steamlands, and we've basically decided we're in love with it. Steamlands is like a building game crossed with a strategy title, combining on-the-fly ship repair and construction with smart weapon and defense placement, sort of like the Captain Forever games. You dispatch foes with brilliant tactics as well as strong defenses, and between levels you get to visit an upgrades store to keep the core of your machine healthy and strong. It's just the right balance between action and cerebral thinking, so you'll never feel overwhelmed by too much activity or bored by too little.

So far, Steamlands looks and plays like a steampunk dream. The combat is wonderful, mixing genres with elegant finesse and allowing you to satisfy your need for visceral battle as well as tactical construction. Driving a huge tank is beyond awesome, as we all have imagined once or twice in our lives, and being able to attach scraps you blow off of enemy vehicles makes you feel like a boss. Any game that looks this good, plays this well, and lets you build and drive patchwork steampunk tanks will earn a permanent place in our browser window!

Steamlands is coming soon from Nitrome, and you can be sure we'll be all over it the minute it's released! 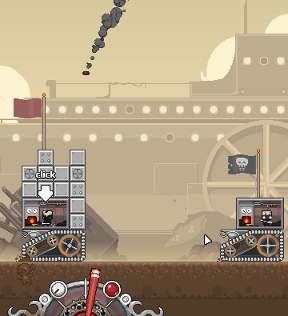 SALVAGE... Traverse the ruins of Europe, gathering materials for your own machinery, fighting off other scavengers and pirates in a fantastic steampunk environment, guv'nor!

BUILD... Design your own tank using materials gathered from the field, applying bonuses and defenses to your vechile in order to withstand attack, generate income, and more! Support your stumbling dystopian economy by buying new uprades, fancy flags, or even just the latest gossip... you never know what you might find out!

DESTROY. Take part in harrowing real-time strategy battles against enemy forces, fighting for power-ups and rebuilding your own defenses before they can bring you down, and then bring out the big guns when things get hairy.

Wow! this game has awesome written all over it!

I don't know what I'm looking forward to more: Steamlands or Super Feed Me.

In my opinion, definitely a potential Top 10 game, possibly even a Top 5 game. It looks challenging, and complex, and most of all addicting. Can't wait for it, but I am sure it will be plenty worth the wait.

I have been waiting so long.
*crys*
Man I will be so excited if its got online multiplayer.

I hope Dirk Valentine is invited to the post apocalyptic steampunk party :)

Steampunk for the win. Looking forward to it.

I am always looking forward to nitrome's next game. sometimes i am disappointed, but not very often. but this, this is killer. not only do I have to wait for new game, but with the sure knowledge that it will be more than awesome? CURSE YOU NITROME! CURSE YOU FOR BEING SO AWESOME!!

As usual, its too much hype over what will PROBABLY be just another one of Nitrome's new "aren't we popular" games.
Not happy, Nitrome. I prefered old stuff, like Hot Air, and Feed Me. But now you can't make anything that has that element that I like. Steamlands doesn't look that good.I don't tihnk it helps that I didn't like Reeve's Mortal engines series of books...

Salvage build destroy? what a sad phrase :( not happy.

Any word on when it's supposed to come out? I want to play it now! :UU

DO WANT.
DAMN YOU NITROME.

What elements of Hot Air and Feed Me did you like? Personally I liked them both, but i'm bored to tears with Hot Air. Feed Me for iphone/iPad will be fun though.

Nitrome's quality depends on their originality of their gimmicks. I don't think anyone wants to see too many sequels of just one game. (Ice Breaker anyone?)

q_boy, you must be interested in Nitrome if you post within two days of this review. This game looks far different from all of the other Nitrome games, and has a far greater potential than most Nitrome games.

Oh look, someone's complaining about a game THAT HASN'T EVEN COME OUT YET.

...Nitrome's been working a while on this one.

From this prerelease review, shows.

Sorry, no multiplayer. There is a secret level editor though...

All the trailer shows you is the player spamming the enemy and then somehow stealing parts.

So yeah, a good concept with a bad trailer. Mixed signals. D:

I love nitrome games. My favorites from them are stuff like Final Ninja and Toxic and Twin Shot, so this looks like it'll be fun.

I think europe is in ruins because of the big mothership in 'Dirk valentine'. I can prove my opinion because there IS a suit of one of the bad guys in dirk valentine. Anyone agree?