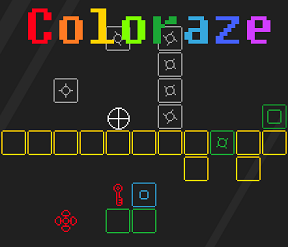 Centered on the mechanic of changing your color to interact with different objects, Coloraze is a simple concept done well. It's one of those works where a string of gameplay elements are introduced in the beginning, then paid off in the long run with a string of puzzles where they collide in interesting ways. The symbolic graphics are minimalist, but evocative. Like a TI-83+ hacked to have a color screen, they have retro-future feel to it that's very cool. Each individual level won't take too much time to play, but with a good ninety included, plus a solid number of levels made by the community using Coloraze's solid level editor, you won't be running out of game any time soon. The lack of concessions to the colorblind is unfortunate, as is the odd behavior that causes the game to seize up for a bit upon completion of a level, but overall, Coloraze is a red-letter game that deserves the blue ribbon.

Love the idea, but the game suffers from uninspired level design and some bad implementation, too. Quit on the level with the moving platform that goes offscreen, doesn't move unless you can see it, and respawns going away from you too far away to reach with a jump.

A solid three. Sometimes, the color changes serve no real purpose. "White objects can be used at all times -" Except when they can't. Nothing really wrong with it, but since the colors aren't necessarily important...it lacks some impact. It feels like a decent maze/puzzle game that had color as an important part of the gameplay added in as an afterthought.

Quit on the level where you have to make precise upsidedown jumps... without having upsidedown show up prior to it. And then trampolines that you lose momentum on...
Ugh.

The game would be great if it was just about the colour puzzles. But it's more about precise jumping than it is about the puzzles.

I rage-quit on a level where I couldn't jump over a teleport square onto a regular square.

I almost quit on an earlier level where I finally managed to jump through a maze only to fall into a tower of spikes, and had to start the level all over again.

This is a perfect example of how a game with promise can lose its audience due to level design. And while many of the levels that actually set out to teach the player a mechanic have issues that should be addressed, the level that I bet most people tune out at is 15, "some other blocks". Which is exactly what it says: a level where all the other mechanics that haven't been demonstrated yet were thrown together, with no discernible way for the player anticipate what they do until it's too late. And on top of that, it demonstrates all these unfamiliar blocks framed around the design concept of level 14, which was the most difficult jumping puzzle the player has dealt with at that point. Hardly a forgiving place to experiment with a new mechanic, let alone several new mechanics at once. Level 15 makes sense closer to the end, after players have proved themselves at least somewhat capable of handling each element on its own.

Loving this game, but I'm hopelessly stuck on level 54. As far as I can tell,

there's no way to make the jump onto the ledge without hitting the purple color-changer, which causes you to fall right through the ledge since it's purple as well.

If anybody could help, I would be endlessly grateful. :D

Got an Xbox Game Pass Subscription? Here's How to Get it Cheaper

655 Views
0 Comments
jayisgames.com— Did you know that there's a way to get an Xbox Game Pass subscription at a reduced price? We're not talking about introductory offers here. We're talking about paying less, every month, for access to a whole library of awesome...  ...

3,363 Views
0 Comments
chrpa— Jayisgames needs your help to continue providing quality content. Click for details Welcome to the Roundup 46 with three games! As mentioned in the previous roundups, only odd-numbered episodes are featured since even-numbered are for Robin Vencel's patrons. More...  ...

2,356 Views
3 Comments
chrpa— Jayisgames needs your help to continue providing quality content. Click for details Hi! Weekday Escape and Weekday Puzzle are here! We've got only two escapes this week - by tomoLaSiDo (unexpectedly easy this time) and a retro one by...  ...

990 Views
0 Comments
jayisgames.com— Gamified marketing has been gaining a lot of traction in recent years, and rightfully so, thanks to its many benefits, from increased brand exposure and engagement to customer attraction. Incorporating gamified content into your digital marketing plan might be just...  ...