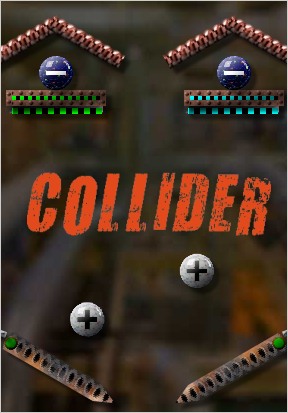 The unanticipated delay in firing up the ol' Large Hadron Collider has given people across the world a shot at being the first to observe the elusive Higgs Boson. Stepping up to the plate for the casual gaming crowd is Dan Russell-Pinson (Block Drop, Tipping Point), with his new game, aptly named Collider.

Using proprietary physics simulation technology, Collider lets you in on the particle-smashing action! Simply annihilate all charged particles by crashing the positive ones into the negative ones. Each of the 25 levels contains a number of positionable particles, which you must place above the eerie green overlay, as well as particles which cannot be moved directly. Once you've placed all the particles, click Play (or hit [Space]) to start them in motion, then just wait and watch. Hit [Space] again to reset if, like the LHC, your mission of collision is a vision of derision and you're wishin' for remission!

Watching particles drop may not exactly sound like a killer game waiting to happen, but Dan throws in a few quirks that quickly turn the game into a puzzle-solving endeavor along the lines of Color Infection. Rolling particles across colored switches activates various levers, platforms, pinwheels, and other moving elements, and colliding particles of different sizes will leave some leftovers after annihilation for you to clean up. Most levels are designed such that many solutions are possible, but there's one "intended" solution that's more elegant than the rest, which is exactly how physics puzzlers should be designed. Only a handful of levels require copious fine-tuning of particle positions, but that doesn't mean that the rest will be a breeze. Some thinking required, although no level should require a Ph.D. in high energy physics. However, in case you do get stuck there are links to the solutions available right in the game.

The spacey music and sound effects clash against the rusty patina of the pipes and the various dingy backgrounds, suggesting a post-apocalyptic environment in which all this colliding is perpetrated. The music is actually quasi-random and is regenerated at the beginning of each level, so it should never weary your ears.

Apparently, Dan never got the message that particles need to collide at velocities pretty durn close to the speed of light in order to be of any use. Often the particles just crawl along, and while it might be nice to have a magic button that speeds things up, such a feature — like the notorious Boson — remains elusive. Aside from that, there's really little to complain about with Collider, and a whole lot to like. So while he may not be out there finding a unified theory of everything, Dan does a pretty good job at making a superb casual game.

Thanks for the suggestion, David and Dan!

Many of these will take some tweaking. If at first it doesn't work, try a slightly different position.

Why spoil the last level? If you can't do it, just walk away.

Really enjoying this game... it's certainly not easy, and the atmosphere is great.

Ok I can't figure out level 12 any help?

I love this game. The level design is fantastic. 5 shrooms, baby.

I don't like the puzzle games that depend on timing and nearly pixel-perfect placement. This is one of those.

place the balls in the spokes of the wheels in the following order, from left to right:
medium +
medium +
small +
small -
medium -
dummy green
small + (so that this last small + will roll onto the yellow swith first)

Wow, finished it all but 23, going to wait for someone to help me out now haha.

unanticipated... did you know that originally on the first construction plans the collider was annonced to be operatable by 2002?

The top row should be a + followed by all four green balls, spaced out. The second row from the top will have the - ball. The goal is to get the + ball all the way down and hit both switches at the bottom when it lands and rolls to the target - ball. Then, as the + on the left and green balls on the right fall simultaneously, the + balls get knocked over to the target - ball. Time the - ball in your inventory to hit the top + ball on the left side. It takes a bit of trial and error to get the timing all right. I was having issues with the green balls on the right rolling down too quickly and getting under the + balls on the left.

Thanks to the guest who posted the 23 help. great game.

My only complaint is that you have to place all elements before you start them moving.

Sometimes I just want to place something to see how it'll move and where it'll end up without having to drag and drop six other things.

Many of these will take some tweaking. If at first it doesn't work, try a slightly different position.

Why spoil the last level? If you can't do it, just walk away.

'Aright, sorry for the double post, I don't think I can edit my post. here's the Finishing page:

It shows some congratulations, two slightly angled spring-boards, random plus, negative and green balls and has open sides. There is also a email notification link and an area for feedback.

Observe that there are seven positions. Counting from the left, place the particles as follows:
2: Green
3: -
4: Green
6: +
7: Green
And watch the chain reaction! :)

The mediums will cancel each other out soon enough. The platforms and gears should carry and/or push the large + particles towards the right without letting two of them combine. The little - will either combine with one of the + particles, or fall through the gears and get pushed left.

I've just made a video walkthrough for all levels. I hope it helps:

BTW, i really like this game, it's much harder than other puzzle games on Kongregate. :]

I'm a little disappointed, so the review suggests, a game about collider physics, I think wow, what an idea, what a concept, what a great thing... then I go to the game, and it hasn't any collider physics at all, it just actually a pretty old collision eliminator, there were quite a number of other games just like this already.

In Collider physics, if two things crash, they should create a set of new things, based on the energy. This doesn't do anything at all.

Well I cross fingers, maybe I gonna see a game with collider physics one day, with spiraling electrons and myons.

Awesome game. I wish it were longer.

Writing that walk-through was fun because it's so hard to find a solution that someone else can recreate based on my description. I had someone beta-test the instructions. We found that the speed of your computer sometimes has a big affect on the outcome of the simulation.

The video is a nice idea. Am I the only one who can't access YouTube from the same network where I play Flash games?

This game is AWESOME. The concept is just okay, but the solutions to the puzzles are phenomenally clever. Great production values on top of that, too.

probably not the intended solution, but you can put the minus between the yellow thing, the patterned steel thing, and the radiation line.

Here is the solution for all the levels:

19 is way easier than the spoiler. Just put the balls right on the edges of the ramps next to the top plus and minus (or touching them). Done.

Collider is now available on the iPhone with 56 levels to play and lots of enhancements. The graphics are updated, your progress is automatically saved and there's a new fast-forward button!