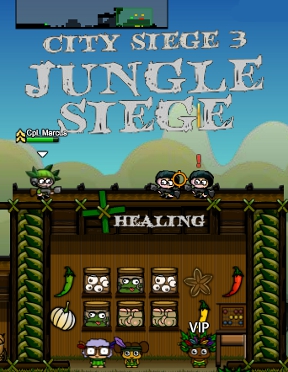 The say war is hell, but presumably that's only if The Podge isn't around, raining its own brand of action-packed platform shooter-yness all over the internets like some sort of glorious gaming Santa Clause. In City Siege 3: Jungle Siege, the follow up to Resort Siege, your little roly-poly headed commandos get in touch with their Rambo sides as they take out the notorious Baddies in jungle environments.

Move your troops safely through each mission, clicking to select one and using the [WASD] or [arrow] keys to move, and the mouse to aim and shoot. Perform well to net stars to upgrade your units, as well as some cha-ching cha-ching to recruit more soldiers. Blast the enemies before they blast you, and try to avoid perforating any civilians. It turns out the army doesn't really think it's funny when you fill out your casualty report with "Looks like they... had a blast." and attach a picture of David Caruso. Yes, even if you include an MP3 with the appropriate sound byte. No, I don't know what their problem is either!

City Siege 3 features all of the action of its predecessors, so fans of the series will feel right at home and will probably welcome the new terrains and work that has been put into balancing your troops. Aiming your weapon still takes some getting used to, as your crosshairs don't always feel like they're much more than a rough guide as to where your bullets might land, and if you take out all the Baddies on a stage before you've rescued everyone, the level will still end abruptly and award you with a puny silver medal instead of the gleaming gold you so rightly deserve. (Who's bitter?) Blowing up your surroundings and watching your combos stack up is still entertaining, however, and if you want a spot of bloodless shooter action City Siege is hard to beat. So get your supplies ready and get to da choppa, because you're off to the jungle. Go on, get all Bear Grylls on their heineys!