If you've ever wanted to be mayor, manager, and a master city planner of your very own town, you might want to give Cities: Skylines, a simulation game for your desktop by Colossal Order a look. When a map is chosen, you're presented with a blank slate, and it's up to you to connect yourself to the outside world and develop the city of your dreams. Most of the initial play is building a basic structure for your town by building roads and zoning them according to need for residential, industry, or business. Once zoned, buildings pop up on their own and citizens begin to move in. You also need to generate electricity and make sure your residents have clean water. Your choices start out limited, but grow as your town grows. If you want to pause while you build, hit the [spacebar]. Don't like what you built? Use the bulldozer tool. Eventually you will generate enough taxes to get in the green (or decide to take out a loan) so you can start expanding and adding other services such as health and death care, police protection, and garbage pick up, among other things. You've also got to be aware of pollution (both environmental and sound), traffic flow, and the happiness of your residents, all of which (and more) can be managed by using the pop-up menu that opens on the top left of the screen. 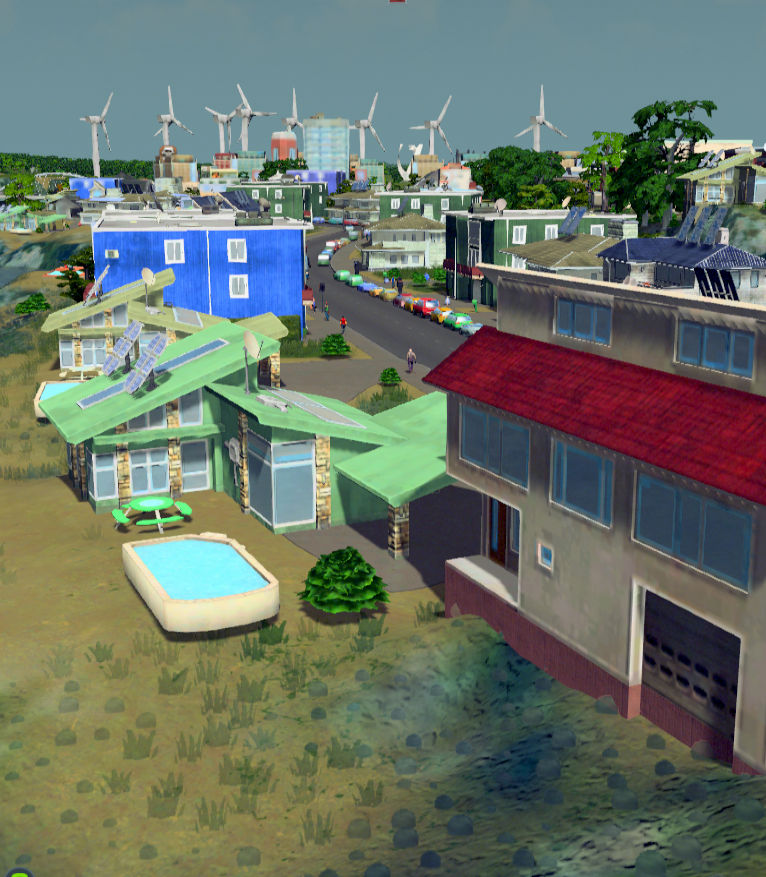 There's no tutorial in the game, which I think would nice. While the tool tips are really helpful, additional tips and tricks, or being able to enable tutorials to learn more about how specific aspects of the game work and affect your town would be helpful. One of the remarkable things about the game is the sheer amount of customization available, much of which is accessed with the district tool. Paint certain areas of town to create a district, which allows you to mark these areas for a specific industry if you've got an abundance of a natural resource, different tax rates, or many other things. Want a district that allows recreational usage of certain substances? Go for it. Want to ban high rise buildings to preserve the view? Do it. While many of these things have only minor affects on gameplay, it's interesting to think of things as a mayor might actually have to, and perhaps generate a bit of extra tax revenue in the process. The least enjoyable aspect of the game for me was figuring out the roads and traffic, which are very important in the long run, as bad traffic can slow down fire response or garbage service. While it's easy to upgrade existing roads, and it's nice to be able to make elevated ones, trying to fit new roads together is a little fiddly. Trying to manage a high traffic intersection, especially if it's after you've built up around it, can require major reconstruction, though for some I'm sure this will be part of the fun. As with many sandbox type games, Skylines can suffer from some aimlessness. You've built a great city: now what? While there are some unlockables when you hit certain milestones, a few scenario maps with specific goals could help with this issue.

The community for Cities: Skylines is really amazing. In the Steam workshop you can download anything from the Ghostbuster's fire station to the Bluth Banana Stand to decorate your town, as well as iconic buildings and statues from around the world. I'd especially recommend grabbing a few good road interchanges to get you going, unless you're a civil engineering genius. There's also in game tools for creating your own roads and decorations (called assets) and a map editor, which are fun to play around with. The size of city you can build is also remarkable. As you play, pieces of surrounding land become available for purchase. This land expansion allows for you to further your export of natural resources, and bring more tourists to your city by connecting trains and building airports, as well as make a truly sprawling metropolis. So if city building is your thing, do a quick check of system requirements, and prepare to lose hours of your time.

i'm just a poor boy from a poor family, so so far i can only watch various lets players play it (Sips' sipsco coast is a really nice city). it looks cool though.