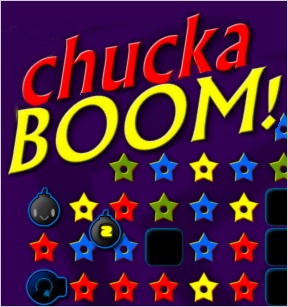 In order to avoid arousing terrorist suspicion from government organizations like the CIA, this introduction paragraph will not jokingly describe the joys of throwing bombs around. Instead, we will discuss ice cream. If you ever go to the ice cream store, try getting a scoop of Berries and Cream on top of a scoop of Whitehouse Cherry. That's my favorite combination so far, with Blueberry Cheesecake on top of Strawberry coming in a close second.

ChuckaBOOM! is a new game from Ninja Doodle (Hardboiled) that makes throwing bombs fun. (D'OH!) The object of each level is to clear a target number of stars, using bombs that go off three (short) seconds after you fling them. Clear enough of the randomly colored Bloo— er, sorry, stars from each level with the limited number of bombs, and you move on to the next level.

Before you start flinging bombs around, some levels offer you some helpful tools that you can drag around the playing field for use as you see fit. Booms are one-time-use stationary bombs that you can strategically place for chain reaction action. Canons [sic] fire beams that can destroy anything in their path, as well as set off other Canons and Booms (double-click to rotate them). Also, any bomb that you fling can be caught again, just in case you need to double-check your angle or force. Doing so causes the timer on the bomb to reset.

Of course, playing a game like this without obstacles to overcome is like putting chocolate sauce on chocolate ice cream. (Sorry, irrelevant simile.) Most levels feature a sort of brick that bombs can't touch, lest they be sent back to the starting position. Later levels introduce semi-transparent bricks, laser traps, teleporters, and even ask you to blow up stars in the dark.

Analysis: If ChuckaBOOM! reminds you of a certain other game that has you throwing darts at balloons, you'd be correct in noting the similarities. However, the time-release twist brings an interesting new element to the game, since you can't just have good aim, but you need to have the right force behind your fling as well.

Unfortunately, the game is fairly easy and a shade on the short side, although perfectionists who want to rock the high score board will find plenty of reason to keep replaying levels. What makes it so easy? You're given a limited number of bombs, but if a bomb never "goes off," you don't lose it. Therefore, rather than being penalized when you hit a block or run into a laser trap, you just get another free shot from the beginning. Because of this, some levels can be completely cleared without a single bomb exploding. If penalties for missed bombs were included, the game's difficulty would certainly increase to a much healthier level, like the precision required in a game of Bloons.

That is, of course, not to say that ChuckaBOOM! is a pushover. Like working with normal bombs or broken ice cream scoops, a careful, precise hand is needed to get the best results. So if you think you're ready for a go, try a game with fun explosive-flinging and a name that's fun to say. (We recommend elongating the third syllable.)

How do you get by the lasers? nothing I do seems to matter... no way around them that I can find.

I thought the berries reference was quite clever, actually.

The lasers seem to have me stuck too :/

Move the bomb just before the laser and wait for the laser to turn off. They take a little bit to recharge between firing, so you can move the bomb through

Won't load for me, keeps timing out in FF.

For some reason, the links aren't working for me...

I just get a blank window.

Thanks for the heads-up on the link, everyone. I've switched the links to the copy at Kongregate.

You said don't look back was hard, yet it was easy. Now you say this game is easy when it is really hard. Especially when you must chuck the bomb through a gap.

The link from the first picture still points to ninja doodle, which still times out.

This is a terrible game! The throwing mechanics are all over the place and gives you no accuracy... but even stranger is that this does not matter as you can just catch a bomb if you mess up, and there is no penalty... even stranger is that all the barriers that are supposed to block you, do not do so, because you can just throw the bomb through them and then catch them the other side, again with no penalty... meaning there is no real variation in the levels... someone really didn't do some playtesting on their game!

Edd, maybe you hit a glitch? Transparent walls can indeed be thrown through, but normal ones will just reset you. Worked fine for me.

artbegotti-- nice review. Isn't it terrible, the atmosphere of paranoia we now live in? I could tell you the humiliation my own mother (a middle aged, blonde Jewish woman) suffered at the airport...

And, of course I know that a lot of perfectly innocent Muslims are being mistreated for looking Middle Eastern. I'm just saying, we've been paranoid, yet sloppy.