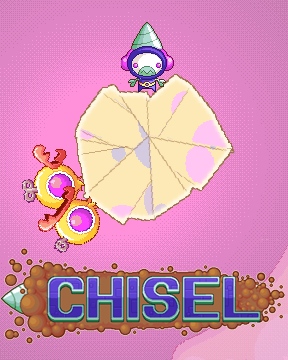 When all the planets in a galaxy need destroying, you will have to apply your head to solve the problem. In the case of Nitrome's new action/puzzle game Chisel, the large drill stuck to your noggin makes that statement pretty literal. Get ready to tear through terra-firma like you have never done before - unless you are a moleman.

Control Chiseller with the [arrow] keys, and drill downwards with the [spacebar]. While some enemies can be destroyed by ramming into them, others are dangerous, and you'll want to learn to tell the difference quickly or those three lives will run out pretty fast. Each planet has a target size to reach, so cut it down as quickly as you can for a high score!

For reasons not entirely motivated, Chiseller has to carve thirty different planets down to their target size. But perhaps it has to do with the strange shapes these heavenly bodies come in. One wants, after all, a uniform and well-adjusted galaxy. Or maybe the strange creatures that inhabit the surface and below require some culling. After all, they are not there for Chiseller's health - in fact, they are quite detrimental to it - so he has to run to a good spot and plunge head first into the ground, tearing straight through the planet and making it a little bit smaller. But, obviously, the smaller the planet gets the harder it becomes to avoid its lethal fauna (or flora - assuming a saw blade swinging from a chain counts as a plant). 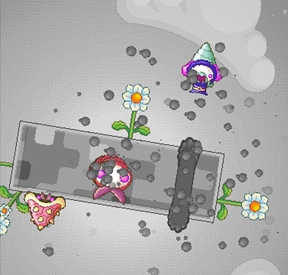 Analysis: Chisel is in its way an inverse of the 'fill the space' genre created by Qix and later copied by the likes of Gals Panic, the Xonix series and the Art Class mini game in Rockstar's console title Bully. In the Qix lineage you have to fill spaces in a rectangular area by drawing lines to create boxes and avoid enemies roaming in the space. Chisel turns the idea around by expecting you to remove space. While in Qix games you killed enemies by enclosing them, in Chisel you ram them with your drill. When this isn't happening, avoidance is the only recipe for survival. And just like Qix, as your play area gets smaller, staying out of the way of bad guys gets harder.

But unlike the former genre, Chisel does not stick to uniform levels. It combines different-shaped planets with interesting enemy types to create a variety of challenges. Some creatures can't be killed by your drill. Others knock against each other and change direction. A few live underground and change their digging direction based on how you chop away rock. One particularly annoying creature actually chases after you, leaving you very little time to get the right angle for your drill.

There is no time limit in Chisel, because the game is all about timing and angle. Sometimes it is just a matter of heading into the right direction, but often you have to choose the perfect launch moment in order to avoid a monster (or perhaps hit and kill it, depending on the type). These two elements are constantly being juggled in the various level designs and the final stage completely focuses both to a fine art. Chiseller only has three lives, so he can be hurt twice before a level is failed: sometimes you have to sacrifice a bit of health to make a level work in your favour, but reckless digging will get you nowhere fast.

There is a scoring mechanism in the form of gems that appear randomly and extra points for killing monsters. So even if you easily master the game, there is an incentive to get these gems, as only a limited number appear on each level. But even if score is the furthest thing from your mind, Chisel is brilliant fun. Typical of Nitrome's games it uses cute retro-pixel graphics displaying creatures that the art department definitely had a ball coming up with. It would be nice for the music to change every few levels, but other than that the only thing left wanting is the sequel hinted at in the end credits.

From what I've played so far, this seems to be another winner from Nitrome. Very addictive, wonderful art, catchy music, and it has the right difficulty, becoming quite hard but not infuriatingly so.

Scratch what I said about infuriatingly hard - level 30 is a killer! Apart from that, still really enjoyed it.

Why do Nitrome games crash my Flash so often? Every one of them.

The ending makes me think of an old game I had on my Amiga 500, "Galactic Invasion". You had to collect five pieces of a missile that would destroy your enemy's solar system. There were some fun messages if you destroyed the wrong one, or stood too close to the blast...

"You fool! You have destroyed your own solar system! And you were in it!"

Those gems are completely useless, and yet I cannot stop risking life and limb to get them. Why must games play on my natural urge to collect shiny things? Whyyyy???

I loved the variation in the planets, especially when you'd come across one shaped like a skull, gear, or banana. Chopping them apart was great fun!

Simple and enjoyable. This one was a hit with my circle of friends. Highly recommended.

How do I know which level I'm on?
If the one with

four sawblades plus a crab on a perfectly round purple planet

is the last, I might try to finish it, but if it's not even the "killer" Alex mentioned, not a chance.
Great game. Even though the protagonist isn't what you would call cute, by the time you've beaten a couple of even uglier monsters together, you're best buddies forever. Well, at least until you run into a level where you have to say, "you're alone there, mate".

It's really all about timing. If you time it right, you should be able to get two shots straight through without getting hurt. After that you can get hurt on your next two shots with your two heart buffer and then win. Of course, when I did it I ended up getting hurt twice earlier and then just getting incredibly lucky on my last shot.

The last level isn't that tough.

Follow the blades to the left. Time your shot so that you drill right after you pass one (just after it goes into the planet). If you time it right, you can keep the crab thing behind you and get all shots done without hitting anything.

There is a bit of luck in it, but that is one of the easier ones IMO.

@Regy Rusty: Thanks for your answer! I'll have a go then.

never seen a game so desperately in need of a jump button.

Got to level 21 before I died several times and got bored. (I died many times before, but didn't get bored enough to quit.) It's alright, I guess - but you need to be able to jump.

This is one of the greatest things I've seen for a long time, and definitely the best game from nitrome.

Why? Because it is really a new basic game concept I've not seen so far.

Finished it.. Yay!
Some levels required patience and luck, but its a new one to put your mind to. Especially when messing with fruit-shaped planets.

I can't play the game, it seems. The area where the game should be is just white.

Does this remind anyone of drill mario in super mario galaxy 2?

I beat an annoying crab level and when I won a crab hit me and exploded XD!!!/

Also, big tip:
dig little ledges. You know? Rough edges. Then stand on it and dig! (He may refuse to dig.)

I did most of Level 11 without killing any monsters. The planet was really small when I killed all three monsters in one drill.

Help, try to lose just one life by killing the Boombot, and then use a perfect obtuse angle to destroy two bolts in one drill, killing the enemies with just three drills.

Oh sorry, I did most of Level 10 without killing any monsters, and on Level 12, Help, try to drill in an area that the caterpillar isn't in.

Level 15 is easy! I only lost one life and I was more then halfway through the planet.

Hahaha, Level 21 is about timing. Stay in one area until you drill. When the dig-bots leave the area you're in, drill with good timing.

Parts of this game are based on 2 other nitrome games

Excellent game. Would love to see a part two! :)

You got lucky drez, they're making a second one :D