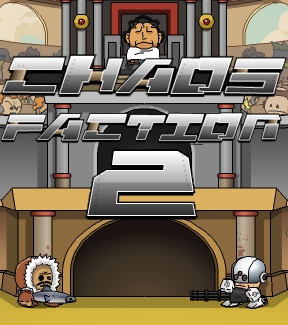 Imagine, if you will, a world torn straight from the action-packed sketches doodled in a third-grader's margins. Knights fighting robots, aliens dueling vampires... the craziest, unlikeliest match-ups, set against one another solely for the fact that, deep down inside, your inner child knows that this is the stuff of awesome. Welcome to Chaos Faction 2, the bombastic brawlfest from Dissolute Productions.

While controls vary on the mode and how many players there are, there's a standardized set for the solo player: [arrow] keys for movement, [down] to activate your shield, and the [Z] and [X] keys to let your fists or feet do the talking, respectively. There're other more advanced techniques, like evasive maneuvers and aerial acrobatics, which can be viewed via in-game help screens. Picking up items is as easy as walking into them, and you can use them just as easily with the attack buttons. Who knew that uproarious mayhem was so intuitive?

There's quite a bit to see; while the single player campaign mode can probably be trounced in a single sitting (with a couple of blood-boiling, endgame exceptions), it's all about the trendy character parts and gear that you unlock, which can be carried over into the deathmatch mode. It's from there that you can challenge a friend as awesome-obsessed as you are to single combat. Or, throw some AI players in there to make things interesting. Make teams, set time limits, and even account to have a magical toilet plunger appear for players to clamor over. Like I said, it's all about the awesome. 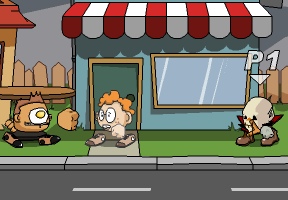 Analysis: A lot of what this game stands for is that distilled, unadulterated, italicized awesome factor. Your personal avatar is customizable right down to their eyeballs, with dozens of parts salvaged from defeated foes. There's a trove of wacky items, ranging from boxing gloves and blowpipes to teleporter rays and localized black holes. Even a level editor is there for your meddling amusement.

The trouble is that, at times, the action can actually get a bit too hyperactive. There will be times when you're knocked off the stage and you're not entirely sure why. The melee combat, while wearing the trappings of complexity, usually seems to boil down to mashing. For a game that seems to draw a lot of inspiration from a certain source, there are oddly jarring changes made. You can jump up through platforms, but not drop down through them, which makes navigating some stages an endeavor. Items also always overpower unarmed attacks by about three to one.

That said, the raw psyche of this game isn't about creating a "balanced fighting game" where the outcome's always fair. It's clear that the heart that beats within this game is an awesome engine, constructed for the purpose of powering a game where a polar bear can throw ninja stars at a pirate with a flamethrower. The cartoony animation meshes well with the game's zany atmosphere, and there's enough level-specific music that you'll almost never need to hear a loop. Even if the controls are sometimes loose and the mechanics don't always seem to give matches to the most skilled combatants, you can't help but smile at the wacky, slapstick charm when you see those doodles in the margins. Hey, it's not your fault. Awesome is a tough emotion to hide.

great game, can't believe i never heard or played the first. but too bad im stuck on the last level.

this is probably the last game I ever expected to see as sequel of. the original was fun, but this one doesn't really improve the game much. the inability to fall through platforms and the friendly fire in the campaign ruin it for me though.

This game was truly awful. It was really hard to track what was going on and as you say, a lot of the time you were dead for no apparent reason. Lack of consistency and any kind of 'feel' from the game make it a big no for me.

umm how do I beat the scaffolding challenge and the robot challenge, each in zone 3

Does anybody know how to get Up And Away and Lift Off! achievents? The ones where you must knock your opponent to stratosphere and space. I've got everything else except those two.

THIS IS SO FREAKING UNFAIR!!!
I've been checking the progress on disoluteproductions.com for a MONTH and then I wait 2 days and it come out!!! GRRR.

I'm surprised that no one has mentioned that this game is basically a clone of Super Smash Brothers... If you've played that a bunch, tracking the action isn't that hard. I have thoroughly enjoyed it.

ive completed the game in seven hours and i only need one acievment how do you get the achivement zero gravity?

wow this game is awesome i got every achievement, avatar part and i play on it with my brother all the time. i hope there will be a 3rd !!!

You need to go off screen and recover. It's easily done with the gun that lets you change places with your opponent. Just jump off screen and use it.

uhm i need help with the pacifist achievement what campaign level should i do it on? and how? i have every other achievement too.

For the pacifist achievement play the

Lava Palaver level, and just run away from all the baddies. That's what worked for me, anyways.

controls were way too frustrating

does anyone here know how to get the

now I got all the achievements.
ill show the characters that you get

lol I have a character code

To Dragonfang:
I've been waiting for this game since almost one year.. -_-"

I have played both Super Smash Brothers Brawl and Melee, this game is a clone, but absolutely awful in comparison. Gives no real controls as there are obviously a bunch of combos and you can go flying off the map for a reason never explained. Truly awful.

play this, it's awsome

how do you get somone into outer space P.S. THIS GAME IS AWESOME!!!!

character code AND i have no idea how to send people to space or whatever for the achievement...post would be nice.

How do you unlock 5x Damage? And how do get lift off and the other one?

x2 damage is achieved by gaining Immortal. Once this is activated in the "more options" settings in Deathmatch hit an enemy with a charged or rage hit. This will earn you Up and Away and unlock x5 damage. Activate this and use charged or rage hit like before to get Lift Off.

i have named him perfect being 1

Super game I finished all the levels but unluckily I haven't unlocked all the achievements (only 2 more!)

where do you put the codes!?

how do you import you character?

This is my players codes:

CHARACTERS YOU WILL LOVE TO PLAY WITH... ;D

My characters might not look too great, but they're unique from what I know and can tell... except for the last one... (second one was based on a movie, but with my own little twist added on.)

where is the more options button?

for a really tough character see above

you must have rage mode and x5 or x2 damage on then you must do an upwards punch to knock someone in space.

These are my main, they are legacy ranked.
Try them there really cool.BTW i have all achievements.

Hi all! Does anyone need help regarding Chaos Faction 2? I can supply info for everything except for 2 achivements which are Survivor(Get a score of 10,000 or higher in Survival mode) and Fantastic 5(Get a 5x multikill) because I have not done those yet.

this is the best game ever

Has a really cool name [face is cool too :)]

If you have any problems about this game please tell me !

i completed the whole game already!

He is one of the creatures. Shoot fire out of control! Use it abundantly. :P

And btw, for those people that don't know how to post codes and use codes:
1) Posting codes: Go to campaign, deathmatch, or survival.
2) Click on edit player.
3) Edit the dude however you want.
4) Click "share" while you're still in the editing screen.
5) Copy the code and paste it here!

what is the
plunger

What you need to win this:

I HOPE THIS HELPED!!!

PS:if u have questions, write it! I am complete this game many times.

how do you put in the characters tht are weird?

Hey If you want some awesome buddies in the game then I`ll be posting new codes every week! here are the buddies (they know each other in the game!):

I can complete the whole game in less then a hour. It's not that hard actually.

Can anyone tell me what is their record on Survival?

my character code is

how do you use the character code?

each is awesome in there own way. try them out.

this my level go to level editor click import :

Punk of the Future

Hello team of jayisgames, i want to thank you for publishing such great games as Chaos Faction 2. Please, keep up the good work and make sure you review and add some more tower defense flash games.