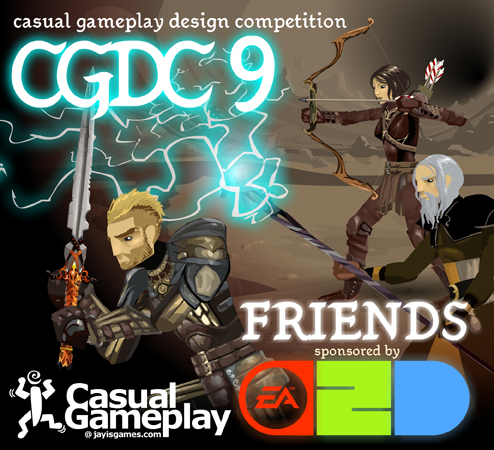 All entries are available to play immediately on the competition page. There is a place to enter comments for each game, so please use each respective thread to leave your kind feedback and constructive criticisms for the game authors.

Although you can find all the games on the official CGDC9 competition page, following is a list of the entries and direct links to each one:


The competition period will span 3 weeks, and we will announce the winners of the competition at that time. If you wish to be a judge, please read the rules and sign up here.

Please help us spread word about the competition and all the creative entries we have once again to share with the world. Use Twitter, use Facebook, Stumble Upon, Reddit, Digg, use any means at your disposal to share the competition games with your friends and family.

Thanks to everyone for your support, and especially to our sponsors for making this competition possible: EA2D and Casual Gameplay. Please visit them and show your support!

GO TO THE COMPETITION PAGE

At last this is going to be great!

Not working for me. After I download the presentation and sponsors I can not see the games. Just a black rectangle.

[Sounds like something is interfering with the Javascript communciations. The competition page has been successfully tested in all the major browsers on both Windows and Mac platforms. Make sure you have Javascript enabled and that any ad blockers are disabled. If that doesn't work, please post your OS/browser/Flash Player versions so we can try to reproduce what you're seeing. -Jay]

I was excited to see these up! My favorites, by a huge margin I'm afraid, are: Johnny Why 2 and But that was yesterday... Especially the latter. Ooohhh...especially the latter!! So beautiful, moving and different. The music was great too. But then, I'm also a sucker for

anything with a cute brown dog in it - even more of a sucker am I when he looks amazingly like mine!

Didn't make a game this time around. I couldn't think of any ideas for the theme and was busy with school,though a did make an unrelated game.

Is that Zebulon as in one of the sons of Jacob?

I don't get the love for "But that was yesterday." I can't get past falling between buildings. Tedious.
I liked "Johnny Why 2."

Is there no way to change your vote? Since some games will be updated, or you can be convinced to give a game another shot because it doesn't really get going until Level 6 and you gave up in frustration at Level 4.... It'd be nice if clicking on the rating changed your vote, instead of just telling you you've already voted.

@Tahnan: I agree that would be a nice feature, but the rating widget does not support changing votes at this time.

You may, however, have a voice in the competition outcome by becoming a judge. When judging entries, only your most recent score for each game is counted toward the final results.

But that was [yesterday]... is clearly a mile ahead of the rest in originality, beauty of concept, and polish. All the other games feel like they need a lot more touching up and some sweeping for bugs.

Guys, art games are not everything. I found [Yesterday] boring because you could barely do anything and it wasn't fun. I play a game to be entertained, not to interpretate something 5 different ways!

However, Johnny Why 2 is awesome and deserved at least an honorable mention.

Hm. "Monsterz: Chainz of Friends" is using both the graphics and music (and name) of Monsterz (http://sam.zoy.org/monsterz/). The license of that game allows people to do that, so Jean Privat isn't technically doing anything wrong, but it rubs me the wrong way that he's not even crediting the original authors, and has entered the game for a contest. At least he changed the gameplay.

[Thank you for pointing this out. -Jay]

I really, really wish I had entered.

I had a great idea, and made some good progress, but I couldn't finish in time between school and work D:

It's as usual an impressive set of efforts for the competition. A few stood out for me.

Jay Needs Friends. This had the feel of an old-school arcade game, from the color palette and stripped down retro-design to the frenetic action. The difficulty ramped up considerably, but it felt challenging rather than unfair. I like the change in rules midway through; it takes the same mechanics and makes it feel much different. Very nice.

But that was Yesterday. I love art games, perhaps because I've played enough video games over the past couple of decades that seeing something new is refreshing and exciting to me. It wasn't perfect (I found parts a touch slow, and think that some of the platforming sequences were too long given the lack of any real challenge), but it did a great job of telling a story.

Fiends. I thought this was a neat little puzzle game, even if a little bit easy.

FrankenFriend seemed a little buggy, but I liked the idea and wish I could get it to work.

A couple didn't quite work.

Groundhog Day didn't seem to have anything to say about the theme, and felt a bit incomplete. The lack of item descriptions threw me, as I wasn't even always sure what I was carrying.

Break Them Out was a competent Arkanoids/Brakeout/brickbreaker clone, but didn't seem to have anything to do with the theme; dressing powerups like people, stuffing them in bricks, and calling them "friends" doesn't make a whole lot of sense. I did like the idea of collecting ore from the broken bricks AND sometimes having something to dodge. I also liked the ability to re-play levels for a higher score.

---------------
After running through the games yesterday, the one I want to come back toto try and finish is Jay Needs Friends. Very nice overall though. Can't wait for the next contest!

Can I be blunt and say that the overall quality is very disappointing, and that the game that's clearly the most polished has very little actual gameplay.

I guess I'm surprised that the generous time limit and prize money doesn't seem to have tempted more of the better designers out there.

[I am actually very pleased with the competition this time around and consider it another success as all our competitions have been. The 8-week time frame is a very short period of time to create a complete and polished game, and we're only 3 days into a 3-week competition in which the game authors are allowed to make bug fixes and updates based on the feedback they're getting. Have you tried making any games in such a short period? I recommend that you realign your expectations when it comes to a game design competition with a short development period. You may just find yourself enjoying the games more. -Jay]

But that was [yesterday] is very, very good. It's not a game that you have to interpret or where you need to guess what things stand for - if you play the whole thing there is no way you can't get the point. And it's an excellent point, and so very well made. Plus it's beautiful, the artwork and design of it is just lovely.

[Please leave your comments for individual games on the competition page under the heading for that respective game. More people, especially the game authors, are more likely to see it. Thank you. -Jay]

Strongly disagree with rc. This is one of my favorite crops of games to date.

I didn't expect people to agree with my opinion but still thought it worthwhile to throw it out there. I've been a programmer for over 20 years so I think I have some idea of what can be achieved in 8 weeks, and I'd add that Ludum Dare seems to throw up some surprises in only 48 hours.

To me the earlier competitions got a lot more attention from established developers.

The problem, RC, is that you didn't actually say anything, aside from "I don't like them". That's not criticism; it's whining.

I already listed several games that I found impressive, and even had reasons for liking them; others have done the same.

Hi Jay, have you thought of having a separate judging category where the developers choose their favorites? I can imagine the results would be different from the players' picks or the judges picks.

I imagine players care more about fun, judges more about conforming to the competition guidelines, and developers more about game design as a discipline as well as about technical prowess.

I would love to see each of the 15 developers select 2 games (other than their own) as their favorites and a brief note about why they like them.

@CowboyRobot: I think that's a great idea. I'll try to create a developers choice award for our next CGDC, which will likely be next summer time frame.

@rc: Since our very first competition winner, Clack, almost every CGDC has resulted in a winning game by someone who was virtually unknown before, not from an "established" developer.

Clack, Sprout, Gateway, Gimme Friction Baby, The Tall Stump, and Small Worlds were all previous winners and all from relatively unknown developers at the time of their winning.

The CGDC has proven over the years to be a platform with which relatively unknown developers can jump-start their careers. I am extremely happy with what we do and the opportunity it presents, as well as with the entries submitted each and every time. And CGDC9 is looking to be no exception.

I was curious to hear what everyone's favorite games are so far. Some people have posted mini-reviews of the games, but I'd like to get a better idea of which games are most popular. I'll start:

Oh, and if anyone's concerned about whether or not that would constitute giving certain games an unfair advantage, I checked with Jay before posting my question, and he says it shouldn't be a problem! :D

Jay, I'm having trouble getting the contest page to open today. Since everything else at JIG opens right up with no problem, I thought I'd better report it.

[I'm not seeing any trouble with the competition page. What sort of trouble are you getting? -Jay]