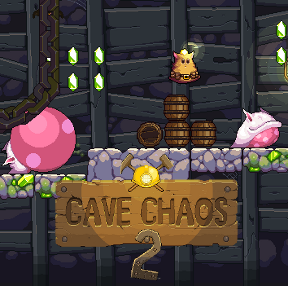 Pop culture has taught us that caves are horrible places, literally packed to the brim with horrifying monsters, bat poop, and certain other hazards. Nitrome's first spelunking session was no walk in the park, and now things are getting even trickier with Cave Chaos 2, a platforming challenge where the hazards are bigger and the monsters are grosser.

Use the [WASD] or [arrow] keys to guide your furry little miner through a series of increasingly elaborate caverns chock full of explosives, beasts, minecarts, and crumbling platforms. As you move, new platforms will fly up for you, carried by helpful bats. Certain levels will tempt you with golden power-ups, like the double-jump, or a butt-bash that will allow you to crush enemies beneath your mighty hindquarters, or even the ability to "glide"... which should here be translated as "flail frantically around in the air with your feet like a Yoshi". Move with caution, but not with slowness, since the terrain will gradually crumble away to nothingness behind you. Most levels have at least one checkpoint you can activate, however, so even if your nice, shiny rocket-propelled minecart takes you on a nosedive into a cliff, you won't have to start the whole level over.

Cave Chaos 2 definitely lives up to its name, with frantic, chaotic levels that are packed full of action and surprises. There is a lot going on here, and all of it rendered absolutely beautifully. The downside is that there are times when the game expects you to take leaps of faith, and there are also times when it doesn't always seem like platforms trigger when they should which can lead to a few frustrating reloads. As a result, the game might require a bit too much trial-and-error for some players, but those of you with nerves of steel and twitchy fingers will prevail as long as you balance cautiousness with expediency. If you played the original, you'll definitely appreciate all the new hazards and elements here, from the addition of checkpoints to the new monsters and other environmental obstacles that overall makes it feel a lot more varied, but perhaps a lot slower, than its predecessor. So the only question remains... are you miner enough?!

I have played the first part of this game which i loved a lot.

Infact this make me seriously nostalgic as I had great time playing first game with my brother..I miss that time since we are at different places now.

On gameplay, this one is slower and un-engaging compared to previous one, hence 3 stars..still a two-player game is always welcome....

Their games are laggy, they are draconian about firefox and and add bloc (yes I do disable add block here on JIG but every time I do end up else where I get something bad, just random maybe but it for sure happens). So they make you wait to load the game and then it is laggy, and they have no right to force me to watch their laggy adds either.

I have said before I would pay a sub to JiG .. but Nitrome can go burn as far as I am concerned. Their attitude makes me want to kick them out of the window .. like those rmt monsters in the mmorpg world. (I did love the FTP discussion link today by the way)

Just my 2cp vent on Nitrome..

Ehh....this game was too short, especially for a sequel, way too easy for a nitrome game, the jump-cart only appeared once, the boss was lame, and the level design was uninspiring. I like the old nitrome better.

I usually love Nitrome, but this is not one of their best games. The titles come in too slow and I don't like how they colored this one in comparison to the first. Also, the levels aren't challenging enough. Definitely isn't as good as the first (which I enjoyed). This game was a letdown.

I have to admit, this was one of the sequels I was kind of disappointed in. Don't get me wrong; it was a good game and all, it just seemed to lose the element of "chaos" which I was really expecting for this sequel. I agree with the overall speed of the of the game though; there were some moments where the bats were coming at a slow pace, which was quite the change from the first Cave Chaos. As for the falling platforms, give them some time to fully come down before jumping on them.
There were some good things about the game, though. I enjoyed the touched-up graphics and a few of the levels that were quite fun. Another good thing was the fact that once a miner got a power up, they wouldn't be able to get that same power up again. This was a major problem for Nitromians like me who play multiplayer games in multiplayer mode. My sister would always be the miner in front with the first Cave Chaos and she would be the one who would take all the power ups, making it really frustrating.

I was surprised to see how many enemies didn't make their appearances in this sequel as well. That worm disgusted me. Most of the enemies were actually quite beneficial to the game, so it was interesting to know the boundaries between when an enemy's attack became helpful and when it was harmful.

Overall, I felt this was just a really laid back Nitrome game. I played it with my sister for about an hour and we had already beaten it. I was utterly shocked at how quick it was. Nitrome must have run into some pretty serious issues when making this game if they had to tone it down so much.

It looks very nice and plays solidly, but, maybe it's just me this morning, but this game just feels slow and sluggish and had me annoyed after the first few seconds having to wait each step before a block appears and then slooowly progressing in the level.

It was ok.
My biggest problem was that they left out the [email protected] music from the original, so they get 0 stars. >:(