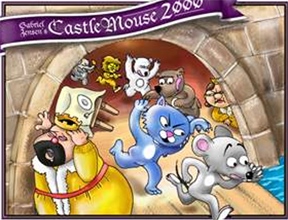 Here at JayIsGames, we try to bring you the best new browser games every single day. We've been doing so since 2003, which is about a million years in internet time. Jig Interactive's Castlemouse came out in 2001, so we couldn't really review it when it was first released. We're making up for that now. Do a barrel roll and hop into a time warp, it's time for some chain reaction puzzle fun, 2001 style!

Looks like there's a mouse in the castle! It's okay, though, everybody who's ever watched a cartoon knows that all you have to do to get rid of mice is buy a cat! Put the cat next to the mouse and it'll go running in the opposite direction. The real problem comes when the cat refuses to get close enough to the mouse to get rid of it. Then you've got to add more and more animals, until eventually you have elephants chasing lions chasing bears, and it starts to look less like a castle and more like a zoo run by Rube Goldberg.

The puzzles get gradually more difficult as you advance, but they can be tweaked and restarted as often as you like. The timer is constantly running, however, so you'll want to figure out the solutions as quickly as possible. Fortunately, hints have been provided for when you get stuck (and believe me, you WILL get stuck), but using them adds time on to your total score, so you'll want to do so as infrequently as possible. You can also skip the hints entirely and view the solution, but doing so will disable your timer for the remainder of the game. And what fun would that be? 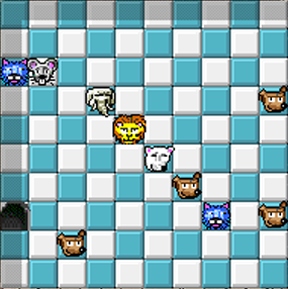 The real appeal of Castlemouse, and the reason that it's stayed around for so long, is in the gameplay. It's a simple premise that can be picked up quickly, but actually mastering the game is a whole different story. The puzzles start simple, but as you progress, more and more animals are added, and it'll take everything you've got to get that mouse into the hole. But don't burn your brain out too quickly, there are a total of 150 levels, with each one more difficult than the last. The ability to skip levels is a much-appreciated feature, so if you get stuck on one level, you can always move on and come back to it later. Old or not, Castlemouse is a fantastic example of what puzzle games should be. It's long, challenging, and fun enough to keep you coming back for another 10 years.

Mac OS X users take note: Unfortunately, the game is so old that it uses code that breaks the latest Shockwave plug-in for Mac. However, we have been successful playing on a Mac using Safari running in Rosetta mode. Check our Support page for information on how to do that.

Hooray! I've been waiting for this to get reviewed. ^.^

I remember playing this while counting down to 2002. Back in elementary school. Like 10 years ago...

This game crashes my browser every time I attempt to open it. Shockwave is installed and working. Browser is one of the best (Camino for Mac). No clue why it's doing this.

If you're feeling old, that must make me ancient! Ten years ago I already had my B.S.

I'm having the same problem as dsrtrosy. I'm using Firefox on a Mac.

Yeah, it's crashing on my Mac as well in both Firefox and Safari. Too bad - it looks like fun.

Oh dear. Sounds like this game is borked for Macs! Thanks for letting us know folks, I volunteer Jerrad for a thousand muchas smoochas for each of you in penance. I'll update the tags accordingly!

And in case you don't know,

It's the one with the lion in the bottom right corner with the two polar bears near it.

I hate resorting to the "Solution" button...

I'm using Vista + Firefox with the latest version of Shockwave installed. Each time I try to run this game the website tries to install Shockwave, then Firefox shuts down to prevent "data execution".

Do I smell a "Time-travel Tuesday"?

Crashing on Windows 7 and FireFox too.

I remember this game!
Man, that was so long ago. Time really flies.

Well, actually... I'm using Firefox on a Mac, and it has crashed the browser twice. However, if you quickly start the game (skipping the opening), you can avoid having it crash.

On that beginning screen, where it displays the "Start" button to you while some kingly dude is talking (the first thing he says is "Welcome to CastleMouse"), if you click Start before he gets too far into his speech, your browser (hopefully) shouldn't crash. It worked for me, anyway.

As far as the game itself, it's a simple mechanic, but it can get more complicated as you try to think out how things will work, and how to time things right. I played a couple of levels - they were pretty easy - and then I hit one that I couldn't figure out, so I stopped for the time being.

Wow! I've not thought about this game in a while, and I never could remember what it was called. I remember playing this a long time ago (along with Mario Teaches Typing, which was the first video game I ever played). Thanks for giving me an answer to something that's been bugging me FOREVER!

(and PS if anyone knows where to get Mario Teaches Typing for OSX, I'd really appreciate it!)

This is a perfect example of a "Just one more level" game. Kinda like a bowl of snacks - you can't stop with just one little bite.

Now I want to see someone post a complete walkthrough. :P

This is basically adorable. Thanks.

The game won't load. It's just a black screen... any ideas why?

Do you have Shockwave installed?

Oh man, I've been looking for this game for a long time. I remember playing it in my childhood (I'm sad it won't work on mac)

Meh. It tells me I need a plug-in, and then it goes, "Plug-in? What plug-in?" I'm using Firefox 3.0.17 for Ubuntu. So even if I were to manually track down the needed plug-in, I have no idea what it is.

[There is no Shockwave plug-in for Linux, sorry. -Jay]

I was able to get this game to play by running Safari in Rosetta mode. Check our Support page for information on how to do that.

Vista + Firefox, no luck :( I've installed the plugin, but it keeps telling me that I still need to install it..

hah, power of posting.. it crashed firefox, then when I restarted it, the game works..