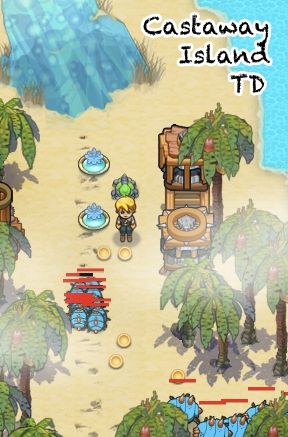 People love the Castaway series, and there's a lot to love. That plucky protagonist with his spiky hair. His adorable pets. The funky tropical locale and seafaring music. Tower defense fans looked on in envy. Well envy no more, because Likwid has come to your rescue with Castaway Island TD.

Borrowing some controls from the action rpg originals, you actually have to move your character around with the [WASD] or [arrow] keys and interact with potential tower slots through the [spacebar], using the mouse to select which option you want. You also have to move around yourself to collect the coins that enemies leave behind when they die. In addition to attacking enemies with towers, you can also lay traps for them, either by clicking on the desired trap in the lower right or by hitting hotkeys [1] through [8]. Traps drop right where you are. The game includes the signature pet feature of the earlier games. You permanently pick one of three pets to help you, and they act automatically. The one big drawback is if you're hunting for a "speed up" button. There isn't one.

This is no mere rushed attempt to exploit a franchise by exporting it to another genre all slapdash like. The makers clearly put some thought into making this its own game, and they understand what the genre's fans like. So you can stand proud, tower defense fans. You have a Castaway game of your very own!

In regards to pet selection

Getting all the dropped coins isn't exactly difficult, and grounding flying monsters is possible by another method later in the game... but there's only one way to regen mana for traps, and that is choosing Pixie as your pet. Pixie is STRONGLY recommended for your first playthrough.

I love TDs, but I was a little frustrated by the interface here. The fact that it's in the whatchacallit opposite-of-top-down view means that palm trees often block your view of your other towers. I didn't notice anything that indicated that a tower was ready to be upgraded, other than clicking on the tower to see if you could. They set up keyboard shortcuts for traps, but the actual amount of mana you have left, and the mana cost of a trap, can only be seen if you mouse over the lower right corner. There just seemed to be a lot of little annoyances like this.

Oh, wait, correction on the previous comment: perhaps "upgradeable" and "experience" are unrelated, and the latter affects only how many gems a tower can hold? If so, that wasn't clear, but you can replace the previous complaint with "and there's no way to speed up the extremely slow text".

Re: upgrades.
You can upgrade a tower if you have enough gold.
Or you can wait for a tower's own experience to upgrade it.
Upgrades increase range, shooting rate, and adds one more gem slot.
It was easiest for me to just walk over to the tower for maintenance, which to me was part of the challenge, your mileage may vary.

Disagree, I loved the third pet. It means you don't have to

build so many flying-only towers, just stand next to the powered up ground-based towers and bring them down for smashing.

I haven't played hard, but I love the graphics and the extra challenge of having to walk around and maintain things; and normal mode comes in bite-sized pieces, which helps when you don't have much time to play TD. Mana control for traps was the only downer for me.

Oh and you can start waves early by clicking the double arrow / fast-forward on the bottom left where the wave preview bar is. Speeding up is just going to kill your flash and since you're walking from place to place, you have just enough time to get around at normal speed.

There's quite a few complaints on forums about how the first "boss" level in this game is punishingly difficult. Defeating it is a mix of picking the correct skill points, the correct pet, selling towers and just plain luck.

I started normal mode, and finished all the levels with 3 stars and mostly no difficulty at all. Until I got to the first boss, against which I lost a dozen times in a row. I might be missing something...

For the first boss, you need a bit of luck.

I finished it by

Building a mist tower at the entrance, then build some arrow tower near the crystal. On the way, I put some traps (ice mainly) and then, when i saw which lane it took, I sold my first towers and build some more at the back. And I also switch all my points into the gems section in order to get some. If you get the ice one, it gets easier to kill the boss... But seriously, took me several tries! Good luck!

This is a terribly unbalanced game. The first 5 levels are very easy and give the player a comfortable way to ease in to the particulars of the game, then the first boss happens. I don't know how this passed through whatever testing this game has gotten, but to much randomness is involved in taking it down. 15 times now I have come within 1-3 hits worth of damage from taking it out. All it would have taken is a couple more crits or for those damned snakes to have dropped one gem or NOT to have, yet again, dropped one coin each instead of three. To reiterate, to beat the FIRST boss, you luck with getting gems, luck with getting, and luck in achieving crits.

I swear, 'Likwid' is fastly becoming synonymous with games to big for the programmers britches.

For anyone still having problems with the first boss on normal difficulty, this setup has worked for me on 6 out of 6 tries where the boss has taken the right branch of the path:

Select the pixie (mana regen) pet at the end of the first level. Before the first boss level, reshuffle your skill points into "I love gold", with maybe one point in "power walker" if you have slow reflexes, or one point in "gem smith" if you prefer.

Buy a mist tower at one corner of the entrance, using the tree closest to the corner. Put a single poison trap at the point where the path branches, to make sure you kill all the snakes in the first wave and get all their gold. Don't use the "fast forward" to summon the snakes until you've regenerated all your mana.

Again, don't use the "fast forward" unless your mana gets to 100% before the boss shows up. If you're lucky, you may be able to place one more ice trap while the boss is still in range of the mist tower (it is very slow, so you can safely walk in front of it to place a trap).

If the boss takes the branch turning away from the tower (50% chance), you will most likely have to restart the level. If it takes the branch you've set up, wait on the mist tower and sell it as soon as the boss is out of range (if you've been lucky with gems, it may die before this happens). Don't bother selling the spear tower, it just wastes time.

Run to the point where the paths rejoin, and buy a boulder tower on the corner that covers the branch that the boss is on, and then one next to it on the side closer to the crystal. You should have enough mana to put one last trap on the path just after the branches rejoin; preferably ice, but do a poison trap if that's all you can afford. And that should do it.

I can't seem to work out how to get the "8 traps" achievement. Even placing one of each trap consecutively didn't trigger it.

The coin-collecting pet is good for beginners, particularly on some levels where collecting gems seriously eats in to your time.

i didnt have any problems with the first boss when it was on normal. i used the spear towers and put 4 at the entrance and then when i git enough i put some in the back and put boulders in between. i also didnt use traps

can someone tell me how to beat puff no more (weapons, fighting style)? i cannot beat him!! its so frustrating

8 Traps achievement eludes me as well. I laid and had triggered 8 different traps and 8 of the same traps, but still could not ever get the achievement. I even tried to lay 8 on the map in untriggered state without avail. Smells like a bug to me.

I only see a white screen! What is wrong?

Hmmmm,...I am almost done with the game on normal mode. I used 8 of the same traps to earn the achievement. In this case the poison trap as it was the cheapest. I am having trouble on the third to last level. Does anybody have any strategy tips that might help?

I didn't have so much trouble with the first boss.

Gotta say... if the first boss is what I'm thinking of (big blue thing that comes and you see "BOSS ALERT!", then that's really simple... here's what I had when I beat it, did on first try:

placed only boulder and spear towers during whole level (since I had grounding pet thing), upgraded first few towers with gems (shock, fire, and ice), although that had part to do with luck and part with me picking the gem skill), and after boss took a path I sold other towers and built 1 fog to finish off. didn't even use any traps.

974 Views
0 Comments
chrpa— Jayisgames needs your help to continue providing quality content. Click for details Welcome to Mobile Monday! In the first game by Johnkichi (Masayuki Takagi) is your first objective to open the door leading outside, and cope with an emergency...  ...

6,213 Views
3 Comments
chrpa— Jayisgames needs your help to continue providing quality content. Click for details This Friday we've got a brand new escape by Ichima Coffeedo and it's a big one! Not a remake of an older flash game - it's new, though...  ...

5,660 Views
24 Comments
chrpa— Jayisgames needs your help to continue providing quality content. Click for details Welcome to Weekday Puzzle! The first game with letters by rubyleehs is fun and you can spend A LOT of time with it - notice, that it...  ...

3,244 Views
6 Comments
chrpa— Jayisgames needs your help to continue providing quality content. Click for details Hi, the week is over and the newest Weekday Escape here! This week we have two Amajeto's games and both are very nice and satisfying. Good and...  ...