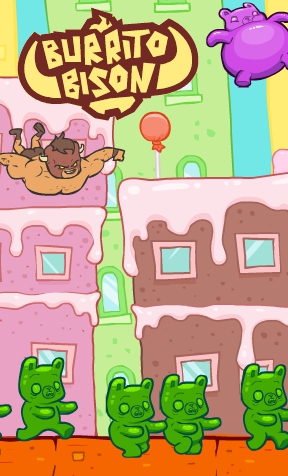 Launch games of all stripes have a pretty narrow premise; you launch some helpless critter or contraption for distance, buying upgrades to gradually improve your chances for ultimate success on later attempts. There aren't many ways to dress up this concept, so to stand out, I surmise, new launch titles are going to have to push the envelope thematically. Exhibit A is
Burrito Bison from Juicy Beast, in which you play a grim, roided-out minotaur in spandex briefs, kidnapped by the fascist oligarchs of Candyland to fight in their gladatorial combats, and resolved to launch himself with the combat ring's elastic ropes and propel himself to freedom, via grit, rocket shorts, and the gummi, pliable sproinginess of Candyland's fleeing citizenry. Top that, future launch game developers and purveyors of the bizarre!

You begin each launch attempt in the ring. Follow the spinning power gage at the top of the screen to determine the best time to launch, then click your mouse. Monitor your speed with the gage at the bottom left corner of the screen as you bounce and fly towards exodus. You will slow down if you hit solid ground or heavily-armored Candy-cops instead of squishy gummi-folk; to prevent this, click again to use one of your limited number of body-slams, which will recharge as you squash the panicked mobs of Candyland. Other power-ups will appear on the screen that will aid you in your flight for freedom, and you can purchase other power-ups and upgrades between launch attempts with cash recovered from squished Candylanders during your rampage.

On the one hand, for a light, casual title, Burrito Bison takes a long time to get to where you feel like you're getting somewhere. This adds to the game time, but like shoulder pads, or extra breadcrumbs in meatloaf, it increases the size but not the substance of the experience. On the other hand, Burrito Bison takes part in the trend of launch games where the player does more than hit the launch button and get a snack while the game plays itself. A mouse click here or there is all the game asks for, but that's all it takes to make the game a more involved experience than the typical launch title. This, combined with the game's giddy premise and EXTREME presentation, means that despite the grinding and repetition, I found myself firing launch attempt after attempt and enjoying it. Burrito Bison succeeds as a wacky bit of breaktime fun, for everyone's inner musclebound man-cow determined to squash all challengers.

I dont typically enjoy these types of games cuz they get boring quickly. I did like this one though, it was fun, entertaining and humorous. Did anyone notice on the third gummy land there is a darkish green gummy in the sky? Is this special? I cant seem to get it (yet) always going by so fast!

Best launch game I ever played. I couldn't stop, it was too addicting.

Great distraction - played this waaayyy too long at lunch. Got a bit too into it, mouse strayed out of play area while I stared unblinkingly at the screen and I kept opening the banner games. Oops.

Great launch game! It actually has *some* story and the upgrades are a great touch. Although, I do wish the developers would add a distance meter...

have you looked at the achievements for the game? if you click on the trophy on the shop screen you can see which ones you've unlocked thus far. the first time i encountered a dark green gummy, it was riding a rocket in the third world - when i touched it, i got the 'mix the flavours' achievement. i'm pretty sure that's the only reason it's there, to act as the rarest component of that achievement, but i could be wrong.

what a wonderful, frighteningly addictive game.

I found this one on Kongregate a few days before it showed up here and promptly wasted a couple of hours on it. So far my best escape time is around 1:15 or so, but I'm not really sure how I managed it. Seems to be mostly based on luck.

There is a kind of secret, dark greenish type of gummy that I found (I think it's in more than just the last place) which

gives you a lot of money if you hit it; and it is just below the cloud line.

Is that the gummy you're talking about, c?

@Brian Lutz - breaking the final wall requires a high speed, indicated by the bottom left pants-shaped meter. When the needle goes all the way to the right, the pants get hot (and if they're hot for long enough, you get the Pants On Fire achievement).

Strategy-wise, Is it better to use your rocket pants while in the air or near the ground? And I've also been trying to see if it helps with the ground vs. gummies, but I can't tell.

@LittleGhost: I think that if you use the boost in the air you get more aerial on the way back up, but if you're about to hit the ground then you can use the boost to avoid losing speed.

Did anyone else get a launch where the ground disappeared and the clouds and sky shifted down a whole bunch? The gummies were running on nothing. I can't tell if this is a glitch or not.

@Littleghost: I got the same glitch. It seems like the backdrop occasionally has some kind of error, but I don't know why it happens.

I spent far too long playing this!
I'd really like an unlimited mode with a distance meter, that maybe you could unlock once you've broken through the last wall.

Re: running on air. Don't think it's a glitch - just before it happened, I had a message about "let's pretend the ground is lava", so I think it's by design.

@folacin: 'Lets pretend the ground is lava' is a trophy you get for not hitting the ground in the first level, so I think this is a glitch. Ive only had it once and I've played this wayyyy too much.

I now have all upgrades and almost all trophies, but cant seem to get a mix of all flavours!

I don't think any of the achievements are especially rare, I got the floor is lava one and the mixed gummy one easily enough.

Pretty fun game, not too hard to grind through.

I cannot, for the life of me, get the "Let's Pretend the Floor is Lava" achievement on the iPhone. It's driving my crazy and I don't know what I'm doing wrong!