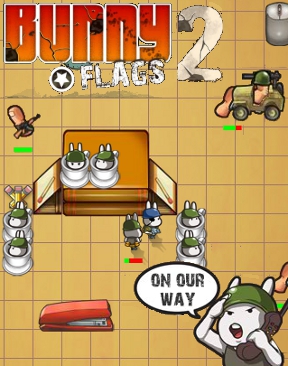 A good bunny's work is never done, especially when nobody else is willing to fend off a tide of disembodied giant thumbs. Bunny Flags 2 is the sequel to last year's Bunny Flags from Game Launch Project, a hybrid of shooting, strategy, tower-defense and malicious digits. Sound nightmarish? Difficult? Or just plain crazy? Could be all three! Just hope that Anya forgives you for this one, because you're going to be soundly in the "bunny camp" for the next while.

Your goal across several campaigns is to protect your flag from enemies, who will try to carry them away (or try to blast you depending on the stage), planting down towers and other defenses while you run around and handle things more personally; move with [WASD] (or [AZERTY] or [QWERTZ] if you change it under the options) and aim and shoot with the mouse. Initially you won't have much else at your disposal, but eventually you'll unlock more to work with, and you can select and place defenses with the mouse, or by hitting the appropriate keyboard shortcut. Take down enemies and you'll get sweet, sweet moolah you can spend on things like barricades to force the bad guys in a certain direction, or offensive towers to make your life a bit easier. Additionally, sweet success will also grant you skill points if you level up, which you can spend on any of the three talent trees to unlock new abilities or boost the ones you've got. If you're feeling particularly rad in the way that only pretending to be a fluffy killing machine can create, you can set the difficulty higher (or lower!) on any given stage before you play to get a bonus to any experience points earned.

If you were a fan of the original, or bunny-on-sticky-thumb violence in general, you'll be pleased to see that the sequel is a return to form. Dramatic music, clean, cartoonish design, and gameplay that provides for a decent amount of strategy without overcomplicating itself makes this one a solid title. It's definitely not going to be for everyone; shooter fans may be put off by the tower-defense elements that are necessary for victory, and defense fans may find the lack of tower upgrades forces them to be more hands-on in their involvement than they might like. If you have the patience to do a little level grinding, however, and don't mind your games not making a whole lot of sense, Bunny Flags 2 has the potential to suck away a good portion of your free time. Besides, come on... these thumbs are going around driving jeeps and throwing hadokens. If we don't stop them now, it's only a matter of time before they come for us.

the Sergeant's soldier with full Juggernaut and Weapon of Choice was extremely helpful throughout the entire game?

I like the idea of having different levels of play, but the implementation left a bit to be desired...specifically the "ramps" could be hard to navigate. Slight annoyance completely made up for by the fact that towers on higher levels will shoot at enemies on the lower ones.

@zazazu
nrly, actually ramp is really helpful. It makes the fingers unable to attack me from below (Hard/Challenging difficulty only)... Love this game XD

The game has really seen some improvements!
Hint:

You can create mazes of towers to slow down and grind the handies, best for gathering xp.