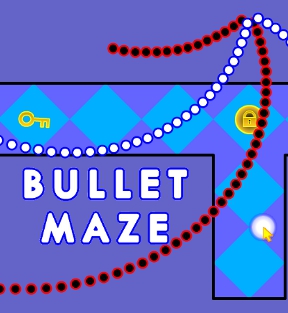 Gaming isn't always just about fun. Sometimes it's also about pain. Some games, like the Give Up Robot series or I Wanna Be The Guy, exist to punish you for having the audacity to try to beat them. Bullet Maze, a new twitchy avoidance game by Rhete with some inspirations from the shooter classic Ikaruga, is in this category and it's not going to take your crap. Instead it's going to wreck you with bullets. If you get through this one, you'll have earned it.

Use the mouse to steer your orb around and click to shift polarities. If you're white, white bullets can't hurt you, and vice-versa if you're black. Your basic goal is to get from the start of each level to the end, sometimes collecting all the keys in the level along the way. The problem is that there's never just one flavor of bullet coming your way, there's waves of both, so you need to constantly click and shift until you have a mental breakdown and get committed. Each level becomes a sort of puzzle; there's almost always a way to get through that involves carefully recognizing the pattern of bullets and working with it. That's often much easier in writing than practice, especially when it comes to the ludicrous Expert Mode levels.

There's also a great techno soundtrack by Cycerin that'll serve as accompaniment to your repeated failures. Expect to hear a lot of it as you bite the dust. If you're big on frustration games (it's okay, you can admit it) then Bullet Maze is here to be your next Everest.

Oh highdifficulty tag, how I adore your company. <3

Hm. After some thorough playing, a number of qualms:
-There should be an option to play with a keyboard. A lot of the time the mouse drifts unnoticeably off of the edge of the screen, thereby nullifying any clicks you should do, and sometimes you want to start a different colour to that which you are. Also, there's a lot of imperfection with the movement with a mouse.
-Slow connectivity/gameplay. Juttering about can be handled with fine, that's only to be expected, but when the game simply doesn't respond to clicks, in a game where it revolves around responding to clicks? Hmm..

Fun. Just a little irritating. Or maybe I just like my highdifficulty games to be perfect, maybe I've been spoilt by the likes of iwbtg.

The control scheme could definitely do with some work. In a game that demands such precision, to watch the orb chase after the cursor at its own leisurely pace is somewhat frustrating, and just generally feel as 'tight' as it should.

It's not so hard, except the expert part, but now my eyes hurts.

And I don't have any connectivity problems, despite I used to have some on flash games.

Even expert mode isn't so hard with a little expierience, but I'm really stuck on the 27th expert.

Nice game, but almost completes in one run, too bad.

Breezed through it easily, then hit expert level 27 and died over and over for a half an hour. I ain't giving up though, I'll do it eventually.

Its surprising that the level indicator in the upper right corner can be highlight with your mouse. Little things like that are incredibly frustrating in games like this one.

A great game, but disappointingly easy. I've beaten the normal mode without dying more than 5 times on one level, while in expert mode only 2 levels took me a little longer.