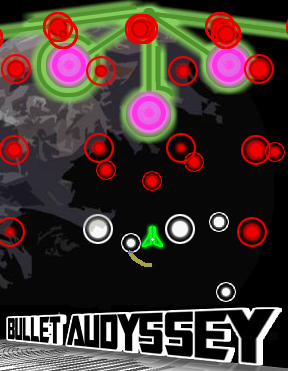 In Bullet Audyssey by Cellar Door Games, the Milky Way has been has been invaded by celestial soundsters, ones who send out their bullets to the structure of a thumping galactic rhythm. It's up to your tiny ship to weave your way through their forces, absorbing energy for your interstellar counterattack. Will world rave about your shooter skills, or will the alien force just leave you in a trance?

Each level consists of one large enemy at the top of the screen to destroy. Move your ship using the [arrow keys] to dodge enemy fire. However, try to make it close: bullets that graze your "aura" give your ship energy. You use this energy to fire back with the [z],. Also, holding [X], [.] or [shift] enters bullet-time mode, though this uses up energy as well. Beating each level upgrades part of your ship. Beating them all though... well, you might need to be Moby to do that.

Bullet hells and techno go together like chocolate and peanut butter. And while the world would hail the release of the first country-music-based shoot-em-up, you can't blame developers for sticking with a sound design that works. Bullet Audyssey is a considerably polished visual and audial treat, even if the difficulty gets insane (...even "Touhou-level") pretty fast. You'll need to start using every trick you've got round about level 6. Just remember that your hitbox is basically the pixel at the center of your ship, enemies follow the beat, and bullet time is very helpful. While definitely directed to the more hardcore demographic of the shooter audience, players of all skill levels should appreciate Bullet Audyssey's attempts at genre fusion, and techno lovers will definitely appreciate the introduction to some new artists.

Holy rave puns, Batman!
Also, the RPG elements are a nice touch. They give you a reason to strive for perfection besides bragging rights :)

That was pretty fun. Completed every level on the first go, though, so never did see what the losing-survivors thing was about.

As in a lot of these games, my biggest enemy was lag. Killed me more than anything else, which pretty much killed any chance of me trying to play it beyond the first few levels.

Strange, since I have the latest FF, Flash is updated, and I'm running a 2.4 ghz quadcore with a Sapphire video card... :p

Wow, you got skills Setia!! I'm just bumbling along but all the game mechanics in this are win.
Nice system for everything. Setia, have you played 'Echoes' from binary zoo?? That might have the difficulty you need.

My bad. I had complained earlier about lag, but it turned out my audio drivers needed reinstalling. Check your drivers!

It's tough, but claiming that it's "Touhou-level" makes me wonder how much Touhou you've played =P

Silliness aside, this game was awesome. Loved the risk/reward mechanic of the "overdrive" system, and the ability to regain lives by rescuing lost ships in previous levels is ingenious.

was really disappointing though. Not only was it really easy (I've memorized these patterns already!) but I was really hoping for some sort of crazy epic "boss song". That may be the DDR fan in me speaking, though.

I must say: this game has the best possible way of making you watch and actually read the credits.