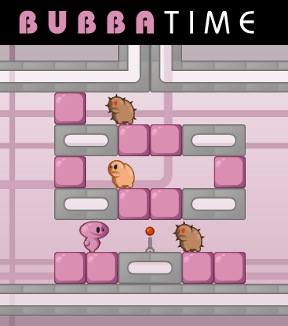 Fresh out of Santa Fe, Argentina, from a pair of developers who call themselves Killabunnies comes Bubba Time, a puzzle-platform game based on time manipulation. You play a fat, pink marshmallow creature that has dreamy, cartoony eyes (though don't they all). You have the power to create your own blocks as a stepping stone or a barricade, you can do the usual jumping and running, and you can slow down time. When you do, you enter a sticky realm somewhere between the gameplay of Bubble Bobble and John Woo's Bullet Time - you have entered Bubba Time.

The [arrow] keys move you left and right, allow you to crouch and move into doorways, as you may already expect. The [X] button allows you to enter Bubba Time, and the [Z] button creates or destroys a block. There are enemies, special blocks and switches; from these atoms the developers give you a big chunk of gameplay to bubba through until the time just passes you by. There are gears to collect for a special bonus, and most notably, the time distortions works differently in different rooms. Pull a lever to open up the exit, get there, and press up to enter, and find out what the next room has in store for you.

Analysis: This game was conceived for the CODEAR Mash-up contest held by the ADVA in 2009. The idea was to take a few different games and combine their elements into a new game. This game definitely borrows from the classic arcade game Bubble Bobble and also from Braid, the original 2D time-manipulation game. The game takes its time manipulation schemes from Jon Blow's opus, but breaks them down into more readily consumable bits of content. While Blow claimed his game had no filler, no redundant puzzles, Bubba Time isn't afraid to just be a fun web-game and give you lots of rooms to occupy yourself with. The visual flair is excellent and tight, so much so that you almost can envision a game of the depth of Final Fantasy Tactics coming out of this world and character, complete with pink time warpers of various stripes leveling up. Maybe that could be a sequel, though for a two-man team like this, I would rather see them come up with something totally new and continue to explore their muse.

So what are you waiting for? You know what time it is. It's BUBBA TIME!

Anybody know how to get through level 2. I am not seeing it?!

for level 2, if your problem is the weight-sensitive blocks,

Use Z to create a block on top of the weight-sensitive block, and that will free the block at the opposite end

Best online game I've played in a good while. Great, simple graphics and engaging puzzles. I didn't want it to end!

Fun little game. I got as far as (about halfway through) "Slow Me" before I stopped.

Good game. Reminds me of Braid. I don't really like the 'Simon Says'. I do like the 'Slow me' or Matrix levels where you slow yourself. I sort of wish they had a level builder - I'd want to play with the components.

Drat. Got stuck on one of the Simon Says levels, where I couldn't get anywhere, and yet couldn't die so that I could restart the level.

fnord, the escape key will bring up a menu with various options, including one to restart the level.

fnord: If you hit escape, a menu pops up where you can restart the level.

You can also turn off the sound by putting blocks in front of the speakers in Bubba's room, which I think was a really nice touch.

Any hints on the slowme level?

Aaargh.... I got all the way through the final levels, and I'm missing one gear. Do I really have to play through the whole set of levels again to find the missing gear? I can't find a way to skip a level I've already completed. :(

Why does the game let you leave a level without collecting all the gears, if you need them to finish anyway?

But aside from that, it is an excellent game.

Last gear is in possession of the thief himself. You can obtain it by physically eliminating him in the very last level, though you'll have to think of a way to recover the gear afterwards.

chipmunk: the missing gear is probably from one of the final stages; there are a few "hidden" gears. In particular,

on the "maze" level,

there are several hidden behind blocks, at least one of which is in a "room" you wouldn't otherwise need to go through

on the final level,

you have to kill the black-and-white-striped guy, and he'll turn into a gear

Thnx Jeannette.
Finally finished Simon said.
I must say I like this game very much. It's challenging but if you take your time it can be done. Although I can't a way to get the first challenge of Slow me

Before you finish the last level go back to bubba's room

I am not sure if this works before you start the last levels because I did not kill the bad guy at the end so I had to do that part again.

Anyways. Before completing the last level go back to his room, there is another level to complete. The wardrobe is ope, go in.

Then you get to wear a bunny suit.

Love the game. Got hooked on the simplicity of the lay out and strategy. Really had me thinking there for a bit hahaha.

level 3 or 4 of Slow Motion (middle right door from menu) has a cactus cannon shooting left on the bottom, towards a weight-sensitive block with a spiked walker on it - how do I kill him to call the elevator?

@MrMunkeePants
I am stuck on the same lvl. Any help?

For last gear:
Use the return in one of the 2 gap, then place a block and returen yourself. You are then able to collect the gear and finish the game!
BEWARE: Don't have a block in the second gap or your stuck.

I can't pass the first level of return.