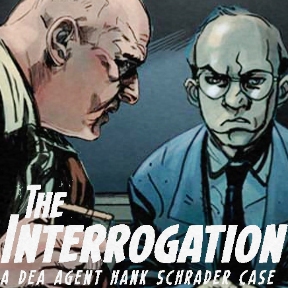 When a fire reveals a sinister secret in the basement of a church you, as D.E.A. agent Hank Shrader are brought in to work on the suspect in The Interrogation, an advergame mystery designed to promote the television series Breaking Bad. Never seen the show? Don't worry, this is strictly a standalone story. Throughout the game, you'll be presented with sets of dialogue options to choose from. Essentially, you're trying to figure out what to say to the suspect (and how to say it) to get him to trip up. Pay close attention to the suspect's impression and body language; push too far too clumsily and he'll "lawyer up", bringing your investigation to a premature end. If this happens, you can start the entire game over from the beginning (meh) or just start over from the chapter you failed on (hooray!). If you want clues as to how to treat your suspect, you can refer to the notebook in the lower left corner of the screen.

The game consists of five chapters, and I personally breezed through them in about fifteen minutes. One way to look at it would be to say that I am an amazing detective, which is correct. But the other, less flattering way to look at it is that the game is actually very easy. It doesn't take much logic or people skills to pick the correct sequence, and in fact you're not required to actually deduce anything yourself. Once the suspect accidentally reveals more than he intended, the agent pounces on it and makes the connections himself; it's mildly disappointing, since it can make you feel like you're doing little more than pushing buttons, something easily achieved by setting up one of those little drinking bird toys at the keyboard.

As an experimental piece of interactive art, sort of, The Interrogation is an all too brief but interesting diversion. One of its biggest strengths is easily the art, which reminds me a bit of Steve Dillon, and a bit of Chris Bachalo; the expressive, realistic characters combined with the fat ink lines lends the whole thing a nice, sketchy appeal. It isn't exactly what you might call a typhoon of breathless action, but it's an interesting idea that could do with some expanding; more cases, with more suspects in each one, and maybe a bit more puzzle solving required on our part. If you're looking for a bit of gritty police procedural in your day, The Interrogation offers a bite sized chunk with an interesting story to back it up.

Is there a way to convict Hadley?

He. Finished the first five chapter on the first try, but the last one! I had to do it, like 10 times.

[Speaking as someone who is flying free and Twitterless, no, you do not have to have a Twitter account for this at all. - Dora]

Are there multiple endings, or just the one where

you figure out his crime but don't have enough evidence, so he walks.

Anyone got a walkthrough?

Why am I reminded of Phoenix Wright...?

The last chapter was ridiculous!

Internet cut off when the game perhaps still half loading. I stuck with only able to look at the note, flip, and close it. Or am I missing something? I think I have clicked everything :/ .

It seems there is one and only end.

I got through all but the last chapter fine, and it only took me 1 more try to get through the last. I think the different endings are if you quit once you fail a chapter or if you keep going. idk.

Ask a background question to start

Flatter him and ask about his job

Flatter him; see if he has a dark side

Speculate about his vices

Genially admit you'd gamble if you were him

Feign sympathy to see who knows he gambles

Politely ask how well he does gambling

Flatter him and ask about his salary

Feign sympathy and ask about his expenses

Feign sympathy and ask where he lives

Feign surprise at his finances

Chapter 3 - Under the Gun

Show trust and ask what he knew

Ask what he knows about the gang

Flatter him and ask how smart the gang is

Speculate about his role in the gang

Ask for his help with a photo

Ask him to speculate on Teeter

Play along but ask again if he saw Teeter

Ask if Teeter's connected to the fire

Genially ask what he thinks

Guilt him and ask about the guns

Ask how he knows about guns

Chapter 5 - An Accident Waiting to Happen

Ask him about the victim

Ask him why the victim was at the church

Ask him to speculate why the fire started

Speculate about how the fire spread

Guilt him and ask how the victim died

Ask him about the murder

Offer to help him and ask for more info

Caution him about gang

Caution him and ask him to testify

Push him to help the government

Appeal to his morality

Reason with him to get him to cooperate

Of course, I'm sure there's many other possible solutions. This is just one of them.