Everybody wants to rule the world, and zombies are no exception. In Brainsss, a wild sort of mobile game by Lonely Few, you get to help the zombies start their plot for world domination. Part strategy, part action, part brains, you must lead and grow your zombie horde to complete the goal for each level. Humans just don't get it. Life is so much simpler if all you need are brainsss. 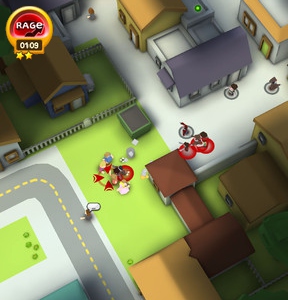 Brainsss is divided into phases, each with several stages and the first serving as a tutorial. Each level starts out with a few zombies to get you going. Simply draw a circle around the number of zombies you'd like to control and they'll outline in red. If you've selected too many, or want to divide your group evenly, you can de-select half of the currently selected group with the tap of the button. Once you've chosen the number of undead you'd like to control, tap anywhere on the screen and your mob will shamble along, ready for brains!

Your objectives change depending on the level, but more often than not, your main goal will be to turn every human into a zombie, prevent humans from escaping a building, or stay alive until the timer reaches zero. The humans you have to catch are varied, ranging from super fast scientists to firemen who can stun you and chop you to bits with their axes. Examine the level, then plan your attack accordingly. You get to decide if it's better to split your forces and trap people or if there is safety in numbers.

When you clear a stage, you are awarded stars according to how well you did. Not only do stars unlock more phases, they also earn you coins to buy level specific power-ups if you get stuck. Don't worry, you'll always get at least one star for making it through alive (or dead, depending on how you look at it). One handy thing to know is how the rage meter in the upper corner works. When you convert humans to your side (and also as you destroy their desks, garbage cans, etc), the rage meter goes up. When it is full shake your device or tap the meter to give your zombies a boost in speed and attack power.

Even with rage activated, it can be difficult to overcome the humans who want you dead. This can be frustrating, as the only way you lose a level is if every last zombie dies. It can also be aggravating on the bigger maps to switch back and forth between groups if you've split up your horde. However, there is a nice, (almost too) happy, soundtrack to accompany you, along with funny quips from the humans as you chase them down. Add on the amusing comics that unlock between phases, and the promise of new levels coming soon and you've got a game that is nearly impossible not to enjoy. Now get out there and use your Brainsss to start making zombies!