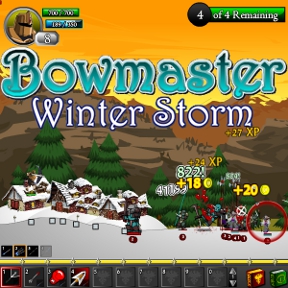 It's been five long years. Your string fingers are twitching and your quiver's full with freshly fletched arrows. You're ready to play the newest release by LostVectors. It's Bowmaster Winter Storm! For fans of the previous BowMaster Prelude, you'll see a lot of familiar aspects of the game was carried over. One major change in gameplay is the addition of the easier point and click method of aiming versus the pull string method, which gives a more authentic feeling of the archery theme. Choosing the pull string option does give you more gold when you earn shot bonuses, so you're not putting yourself through the difficulties for nothing. Aiming and shooting is all done with the mouse, and you use [WASD] to move your character around and [spacebar] to jump. [Q] and [E] switch between shooting with a higher or lower trajectory. This mainly comes in handy when trying to avoid shooting characters (like scouts) between you and your target.

This game has a lot of customization as far as the direction your character can take as they level up in rank. At the beginning, you will be given a choice of class: hunter, destroyer or mage. The game remains the same, it is just your attributes (arrow reload times, damage dealt, etc.) which change. So if you're more of a twitchy shooter, the hunter may be the class for you. Perhaps you're all about playing female characters. Hey, no judgment here, just choose the mage class. Once you've started playing and first purchase upgrades, you may be overwhelmed by the sheer number of skills at your fingertips. Just let your arrow rest and take a moment to peruse the selection. Hovering your mouse over each option will pop up a box showing the stats for that skill as well as display the requirements at the bottom and whether or not you've met them. The first tab will contain the more familiar upgrades such as the flak bomb arrow. The next tab down has all the options for your army. That's right, as before you can send out minions of your own to fight the enemy. Be aware that this will compound the amount of things you need to pay attention to on the battlefield.

The game starts you off at your home and begins a tale of an old enemy out in the land again. Between levels you will see your progress along the game and also see the type of quest the level is. These range from the defensive 'Protect the Allied Scouts' to boss fights with a single enemy. While the goal of each level is set, the terrain is randomized, so if you're finding it hard to complete a battlefield quest on an open plain, perhaps the next time you'll be given towers or trees from which you can shoot. Those of you who loved the first Bowmaster will pluck at the upgrade to the graphics and music, and those of you who never experienced it will simply find a good defense game in Winter Storm. Just perhaps it'll even have a few of you who rage-quit Prelude quivering with excitement at a second chance to love this series... and possibly smile at the subtle archery puns in this review.

Can't seem to get past the loading screen. Using Firefox...

Is this running incredibly slow for anyone else in Chrome? I have a pretty nice system (I have no problem running most new PC games), and this slows down to an absolute crawl pretty frequently.

I'm using chrome and it seems fine. But what are build points?

It's nice to have some variety in the campaign, and the updated graphics are neat, but there's still a few bugs to work out. First of all, it slows way down when too many enemies are onscreen.

Also, the rate at which you level up is uneven and unexciting. You have to wait until level 3 (which is about 5 in-game levels) to get *any* cool arrows. Once you get the elemental arrows, they're all fairly nice and varied, with satisfying effects. The bomb arrow, in particular, will hilariously smear enemies across the landscape. But once you have those, you have to wait until level 13 to get anything good. The Burst Arrows are a total joke, only good at sweeping up the debris from enemy attacks. The Light and Dark arrows have no special features whatsoever. So for almost the entire lower half of the map, all you get to do is tweak your basic elemental arrows.

In Bowmaster: Prelude you could save your money and start calling down meteors and catapults in a few levels. I'm at Rank 12 and I can't get a measly lightning storm. This level progression has no excitement.

Okay, I was doing fine until level 26, where I suddenly hit a brick wall. You have to duel a ridiculously powerful dark mage. His attack takes off almost all your life in one burst, he spams it very quickly, it homes in on you flawlessly, and you can't shoot down the blasts! How the heck can I beat him when I die in two unstoppable attacks?

@Aegeus. Does the Term "Alpha Strike" mean anything.?

Seriously, re-play till you can afford enough to up your mana enough to fire off one of everything, and as soon as he appears, let him have it with *everything*

Gets kind of repetitive. And the bosses are all super easy to take out with any one of your "ultimate attacks". The minor elements (earth, lightning, poison, cure) are completely useless.

how do i get back an attribute that had disappeared. I had clicked and held it to move to a differant location in line up, but i accidentally let it go in the playing area, now it has just disappeared.

Tremendously hard! I am at the first boss, and at his second strike i am dead, what am i supposed to do? Is there a way to grind?

@everyone talking about how hard a boss is
The bosses we get are randomized every time. We can't help you :P
Omni blast is incredibly useful for cleaning up toxic/burning spills.

Just max off the rapid shot for the piercing arrow, the basic arrow, and the fork arrow, in that order. When a boss appears, just let him have it with all three in succession. You can get this done about a third of the way through the game and it'll flatten anything in front of you in one or two volleys.

re: boss fights. run to the other side of the map. the boss will only attack with his ridiculously deadly bouncing balls of death if you are on his half of the map.

this game is fun but needs to be balanced a little better. levelling is uneven and bosses are still stupidly difficult.

@loudude: That happened to me too. What I did to get back a 'lost' attribute or skill: Go into the 'skill book'-menu while playing, the skill should be still there. Just drag it back into your combat menu at the bottom of the screen. By the way: you can re-arrange your skills there too. Quiet handy when you realise after some playing that you have favourite and extra useful skills. Just put them first when you need them more often.