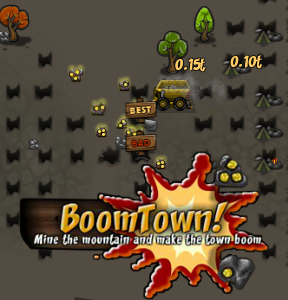 The Podge is at it again, dipping their hands of game making magic into a resource management, simulation, Boom Town. Come for the explosions! Stay for the gameplay! You play as a frontiersperson who's out to mine some gold and build a town while you're at it. You'll have to keep an eye on your mining operation (and drive the ore truck) while ensuring people continue to move onto your land, earning you more money. Most of the selections are done with the click of the mouse while driving the truck and scrolling the screen happen with either the [arrow] keys or [WASD].

In the beginning, most of your cash will come from selling the gold you mine by setting off various forms of dynamite on your land. After the ore is blasted to the four corners of your property, you then have to drive your little ore truck to pick them up. Of course, it can't be as easy as finding each piece, you also have to keep an eye on how much ore your truck can carry before having to return to the Drop Zone and also how much fuel you have left in the truck, both of which can be increased by purchasing upgrades. The day will end when you've either collected all the ore or run out of gas.

On the other side of this game is creating your bustling village. As you progress through the game, you'll unlock various buildings you can place on your land which will attract new residents. Some of them will only increase the likelihood of immigrants while others will also earn you cash based on how many people live in its area of influence. And of course people like variety in the amenities available around them.

Despite the two seemingly different aspects of this game, The Podge has done a wonderful job joining them together into a well-made package. While it would have been nice to have had a wholly mouse controlled scheme, other polished areas make up for it (the music just makes me want to wear plaid, overalls and some heavy boots). Once you've ironed out a strategy for keeping up your funds as you dig for more gold, you'll easily find yourself spending 100's of game days at it. Now y'all will have to excuse me; I've gotta hop back on ma big rig and git back to minin' some gold!

Fun game, but I just wish there was a way to skip the blowing up part.

Oh, hi there totally addicted. I forgot what you looked like... The [insert miner phrase here] holes getting bigger as you blow up gold-rich dirt is gratifying.

Caution that it does turn into a hidden-object game if you lose track of nuggets and other items. Great that it auto-closes the scene once all the ore is found! Huzzah.

Also: eeeek, you can blow up the town? Some vegetation can also be driven through. Those trees must be made of plasma or something, I haven't figured out how to reach that ore there. Ore can also be blown clean off the map. Inviting so many idioms.

I think this game is COMPLETELY addictive. The updates are well-placed, by having to balance between city building, buying land, and upgrading your supplies gives this an interest/investment ratio that is extremely high.

Three hours in, and I am still going.

That being said, @Lizz, the "blowing up" part isn't what bothers me...I enjoy that. It is the pressure of watching my fuel tank drop while trying to collect my gold, that has kept me addicted.

Next time I'll start blowing up closer to town. Once it's established, it's hard to find nuggets.

how come i cant move my truck? i look online and no one else is having this problem.